Picture postcards from a mountain oasis

Climate change is making it tougher, especially for women, to live in the Miyar valley in the high Himalayas

All photos by Sucharita Sen.

Located in the North Western tip of Himachal Pradesh, the Miyar valley is part of the dry Tibetan plateau. It’s an oasis in this cold desert, thanks to the Menthosa glacier. But it’s an oasis under threat, as the time of year when the glacier melt is at the maximum has been disturbed by climate change.

The author, a part of the team, clicked these photographs during a recent visit in connection with the study.

Adaptation to a climate with snow cover for three to four months comes naturally to the residents. Greens and other food are dried and stored for the winter.

Fuel for heating and cooking is usually stored in the backyards or the roadside. Willows are grown for this purpose.

“It does not matter to us women whether it rains or snows at unexpected times,” says this resident of Miyar basin when asked about the effects of climate change. “We have to do most of the work irrespective of the weather conditions.” 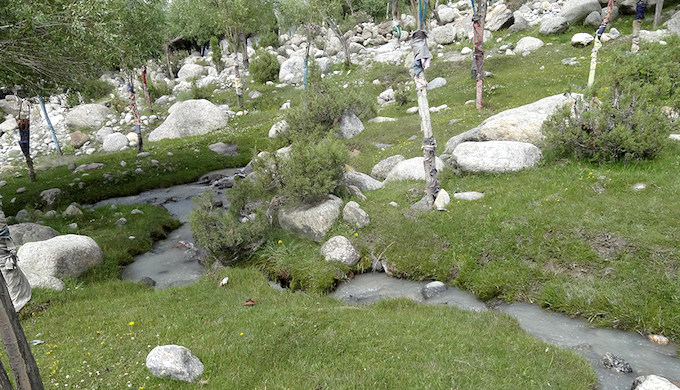 Food is grown with water that flows through these glacier-fed channels, called kuhl. The melting of the snow is another crucial source of moisture in the soil. Till recently, the kuhls were made and managed completely through community action, with the division of labour shouldered equally by all cultivating households.

The rotation of water supply from a kuhl to individual farms is decided by a simple lottery – write numbers on bits of folded papers in one box and names of farmers in another box, and then pick from the two boxes. On the right is a close-up of the results. The list is written out by members of the Yuva Mandal, an organisation of men.

There are strong gender divisions despite the presence of a Mahila Mandal, an organisation of women. Members of the Mahila Mandal gather here to cook for a community festival. The JNU study team found one instance where the Mahila Mandal had taken a major decision – on how to use a degraded forest. Other tasks are extensions of domestic work, while members of the Yuva Mandal are meant to deal with “productive activities”, say the residents.

Over the last two decades, agriculture in the Miyar valley has moved to commercial crops, mainly peas and potatoes. All the peas that are grown are sold.

Women do most of the agricultural work, for their family farms and also as “exchange labour” in other farms. Rarely do they get any monetary wage.

Men, on the other hand, are engaged primarily in market transactions, as seen here, selling peas to contractors. Many of these men reported a decline in the yield of peas in the last five years or so. Some think one reason may be higher incidence of pests and diseases due to increased temperature.

In the Miyar valley, willow trees have been dying in large numbers. Some of the local men think it may be due to increased temperature. Most women say they have not thought about the reason.

Sucharita Sen is Executive Director of the South Asia Consortium for Interdisciplinary Water Resources Studies and a professor at Jawaharlal Nehru University. Views are personal.

By Mayank Aggarwal
India proposes to open 52 new coal mines of at least one million tonne capacity each, which could increase the country's methane emissions by 45 million tonnes in 20 years
END_OF_DOCUMENT_TOKEN_TO_BE_REPLACED

By Soumya Sarkar
High heat and humidity will take an increasing toll in death and ill-health in India and other tropical countries unless global temperature rise is limited to 1.5 degrees Celsius
END_OF_DOCUMENT_TOKEN_TO_BE_REPLACED

By Deepa Padmanaban
Climate change has hastened the melting of snow in the Himalayas in recent decades, creating unprecedented vulnerabilities that scientists are yet to fully understand
END_OF_DOCUMENT_TOKEN_TO_BE_REPLACED

By Joydeep Gupta
Climate change made the Uttarakhand flash flood in the Indian Himalayas possible, and poor development policies on building dams and roads made it disastrous
END_OF_DOCUMENT_TOKEN_TO_BE_REPLACED

By Soumya Sarkar
The United Nations has warned that immediate action is needed to face the triple environmental emergency of climate change, biodiversity loss and pollution
END_OF_DOCUMENT_TOKEN_TO_BE_REPLACED

By Joydeep Gupta, Soumya Sarkar, Varsha Singh
As the world warms and glaciers retreat faster, there is need to brace for more disasters and minimise impacts by reviewing ill-planned dams and roads in the Himalayas
END_OF_DOCUMENT_TOKEN_TO_BE_REPLACED

By Deepa Padmanaban
Rising temperatures are changing the water cycle, with less water is being replenished in river basins in the Himalayas, which has serious implications for water security in India
END_OF_DOCUMENT_TOKEN_TO_BE_REPLACED