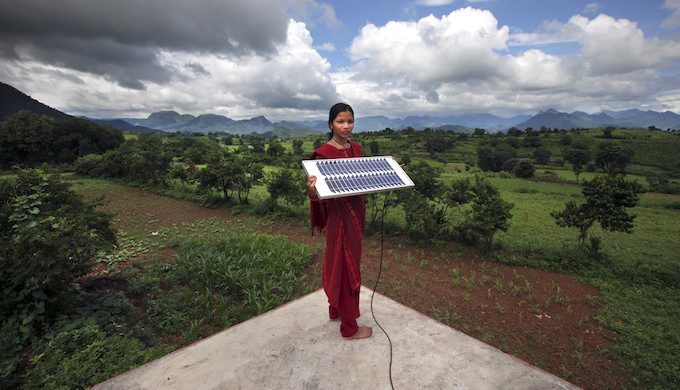 Off-grid electrification in India is likely to suffer a blow. (Photo by Abbie Trayler-Smith)

India’s new indirect tax regime is posing a threat to the country’s clean energy mission. In the latest move by the government, tax money generated through the coal cess, a tax meant to fund clean energy projects, is being used to compensate states for incurring losses related to the introduction of the new Goods and Services Tax (GST) system.

The idea behind collecting the coal cess was that the money would feed into the National Clean Energy and Environment Fund (NCEEF) to help boost renewable energy, thus compensating for the pollution caused by the use of fossil fuels.

But the mammoth fund that was collected for renewable energy innovation, deployment and technology has been brought under GST and is being used for a policy that has got nothing to do with the environment.

Reports suggest that a whopping amount of unspent clean energy fund, INR 567 billion (USD 8.9 billion) is being spent to smoothen out the consequences of GST. There are also reports that the NCEEF may cease to exist from the next financial year starting from April 2018.

The move has drawn criticism from the India’s trade coalition for the decentralized renewable energy (DRE) sector. The Clean Energy Access Network (CLEAN), which represents 110 organisations including energy enterprises, community organisations, R&D institutions and policy think-tanks in the DRE sector, has voiced its concern that the decision of diverting clean energy fund for another purpose will impede the growth of DRE, which is to play a vital role in achieving the goal of 24/7 Power For All by 2022 and the last-mile rural electrification in areas that are still not connected to the power grid.

“Unfortunately, based on earlier report done by a leading news organisation, there are indications that sources within the ministry have indicated that the fund may lapse, which is a disturbing fact,” Surabhi Rajagopal, analyst, CLEAN, told indiaclimatedialogue.net.

“CLEAN and its members believe that it is not advisable to divert funds that would contribute to R&D in renewable energy and could directly impact India’s transition to a clean energy future. Recognising that compensation of GST loss is important, the Network calls on the Government to retain an appropriate percentage of funding from the coal cess toward clean energy development, on a continuing basis,” CLEAN said in a statement. “The DRE sector of India stands ready to work with the public and private sector to scale last-mile 24/7 electrification for the 304 million Indians still living without power.”

According to the Draft National Energy Policy by Niti Aayog, with nearly 304 million Indians without access to electricity, and about 500 million people still dependent on wood and dung for cooking, the country has to still go a long way to meet its energy security objective. The National Energy Policy has also suggested creation of a central Energy Access Fund to facilitate rural electrification. But now uncertainty looms over its funding as well.

“Where will the money (for Energy Access Fund) come from? Subsidies were being given on selected solar schemes such as solar water pumps and rooftop solar and the money was coming from the Clean Energy Fund since the last two years,” Rajagopal told indiaclimatedialogue.net. “Now what will happen to the budget of MNRE (Ministry of New and Renewable Energy)?”

But the government is to continue with the collection of coal cess while there is no clarity or any official statement on if or by when the funds to accelerate deployment of renewable energy will be reinstated.

“We have not heard anything from the government on this. These funds are crucial for capacity building, for innovation and technology, for use of clean power in motor based applications and healthcare equipment. But now aspects of innovation and deployment of rural energy access are going away with it,” added Rajagopal.

There are also concerns that with the funds being packed off, it might become difficult to procure not just the subsidies but loans to install solar as well.

“MNRE gives funds to NABARD (National Bank for Agriculture and Rural Development) which in turn disburses to various banks that help people opt for various solar schemes at grassroots level. But when decentralised off-grid solar programme was stopped for a year recently due to financial crunch, it led to banks losing confidence in off-grid solar schemes and a similar situation might get created again,” Rajagopal said. “It is also a setback towards achieving INDC targets. It is especially going to drastically impact innovation and technology that is crucial for both large- scale renewable power based projects and decentralised. Clean energy access is at the cusp of environment and development.”

INDC, or Intended Nationally Determined Contribution, is the pledge that India made for the 2015 Paris climate agreement.

Further, due to GST, clean cooking solutions will now pinch the pockets of rural population even more. Smokeless stoves that are crucial to combat indoor air pollution caused by inefficient biomass burning for cooking and are much needed for the health of economically weaker sections of the society are now part of GST which would lead to an increase in their cost thus posing another setback to India’s clean energy agenda.

To ensure that the country’s ambitious clean energy goals stay on track, CLEAN has called for the government to retain continuity of the funds and to ensure that that decentralised solar energy remains in the mainstream energy agenda.