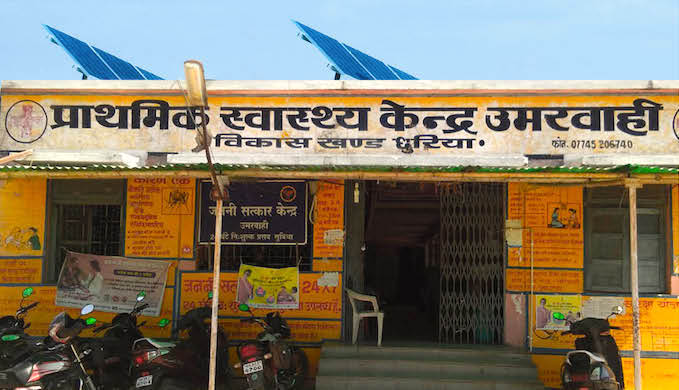 A solar-powered primary health centre in Chhattisgarh. (Photo by CEEW)

Primary health centres in Chhattisgarh powered by solar panels catered to 50% more patients than centres that did not have similar installations, and helped twice the number of child deliveries every month, a study by the Council on Energy, Environment and Water (CEEW) has revealed. The findings point to a route map of how primary healthcare delivery, which is plagued by no or erratic power supply, can be dramatically improved in India by using renewable energy.

The CEEW study funded by Oxfam is based on an evaluation of 147 primary health centres (PHCs) in 15 districts of Chhattisgarh in central India, which included 83 that had installed solar photovoltaic systems. Although Chhattisgarh is a power-surplus state, a third of all PHCs either do not have electric supply or suffer from frequent power outages. About 90% of PHCs reported power cuts during peak operating hours and one-third of them experienced power cuts in the evening, the study found. Significantly, more than 21% of the PHCs reported damage of medical equipment due to voltage fluctuations.

India has about 25,000 PHCs, according to the Rural Health Statistics 2016. Of the functional PHCs, 4.6% do not have power connections, which affect some 38 million rural households depending on them. One out of every two PHCs in the country suffers from unreliable power supply or has no electricity access at all, according to District Level Household and Facility Survey data. Unreliable and poor-quality electricity supply limits diagnostic and treatment services, reduces hours of operation to daytime, and forces patients to travel a longer distance in search of better healthcare.

“Scaling solar systems across PHCs is in India’s interest as it meets the targets of the National Solar Mission as well as the National Health Mission,” Arunabha Ghosh, Chief Executive Officer of CEEW, said in a statement. “While installing solar systems, priority should be given to power-deficit PHCs, especially those that have been designated to provide 24×7 services. Solar systems for PHCs must also be tailored to local needs and considerations.”

The economics of solar powered health centres are also attractive. In Chhattisgarh, 90% of the solar-powered PHCs reported cost savings from not buying diesel. Electricity generated by diesel costs INR 24-26 per kWh while solar plus battery costs around INR 12-14 per kWh, CEEW said.

The ability of solar-powered PHCs to operate cold chain, storing vaccines and drugs, and newborn care equipment also improved significantly in Chhattisgarh. Almost 25% of power-deficit PHCs currently relies exclusively on solar as a backup to run cold chain equipment. Ensuring continuous electricity supply to cold chains at PHCs is critical, especially in rural Chhattisgarh, where the infant mortality rate (43 per 1,000) is higher than the average for rural India (41).

Providing 5kW solar systems to all PHCs across India could contribute to about 160 MW of India’s target to install rooftop solar. If solar power were to be extended to cover all sub-centres (1 kW systems) and community health centres (8 kW systems), the total potential would be about 415 MW, CEEW said.

By Soumya Sarkar
The drop in global carbon dioxide emissions driven by the coronavirus pandemic could be lost once the crisis blows over, unless we shift to cleaner energy
END_OF_DOCUMENT_TOKEN_TO_BE_REPLACED

By Jillian Du, Robin King, Radha Chanchani
There is an urgent need to address shortcomings of social distancing and hand washing in crowded cities with unequal facilities that will help build better resilience to future crises
END_OF_DOCUMENT_TOKEN_TO_BE_REPLACED

By Parvathi Preethan, Shubham Gupta
Zero budget natural farming is gaining traction in Andhra Pradesh, but much larger financing is required for this climate-resilient practice to bring about significant change
END_OF_DOCUMENT_TOKEN_TO_BE_REPLACED

By Soumya Sarkar
Although India added 8.1 GW capacity of coal-fired power plants, the rate of growth is slowing significantly, even as renewable energy becomes cheaper in the country
END_OF_DOCUMENT_TOKEN_TO_BE_REPLACED

By Soumya Sarkar
Billions of people will suffer from water stress and deprivation that is aggravated by climate change, the United Nations said in a report on World Water Day
END_OF_DOCUMENT_TOKEN_TO_BE_REPLACED