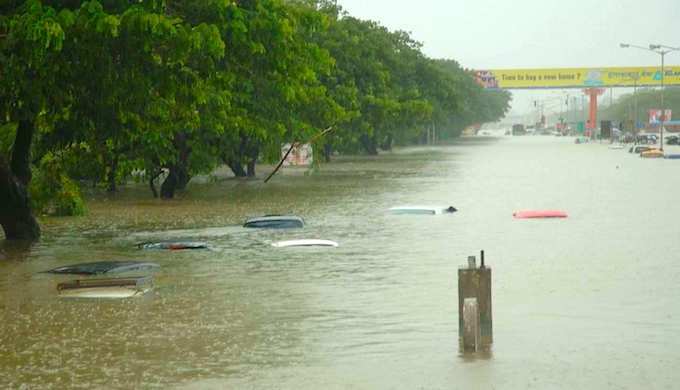 Submerged cars after a heavy downpour in Mumbai. (Photo by Apoorva K.)

The past three months have seemed apocalyptic the world over. The storm season in the Atlantic Ocean continues to draw grave concern as hurricane Irma wreaked havoc in Florida, and hurricane Jose threatens to make a comeback next week. Already, hurricanes Harvey and Irma have claimed 97 lives in Texas, the Caribbean Islands and Florida, leaving behind an expanse of devastation.

Meanwhile, an earthquake of 8.1 magnitude — touted as the strongest in a century — hit Mexico, claiming up to 90 lives and damaging property across the poorer south. On the other side of the globe, in South Asia, the monsoon claimed more than 1,200 lives in India, Bangladesh and Nepal, and left millions displaced and homeless.

Indeed, climate uncertainties and the frequency of 100-year and 500-year extreme weather events are on the rise — an indicator of climate change. And, living in one of India’s densest cities, Mumbai, we constantly ask one question — are we prepared?

How prepared are we?

On August 29, Mumbai received 315 mm of rainfall in about 12 hours, bringing the city to its knees. This was recorded as a third of the rainfall received by the city in the last historic flood of July 2005, a reminder and an evidence of how unprepared our cities are to face extreme weather events.

Mumbai has a population of 12.44 million, and a workforce of 5.8 million people. A significant population work in the Island City with more than two million people using the suburban railway to commute to and from work every day. When a disaster hits Mumbai at midday, while most people are at work, a failure of all transit modes occurs, leaving people stranded at railway stations or in chaotic traffic jams.

Social capital is an asset

The story of the aftermath of a disaster in Mumbai has always been that of resilience. Rescue operations are often crowdsourced, organised locally and systematically, and once the waters calm down the city quickly resumes normalcy. This August too, when the disaster struck, most of our social media news feeds were flooded with people offering their homes for stay; religious institutions, schools and hospitals opened their doors for shelter and food. News channels, and civil society organisations published helpline numbers for emergency relief and rescue for each ward in the city. The city had come together once again.

This time however, with stories of social capital in the city, there was a lot more anger, criticism, and sharp questions to the Municipal Corporation of Greater Mumbai (MCGM). It was obvious to most that the Corporation had failed in managing the disaster effectively.

As in most Indian cities, Mumbai’s disaster management measures have always been reactive in their approach. Monitoring weather activities, pre-monsoon, de-silting of storm water drains and nallahs, ensuring that relief and rescue measures are planned institutionally within the MCGM, with little to no participation with residents and the workforce in the city.

Disaster management plans are often laid out within the corporation, with no community engagement, not only overlooking the city’s potential for participation, but also exposing the corporation to complete failure. Mumbai’s biggest challenge is safely evacuating 5.9 million people during a crisis, when all critical infrastructures are failing. Maybe the challenge is not to get home safe, but to reach a shelter safely and remain there until the crisis has subsided.

The MCGM should undertake five steps in the short-term, to effectively manage crisis situations in Mumbai, to prepare us to take on the global challenge of climate change. This includes:
* Map the workforce (formal and informal labour) in each ward, to understand how many residents will be travelling back home during a disaster.
* Map the number of slum residents, and homeless population most at risk and in need of shelter, for each ward.
* Map religious institutions, schools and other civic institutions that can be used as emergency shelters in each ward. Match these with the number of people in a ward who may require emergency shelter and food. Engage civil society organisations, merchant associations, and resident welfare associations in each ward, to co-develop ward-level disaster management plans.
* Local organisations, community groups, and religious trusts can play a critical role in disseminating information, hosting mock-drills and community meetings, and setting up early warning systems on social media portals. This will help building faith and accountability in a new system in a city as large, dense and complex as Mumbai.
* Finally, develop guidelines for a ward level protocol that details out the disaster relief and recovery plan for each ward, and share these with residents and businesses in the area.

At the time of disasters, people come together in more ways than one, establishing that the foundation for disaster relief and recovery is the social capital, one of Mumbai’s strongest assets. This needs to be used before a disaster, not just during a disaster or afterwards.

Cities the world over must realise and leverage their social capital to shift from a reactive to a proactive disaster management approach. Proactive planning that includes communities and people in the process will help citizens adapt to climate change. The Mumbai example shows that people are willing to help, if the city authorities open up and allow for more participation.

Lubaina Rangwala is Managing Associate, WRI India Ross Centre for Sustainable Cities. She has over 10 years’  experience working as a planner, researcher, and a teacher in non-profit organisations and academic institutions in India and the United States.

Madhav Pai is Director, WRI India Ross Centre for Sustainable Cities. He has over 15 years’ experience in leading, designing and managing urban transport programmes and projects in India, elsewhere in Asia and the US.

By Shally Seth Mohile
Weak consumer appetite, lack of charging infrastructure and a high payback period is holding back adoption of electric cars for personal use in India
END_OF_DOCUMENT_TOKEN_TO_BE_REPLACED

By Soumya Sarkar
In a promising outlook for light mobility, penetration of electric 3-wheelers in India may rise up to 75% by 2030, followed by 2-wheelers at 35%
END_OF_DOCUMENT_TOKEN_TO_BE_REPLACED

By Soumya Sarkar
Renewable power is surging despite the Covid-19 crisis and is on track to become the largest source of electricity by 2025, ending the dominance of coal
END_OF_DOCUMENT_TOKEN_TO_BE_REPLACED

By Anjali Notandas
Concerned about the dangers of climate change and environmental degradation, children in India have taken to activism, demanding their rights to a better future
END_OF_DOCUMENT_TOKEN_TO_BE_REPLACED

By Soumya Sarkar
The rapid warming of the Indian Ocean due to climate change is leading to more cyclones pummelling South Asia, as storms gather more quickly and become more intense
END_OF_DOCUMENT_TOKEN_TO_BE_REPLACED

By Soumya Sarkar
The locust swarms that destroyed farmlands in western and northern India are linked to the warming of the Indian Ocean. Such proliferation is more likely as rainfall patterns change
END_OF_DOCUMENT_TOKEN_TO_BE_REPLACED

By Nambi Appadurai
We have to invest in resilience-building measures, especially in health infrastructure, and weather and disease forecast systems, addressing training and adaptive capacity needs
END_OF_DOCUMENT_TOKEN_TO_BE_REPLACED