Kerala, which tops many development indicators in India, has broken new ground by training elected municipal and village leaders to tackle and mitigate challenges thrown up by climate change 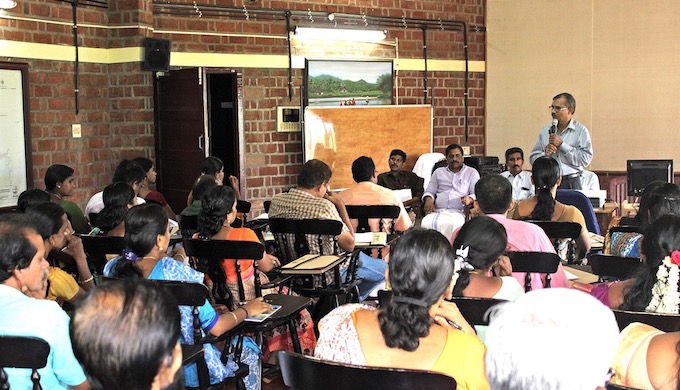 The southwest monsoon was inadequate over Kerala in 2016. The northeast monsoon of 2016 was a near total failure. The summer of 2017 was severe, with the usual green landscape of the state having turned yellow and brown. The rice fields were dry and the rivers were unusually low on water.

Then it rained during the southwest monsoon of 2017. Although the rains were intense and long, the India Meteorological Department data shows that the amount has been deficient compared with the normal in 10 out of the 15 weeks since the southwest monsoon started. From June 1 to September 18, Kerala only received an average of 1,746.8 mm against the typical figure of 1,925.3 mm.

The sharp fluctuations of the past two years have brought into focus the unreliability and climate variability that could become the new normal in the state in the coming decades with a changing climate. Even though the state received heavy showers for three days starting September 15, the unreliability is affecting every aspect of the life of the state’s residents.

The uncertainty finds expression in the activities of village and town panchayats (local self-governance bodies). For a state that has taken decentralisation of the democratic process to the Panchayati Raj institutions seriously, the present focus is on strengthening the ability of the elected representatives to lead the process of adapting to and mitigating climate change.

The first task for the Institute for Climate Change Studies (ICCS), established by the government of Kerala in 2014 in Kottayam to advise the state on adaptation and mitigation, was to start training of elected representatives on what climate change would mean on the ground and how they can strengthen the institutions to deal with it. “In the recent months, we had been conducting trainings for the MLAs (members of legislative assembly), mayors and municipal corporation chairmen on how to deal with climate change,” George Chackacherry, director of ICCS, told indiaclimatedialogue.net. The ICCS is establishing a State Climate Change Knowledge Cell as a data repository related to the state.

The Kerala Institute of Local Administration (KILA) at Mulamkunnathukavu near Thrissur has been training multiple levels of elected representatives on issues related to climate change. Recently, in an effort to spread the message of the state’s experiment to turn Meenangadi village council into a carbon-neutral village, KILA organised workshops to enthuse leaders of other panchayats in Palakkad, Malappuram, Kozhikode and Wayanad districts to opt for similar change.

“We had been organising trainings for elected representatives on components related to climate change in the past few years,” Joy Elamon, director of KILA, told indiaclimatedialogue.net. “The one day workshops we held recently to expose other panchayat representatives on the concept of carbon neutrality was an extension of these trainings.”

In October, KILA along with the Kerala government’s Directorate of Environment and Climate Change (DoECC) and the Kerala State Biodiversity Board (KSBB), is launching a capacity development programme for panchayat representatives from the four hotspot districts — Alappuzha, Idukki, Palakkad and Wayanad. While Idukki and Wayanad are hill districts that are prone to climate impacts as a consequence of land use change and biodiversity loss, Alappuzha with its network of estuaries faces issues related to sea level rise, salinization and erosion. Located within a gap in the Western Ghats, Palakkad district is prone to heat waves, which though in temperature terms do not compare to similar events in north India have a high impact due to its combination with ambient humidity.

“Variability is the biggest issue in climate change that the elected representatives at the panchayat level have to face,” said Elamon. “The established seasonality that Keralites were accustomed to is changing, and there is increasing variability in the rainfall, heat and humidity. Our training will help strengthen the capacity of these elected representatives to deal with adaptation and mitigation at their level.”

The Western Ghats covered with clouds during the southwest monsoon of 2017 (Photo by S. Gopikrishna Warrier)

The capacity development is designed in a way that after a short orientation the panchayat teams will return to their villages and assess their specific situation. They can then return with a long-term, action-oriented plan for their panchayats.

“We are hoping that the panchayats from Palakkad district will suggest heat action plans, those from Alappuzha would suggest coastal action plans, and those from the Idukki and Wayanad will have biodiversity conservation plans and action plans for carbon neutral villages,” said Elamon. “In addition to the elected representatives, panchayat officials and school teachers, we are also including at least three educated, young men and women from each panchayat so that the younger generation has a buy-in into the process.”

“This will be an innovative training in action,” said Nirmala Sanu George, Kerala team leader of the Climate Change Innovation Programme (CCIP), who has been working closely with the DoECC for the implementation of climate change related projects in the state. “Perhaps it has to do with the drought, but there has been a greater awareness in Kerala about climate change in the past two years. There are more questions in the state assembly, and the panchayat elected representatives are enthusiastic to carry out adaptation and mitigation activities in their areas,” she told indiaclimatedialogue.net.

It is this enthusiasm that brought elected representatives for the KILA training to understand the concept of carbon-neutral panchayats. “With carbon dioxide emissions increasing in our panchayat, we want to reduce it at least to the level that we are carbon-neutral,” said N. Mohammed Koya Master, president of the Thrikkalangode Panchayat in Malappuram district.

“Our wells have been drying in the recent years and there have been much illnesses,” he told indiaclimatedialogue.net. “So our goal in making our panchayat carbon-neutral is to have good water, good food and good air. In addition to well recharge we have been working to reduce plastics, have an effective garbage disposal programme and plant trees.”

These panchayats draw their inspiration from Meenangadi panchayat in Wayanad district, which had started on a process to turn carbon-neutral on the World Environment Day of 2016. Thomas Isaac, finance minister of Kerala, launched the programme with support from NGOs such as Thanal and the Community Agrobiodiversity Centre of the M.S. Swaminathan Research Foundation (MSSRF-CABC).

“We felt the need to change our way when we started to see adverse environmental impacts in our Wayanad district,” said Beena Vijayan, president of Meenangadi panchayat. “Paddy fields in our hill district are being replaced by banana plantations, and we have been facing drinking water problems.”

Meenangadi proposes to become carbon neutral by 2020. For this their action plan includes tree planting, conserving energy, conserving water, turning organic waste into manure and develop a green protocol for all activities in the panchayat.

Vijayan is excited to share their experience with other panchayats. “If each of the 941 gram panchayats can become carbon neutral in their own way, there is much we can do together,” she told indiaclimatedialogue.net.

After the drought of 2016-17 there is movement from the state government, research and training institutions, NGOs and panchayat bodies to at least start working on ways to reduce their carbon footprint. This could be the only positive fallout from the unprecedented drought that the state experienced.

By Shi Yi
China’s first five-year plan since its 2060 carbon neutrality pledge last year fails to set an emissions ceiling, but draws back from economic growth at any cost
END_OF_DOCUMENT_TOKEN_TO_BE_REPLACED

By Moonis Ijlal, Shreeshan V.
New rules announced by the power ministry on selling surplus electricity from rooftop solar installations could hold back expansion of the sector that has seen slow growth
END_OF_DOCUMENT_TOKEN_TO_BE_REPLACED

By Joydeep Gupta
Climate change made the Uttarakhand flash flood in the Indian Himalayas possible, and poor development policies on building dams and roads made it disastrous
END_OF_DOCUMENT_TOKEN_TO_BE_REPLACED

By Soumya Sarkar
The United Nations has warned that immediate action is needed to face the triple environmental emergency of climate change, biodiversity loss and pollution
END_OF_DOCUMENT_TOKEN_TO_BE_REPLACED

By Jai Kumar Gaurav, Akshar Bhatt, Kundan Burnwal
A long-term low-carbon economic strategy can help a country to reduce policy uncertainty, which would help investment decisions by both the public and private sectors
END_OF_DOCUMENT_TOKEN_TO_BE_REPLACED

By Navroz K Dubash
While an Indian net-zero announcement may add to the international momentum, it also risks being a hollow pandering to global pressures at best
END_OF_DOCUMENT_TOKEN_TO_BE_REPLACED

By Omair Ahmad
Norwegian ambassador Hans Jacob Frydenlund speaks in an interview about deepening science cooperation, the impact of the pandemic and India’s Arctic policy
END_OF_DOCUMENT_TOKEN_TO_BE_REPLACED
Share This