A tanker being filled with groundwater in Kalanji, a village 30km north of Chennai city centre (Photo by Sibi Arasu)

About 30 km north of Chennai’s centre is the sand dune-laden coastal village of Kalanji. It’s located just beyond the industrial hub of Ennore, which hosts three thermal power plants, two ports and a coal yard, among other heavy industry. Kalanji and its neighbouring village of Kattupalli are among the last remaining traditional villages in this region. They are also the sites of excessive groundwater extraction, which provides for many of the heavy industries and the drinking water needs of the ever-expanding city and its suburbs.

On the other side of the city, 30 km south of the centre, is the erstwhile village and now peri-urban area of Perumbakkam. Regardless of the location, the story is similar. Perumbakkam and its adjoining neighbourhoods were a water-rich region with numerous lakes, ponds, wells and other water bodies. They are now a primary source of groundwater for Chennai’s expansive Information Technology (IT) corridor. About 200 water tankers, each with a capacity of 12,000 to 15,000 litres, ply from here to the nearby IT corridor every day, providing water to multi-storeyed apartment complexes and glass-walled offices.

The water tankers are an easy fix for industrial, residential and service-sector consumers, especially when there’s no infrastructure for water supply set up by the city authorities. For the thousands of inhabitants of these villages, the water tankers and the bore wells that feed them spell death for their traditional life and livelihoods.

“Nobody farms here anymore. That was all in the past. People now do anything to survive, even become criminals,” a teashop owner in Kattupalli told indiaclimatedialogue.net. “The water tankers also drive all day and night at high speeds, resulting in accidents and even deaths of many of our people.” The villagers of Perumbakkam echo similar sentiments.

Chennai is blessed with an aquifer system that runs a few kilometres from the coastline along the entire coastal stretch of the metropolitan area as well as the Kancheepuram and Thiruvallur districts on either side of the city. An aquifer is an underground layer of rock saturated with water through which water can be extracted. A healthy aquifer is key for a good groundwater level and is recharged by the various wells, tanks, ponds as well as the wetlands that lie in and around Chennai.

Increasing encroachments on all of these water bodies, combined with over-extraction of groundwater as well as extreme weather, has led to the crippling of the city’s coastal aquifer system. For example, the Pallikaranai marsh, a sprawling wetland to the south of the city, is only a fraction of the size that it was a century back.

There are very few agricultural fields remaining in Perumbakkam in the southern reaches of Chennai, with high-rise apartment complexes dotting the skyline (Photo by Sibi Arasu)

In the book, Reconsidering the Impact of Climate Change on Global Water Supply, Use, and Management, researchers from the Chennai-based non-profit Care Earth Trust state that the size of the Pallikaranai marsh has reduced from 6,000 hectare (ha) in the 1900s to the present 593 ha. Earlier this year, a study by the Central Groundwater Board (CGWB) confirmed that the city’s groundwater resources are being overexploited. It stated that the water below the surface is being extracted at a rate of 185%.

“Starting from Minjur in the city’s north to Uthandi in its extreme south, large stretches of the coastal freshwater aquifers have become completely saline,” S. Janakarajan of the Madras Institute of Development Studies (MIDS) told indiaclimatedialogue.net. Janakarajan has been studying water and environment related issues in Chennai as well as other parts of southern India for two decades.

“Also, it is clear that Chennai is susceptible to extreme weather events. You have a state climate change cell but they are doing absolutely nothing. There’s no climate change adaptation strategy. The Greater Chennai region has more than 3,600 water bodies but despite the tremendous rains of 2015, many were dry the next year,” Janakarajan said. “If only they had stored water and conserved these water bodies, the water table would have gone up, but they have not done it.”

It is estimated that the present water requirement for the Greater Chennai region is about 1,400 million litres per day (mld) and the city’s Metro Water board expects this demand to rise to nearly 1,800 mld in four years. The city is highly dependent on its surrounding reservoirs to be periodically replenished since there are no perennial sources of water around Chennai. As of now, the primary sources for water to the city are reservoirs such as the Veeranam reservoir, located about 200 km from the city; water from the Krishna River in Andhra Pradesh about 400 km away; as well as two desalination plants built over the last few years.

“Even during the best of times we can supply about 830 mld of water. During a drought year, we can manage only about 450 mld,” a senior state government official told indiaclimatedialogue.net. “So the rest comes from groundwater sources only. Even though there are laws and government orders that are supposed to prevent extraction of groundwater, these have never been implemented for the simple reason that the city is always water-stressed.” 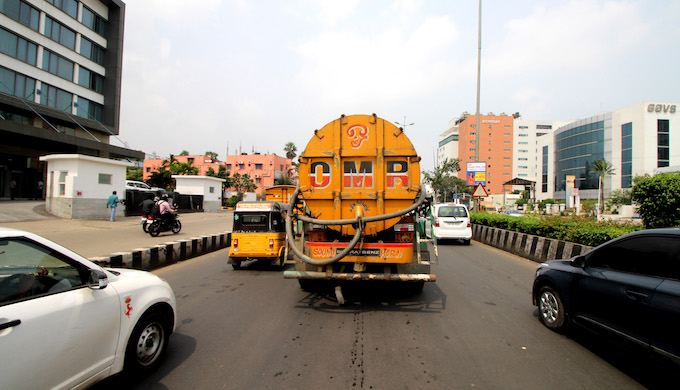 A water tanker on the Old Mahabalipuram Road, Chennai’s IT corridor. The water mafia makes a killing by buying groundwater at INR 200 per tanker and selling at INR 1,000- 1,200 (Photo by Amirtharaj Stephen)

Water tanker owners and private landowners in peri-urban regions exploit this water stress, holding the city to ransom. A strike by water tankers in March 2017, which was a reaction to seizures of two trucks by the revenue department for illegally extracting water, resulted in the entire IT corridor being nearly shut down.

While the strike was called off on the third day after the government conceded their demands, the Federation of Indian Chambers of Commerce and Industry (FICCI) estimated that another day of strike would have led to a cumulative loss of business of up to USD 16 million on the IT corridor. The state official said, “You can control a group only when you’re in a position to control. If we can provide the water, we can take them on. As of now, that is not possible.”

In a report titled The Peri-urban to Urban Groundwater Transfer and its Societal Implications in Chennai, S. Packialakshmi and N.K. Ambujam of the Department of Civil Engineering, Sathyabama University, state, “Conservation and recharge measures should be adopted immediately in the hard rock areas, by constructing open shafts or open wells in and around the water bodies (till it reaches the fractured zone to inject the storm water effectively in monsoon times), by the construction of percolation ponds, adopting rainwater harvesting structures at the household level, protection of water bodies, etc.”

“While there are many laws which can be used to regulate over-extraction, in the many years I have been studying the groundwater scenario in Chennai, I have never seen them implemented,” Packialakshmi told indiaclimatedialogue.net.

The Chennai Metropolitan Area Ground Water (Regulation) Act, 1987, and the Tamil Nadu Groundwater (Development and Management) Act, 2003, for the state of Tamil Nadu provide directions to regulate, control and conserve groundwater. Apart from this, there is a government order passed by the state public works department in 2010 that restricts extraction of groundwater within a distance of 10 km from the coastline. Unfortunately, all these measures have remained only on paper. In reality, water extraction continues unabated and only increases manifold when demand increases due to climate change-related scenarios.

“There’s no acknowledgement that there is even a problem. Acknowledgement doesn’t mean to have a law, it means to start acting on the law,” city-based environmental activist Nityanand Jayaraman told indiaclimatedialogue.net. “They are just turning a blind eye to this situation. The groundwater situation here is an environmental disaster that is already in motion. It is only a matter of time before there is extensive salinity in all of our groundwater. It will be very difficult to return to anywhere close to normal if this happens.”

Could the Himalayas harbour the next pandemic?

By Soumya Sarkar
Although top global banks are bankrolling biodiversity loss and ecosystem destruction at an unprecedented scale, the finance sector has largely evaded scrutiny till now
END_OF_DOCUMENT_TOKEN_TO_BE_REPLACED

By Joydeep Gupta
Extreme weather events have risen dramatically due to climate change, the United Nations said, urging action on early warning systems to minimise losses and save lives
END_OF_DOCUMENT_TOKEN_TO_BE_REPLACED

By Beth Walker, Soumya Sarkar, Zofeen Ebrahim, Ramesh Bhushal
Health experts call on governments in South Asia to clean up their act as high levels of air pollution could worsen the severity and spread of the coronavirus pandemic
END_OF_DOCUMENT_TOKEN_TO_BE_REPLACED

By Soumya Sarkar
Large-scale use of pesticides to kill locust swarms in India, which saw the worst outbreak in three decades this year, is hazardous to human health and can harm local ecosystems
END_OF_DOCUMENT_TOKEN_TO_BE_REPLACED

By Steve Cole, Erin Guiltenane
In the largest-ever study of glacial lakes, researchers have found that the volume of water in these lakes worldwide has increased by about 50% since 1990
END_OF_DOCUMENT_TOKEN_TO_BE_REPLACED
Share This