Frugal technology helps in climate cause 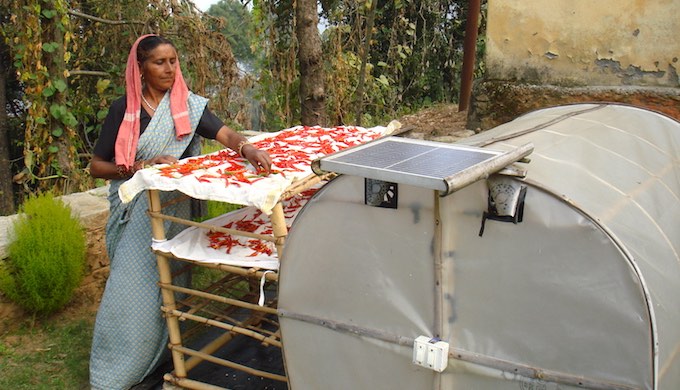 She removes the dome-shaped cover and shows the hot chillies that are now dried to perfection with a satisfied smile. Bimla Devi is a proud owner of a solar dryer.

Resident of Jaghdhar village in the mountainous Tehri Garhwal district of Uttarakhand, Bimla Devi is the only woman who has this solar gadget in all the five villages near Chamba — Ranichauri, Savli, Moan, Guriyali and Jaghdhar — where Women Action For Development (WAFD), a non-profit, is working to transform women into climate leaders and make them an intrinsic part of climate mitigation policies.

The solar dryer is a frugal technology that allows for edibles to dry faster using natural heat as opposed to drying out in the open. Plus, it is fitted with a small fan powered by a small solar panel that helps in expelling the excess heat to avoid burning. Made of bamboo and plastic sheet, it has helped Bimla Devi to dry turmeric, chillies, lentil dumplings and other farm produce, which she can use round the year and sell the excess as well.

“The best thing is that it doesn’t lead to any discolouration or change of taste. The dryer also protects the edibles from dust and monkeys. I am able to make Rs 10,000 out of it in a year by selling the dried foodstuff and spices and that too without any investment,” she told indiaclimatedialogue.net / TTP. “I also rent out my dryer to other women on per day basis.” She is happy with the technology that is helping her generate some extra income and preserve food round the year for personal use.

Solar dryer is just one of the technologies that WAFD has introduced in collaboration with another non-profit Integrated Sustainable Energy and Ecological Development Association (INSEDA) that is helping in designing low-cost, low carbon and eco-friendly technologies, which can be easily used by women.

Technology for the poor

These technologies are significant since they are low-cost and easy to build with low or almost no guidance. They also aims at promoting the pro-poor concept where the income of the poor in the region who are already living a hard life on the mountains grows in comparison to the whole population, which in turn helps beneficiaries to decrease the uncertainty of financial stability. They also address the challenge of sustainable development in economical backward areas of Asia.

Among these, smokeless cooking stove called Heera Chulha has been a big hit with the women. “Earlier our utensils used to turn black totally because the traditional stove used to release so much smoke. Also the smoke used to get into my eyes and nose and I used to suffer from lot of health issues,” Devi, who also has a Heera Chulha installed in her house, told indiaclimatedialogue.net / TTP.

Anita Bahuguna of Ranichauri village, who also has the same stove in her kitchen, said, “In winters, we can now make do with fewer trips in the sub-zero temperatures to collect firewood. Earlier, we had to collect 10 kg of firewood. Now we can manage with just 5 kg in a day.”

The design of Heera Chulha is such that majority of the smoke goes out and most of the carbon gets filtered through the water bucket kept on the terrace, leaving only a negligible amount of carbon in the air, preventing both indoor and outdoor air pollution. 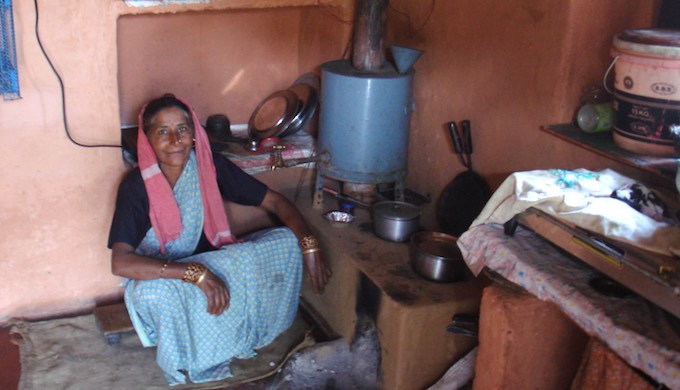 In its upgraded version, it is fitted with a fan for faster cooking, which is powered by a 10-watt rooftop solar panel. The panel also is connected with LED lights and mobile charger points, giving additional benefits to the community. Most importantly, it also has a hot water facility, which keeps the house warm in winters. Due to no indoor pollution, villagers can keep the doors of house shut in winters to keep it warm.

“Now with the light, we can pray in the night too. Plus we all sleep cosily in the warm room,” Mamta Bahuguna of Ranichauri village told indiaclimatedialogue.net / TTP. “The hot water facility also keeps the room warm.”

Each Heera Chulha costs INR 12,000 (USD 186) but the beneficiaries are required to just put in bricks and cement worth INR 1,500 and labour from their end. The NGOs provide the rest. “I am able to save Rs 400 on my electric bill due to the light and charger point,” said Devi.

So far, 15 Heera Chulhas have been installed but WAFD plans to expand it further to 75 chulhas by 2019. The villagers are also being helped in installing biogas plants, which are an environment friendly option, to help trap methane, a greenhouse gas ten times worse than carbon dioxide, and save money at the same time.

“All the dung from cattle goes in that, which keeps our house clean too,” Kidi Devi of Guriyali village, among the first to be supported by the NGO to setup a biogas plant, told indiaclimatedialogue.net / TTP. “It needs 25 kg of cow dung and 25 litres of water to start the process and the residue slurry is used as an organic manure in our kitchen garden, so we are benefitting from that also.”

From biogas plant to smokeless kitchen stoves to dousing forest fires, WAFD is converting mountain communities into climate leaders, one household at a time.

Can India compete with China in solar module production?

By Shally Seth Mohile
Weak consumer appetite, lack of charging infrastructure and a high payback period is holding back adoption of electric cars for personal use in India
END_OF_DOCUMENT_TOKEN_TO_BE_REPLACED

By Soumya Sarkar
In a promising outlook for light mobility, penetration of electric 3-wheelers in India may rise up to 75% by 2030, followed by 2-wheelers at 35%
END_OF_DOCUMENT_TOKEN_TO_BE_REPLACED

By Soumya Sarkar
Renewable power is surging despite the Covid-19 crisis and is on track to become the largest source of electricity by 2025, ending the dominance of coal
END_OF_DOCUMENT_TOKEN_TO_BE_REPLACED

By Anjali Notandas
Concerned about the dangers of climate change and environmental degradation, children in India have taken to activism, demanding their rights to a better future
END_OF_DOCUMENT_TOKEN_TO_BE_REPLACED