The agenda of this year’s global climate summit aims to prepare a roadmap to implement the Paris agreement but that could be stumped by US delegates, indicated by President Donald Trump’s pullout statement 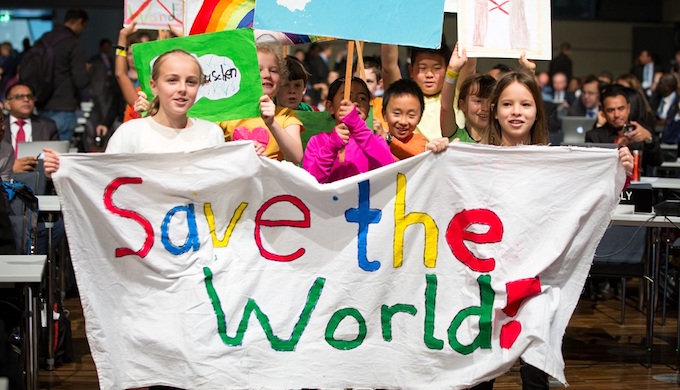 The year 2017 is set to beat all records due to losses from natural disasters. US President Donald Trump has decided to pull his government out of the Paris agreement. These are the two overarching pieces of reality within which the annual UN climate summit opened in the German city of Bonn on November 6.

Bonn, where the secretariat of the UN Framework Convention on Climate Change (UNFCCC) is located, is hosting this year’s summit on behalf of Fiji, the country that will preside over the deliberations. As an almost inevitable consequence, there is sharp focus on natural disasters, which are increasing in frequency and intensity due to climate change, according to the Intergovernmental Panel on Climate Change (IPCC).

Another big consequence – sea level rise – is also in focus due to Fiji being the presidency. If this leads to some concrete action to adapt to sea level rise, that should be good news to people all along the coasts of South Asia, especially in the Sundarbans, where an estimated three million people are endangered by this development.

“2017 is on track to become the year with the highest natural disaster losses ever,” Peter Hoeppe, Chairman of the Munich Climate Insurance Initiative (MCII), said on the opening day. “COP23 (this year’s climate summit) needs to bring the impacts of climate change to the limelight of the international community.” Insurance companies are facing record payouts.

The World Meteorological Organisation (WMO) says it is likely that 2017 will be one of the three hottest years on record, with long-term indicators of climate change such as increasing carbon dioxide concentrations, sea level rise and ocean acidification continuing unabated. Arctic sea ice coverage remains below average and previously stable Antarctic sea ice extent was at or near a record low.

WMO’s provisional statement on the State of the Climate says the average global temperature from January to September 2017 was approximately 1.1 degrees Celsius above the pre-industrial era. “The past three years have all been in the top three years in terms of temperature records. This is part of a long-term warming trend,” said WMO Secretary-General Petteri Taalas. “We have witnessed extraordinary weather, including temperatures topping 50 degrees Celsius in Asia, record-breaking hurricanes in rapid succession in the Caribbean and Atlantic reaching as far as Ireland, devastating monsoon flooding affecting many millions of people and a relentless drought in East Africa.”

“Many of these events – and detailed scientific studies will determine exactly how many – bear the tell-tale sign of climate change caused by increased greenhouse gas concentrations from human activities,” Taalas added.

Patricia Espinosa, Executive Secretary of UNFCCC, said, “These findings underline the rising risks to people, economies and the very fabric of life on earth if we fail to get on track with the aims and ambitions of the Paris Agreement.”

According to the World Health Organisation (WHO), the overall risk of heat-related illness or death has climbed steadily since 1980, with around 30% of the world’s population now living in climatic conditions that deliver prolonged extreme heatwaves. Between 2000 and 2016, the number of vulnerable people exposed to heatwave events has increased by approximately 125 million.

In 2016, 23.5 million people were displaced during weather-related disasters, most of them due to floods or storms in the Asia-Pacific region.

Despite this situation, and while global attention remains riveted on the US pullout announcement, an Indian think tank says all developed and many large developing countries are failing to make commitments that will keep global average temperature rise within two degrees Celsius, a key goal of the Paris agreement. See: Climate pledges not enough to deal with emissions

The Council on Energy, Environment and Water (CEEW) has analysed the Paris agreement commitments of all countries – data that was made public by the Climate Action Tracker – and concluded that only five developing countries had made commitments compatible with the two-degree ceiling – Costa Rica, Ethiopia, Gambia, India and the Philippines.

Echoing this, Harsh Vardhan, India’s Minister for Environment, Forests and Climate Change (MOEFCC), said at the opening of the India pavilion at the summit that the country had already installed 58.3 GW of renewable energy out of the 175 GW planned by 2022.

In this situation, the main agenda of this year’s climate summit is to prepare a roadmap to implement the Paris agreement in such a way that average global temperature rise can stay within two degrees Celsius. Many observers fear this roadmap will be disrupted by US delegates, which remains to be seen.

The poor countries continue to plead for more action and more money. Gebru Jember Endalew, Chair of the Least Developed Countries (LDC) Group, said on the opening day, “COP23 is an important opportunity to bridge the widening finance gap, a serious barrier to ambitious climate action worldwide… LDCs and other developing countries cannot take ambitious action to address climate change or protect themselves against its impacts unless all countries fulfil and outdo the pledges they have made.”

New Delhi-based think tank Centre for Science and Environment (CSE) said the US withdrawal should be seen as an opportunity for action, and not inaction. “Over the past 25 years, the US has been an obstruction to an ambitious climate deal. Today, we are in a state of climate crises, with the world reeling from a series of climate change-induced extreme weather events. The US withdrawal should be taken as an opportunity and a call for greater and more ambitious action, and not a call for inaction,” said Chandra Bhushan, deputy director general of CSE and the head of its climate change programme.

By India Climate Dialogue
Six experts outline what Britain needs to do as it hosts the UN climate summit in 2020, a crucial year
END_OF_DOCUMENT_TOKEN_TO_BE_REPLACED

By Joydeep Gupta
It’ll take a global system change if this wish of former UK energy minister Claire O’Neill, who will head the next United Nations climate summit in Glasgow, were to come true
END_OF_DOCUMENT_TOKEN_TO_BE_REPLACED

By Joydeep Gupta
The annual summit failed to make headway as there was a breakdown in discussions over finance, carbon markets or how to deal with loss and damage caused by climate change
END_OF_DOCUMENT_TOKEN_TO_BE_REPLACED

By Soumya Sarkar, Joydeep Gupta
Lives of more than 1.4 billion people living in mountains, coasts and islands are in jeopardy due to an accelerated rise in sea levels and faster melting of the planet’s ice cover
END_OF_DOCUMENT_TOKEN_TO_BE_REPLACED

By Joydeep Gupta
The annual summit failed to make headway as there was a breakdown in discussions over finance, carbon markets or how to deal with loss and damage caused by climate change
END_OF_DOCUMENT_TOKEN_TO_BE_REPLACED

By Joydeep Gupta
Even six years after the Warsaw International Mechanism for Loss and Damage was established, there is little hope for getting funding for climate disasters
END_OF_DOCUMENT_TOKEN_TO_BE_REPLACED

By Joydeep Gupta, Soumya Sarkar
The Paris climate pact will come into effect on January 1, but probably without an agreement on starting a new market to trade greenhouse gas emissions
END_OF_DOCUMENT_TOKEN_TO_BE_REPLACED
Share This