In the opening session of Bonn climate summit India, supported by China, took strong umbrage that pre-2020 agenda items were being ignored, most of which are the responsibility of developed countries 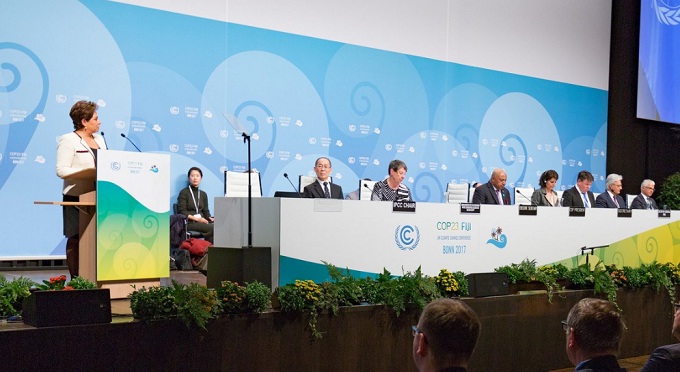 The opening sessions of the annual UN climate summit left the delegations of India and China angry. Both wanted to add to the agenda the issue of immediate action to combat climate change, but Fiji – the presidency of this November 6-17 summit in the German city of Bonn – did not agree, saying there was no consensus on adding pre-2020 action to the agenda.

The 2015 Paris climate agreement comes into effect in 2020. Pre-2020 action is largely the responsibility of developed countries. Delegates from India and China felt the rich nations had influenced Fiji’s decision, a feeling strengthened when a delegate from Switzerland said at the opening plenary that it was unnecessary to add pre-2020 action to the agenda.

On further insistence by India and China, including public remarks at the opening plenary by their delegates, the presidency said it would hold further consultations and take a decision on the matter on November 11, by which time half the summit will be over.

The proposal to include the pre-2020 action had been submitted on behalf of the Like Minded Developing Countries (LMDC) group, in which both China and India are members. Climate negotiations are often conducted in blocs of countries, and many countries are members of more than one bloc.

Frank Bainimarama, Fiji’s Prime Minister and president of the summit, said that he had carried out “intensive consultations” with parties (countries) over the proposed agenda items and had concluded from these consultations that while there was no consensus to include these items in the COP23 (23rd Conference of Parties) agenda, there was a willingness among parties to exchange views and to explore ways forward. He said the additional agenda items were “unique and deserve focused attention” and asked the outgoing president of the summit – Salaheddine Mezouar from Morocco – to do so.

In response, India said that the issue of pre-2020 actions was an ongoing agenda item and was very much part of a process that was mandated with arriving at a global agreement in 2015 (referring to the Paris Agreement) as well as to enhance mitigation action before 2020.

“While we have seen rapid progress on the post 2020 agenda, we have not seen similar progress on the pre-2020 agenda. Any delayed action is going to cost us more. In the light of scientific evidence, there is no rationale for not taking up this item. This has been one of the key issues of trust and confidence among developing countries because any gap in the pre-2020 action will lead to further problems in the future. It will lead to a distribution of the mitigation gap on all developing countries,” said India’s delegate Ravi Shankar Prasad, the Indian minister for Law & Justice, as well as Information Technology.

“If we don’t follow the decisions we taken in the previous COPs, what confidence do we have that the decisions taken in this COP would be honoured? What kind of confidence are we inspiring? What kind of trust are we generating in the process itself?” he asked, pointing to the irony that while the Paris Agreement had come into force (in 2016), the second commitment period of the Kyoto Protocol had still not entered into force. Most rich nations have not ratified this in their legislatures. The Kyoto Protocol obliges developed countries to reduce their greenhouse gas emissions.

Responding to India, the delegate of Switzerland agreed that pre-2020 action was an “important item”, but this was being discussed under several other agenda items.

That brought the delegate of China to his feet. He said some countries might say that different agenda items are already looking at pre-2020 issues, but the “issues are not being addressed there”.

“Even if it appeared that there are items to address the issues, they do not address them in the manner in which they should be considered. There remain gaps. In any case, if some Parties insist that they are being addressed, it would be good to take stock of the progress and have a complete overview of all matters, and that is exactly what the LMDC is proposing.”

“If we do not respect our previous decisions, how do we maintain the trust among Parties and how do we show the world that we are on the right track and how do we prove the effectiveness of the multilateral process?”

The only response from Bainimarama was that a decision had been made and that they would come back to this on Saturday.

India stressed, “Whatever discussions we have been hearing, we have not heard any Party opposing it. However, the Fijian Prime Minister repeated, “I have mentioned that I have had intensive consultations with Parties and there has been no consensus on this issue.”

Asked to comment on this development, Li Shuo, Senior Climate and Energy Policy Officer of Greenpeace East Asia, told indiaclimatedialogue.net, “Everybody agrees on the need to accelerate near term ambition. We hope we shall see some positive developments on this by Saturday.”

By India Climate Dialogue
Six experts outline what Britain needs to do as it hosts the UN climate summit in 2020, a crucial year
END_OF_DOCUMENT_TOKEN_TO_BE_REPLACED

By Joydeep Gupta
It’ll take a global system change if this wish of former UK energy minister Claire O’Neill, who will head the next United Nations climate summit in Glasgow, were to come true
END_OF_DOCUMENT_TOKEN_TO_BE_REPLACED

By Joydeep Gupta
The annual summit failed to make headway as there was a breakdown in discussions over finance, carbon markets or how to deal with loss and damage caused by climate change
END_OF_DOCUMENT_TOKEN_TO_BE_REPLACED

By Soumya Sarkar, Joydeep Gupta
Lives of more than 1.4 billion people living in mountains, coasts and islands are in jeopardy due to an accelerated rise in sea levels and faster melting of the planet’s ice cover
END_OF_DOCUMENT_TOKEN_TO_BE_REPLACED

By Joydeep Gupta
The annual summit failed to make headway as there was a breakdown in discussions over finance, carbon markets or how to deal with loss and damage caused by climate change
END_OF_DOCUMENT_TOKEN_TO_BE_REPLACED

By Joydeep Gupta
Even six years after the Warsaw International Mechanism for Loss and Damage was established, there is little hope for getting funding for climate disasters
END_OF_DOCUMENT_TOKEN_TO_BE_REPLACED

By Joydeep Gupta, Soumya Sarkar
The Paris climate pact will come into effect on January 1, but probably without an agreement on starting a new market to trade greenhouse gas emissions
END_OF_DOCUMENT_TOKEN_TO_BE_REPLACED
Share This