Many of the ports on India’s long coastline such as Mumbai, Kakinada and Mangalore are likely to see large parts of their areas go under water in the next 100 years due to the inexorable rise in sea levels 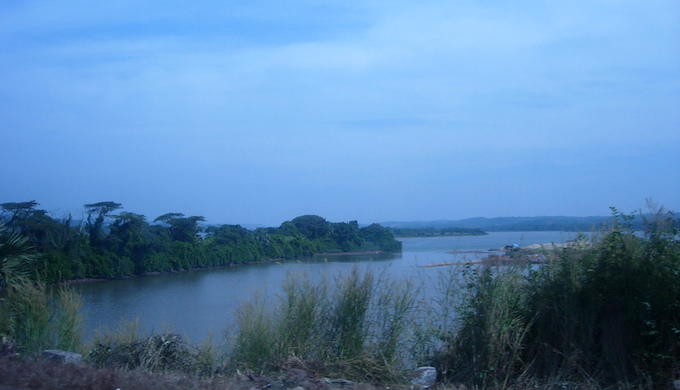 Mangalore port on India’s west coast is most vulnerable to rising sea levels, followed by Mumbai in Maharashtra and Kakinada in Andhra Pradesh (Photo by Deepak Sharma)

A century from now, Mangalore city in coastal Karnataka will have the port most affected in India by the rise in sea levels caused by global warming, according to a recent study by NASA of 293 of the world’s leading port cities.

Melting polar ice caps will cause the sea level in Mangalore, officially known as Mangaluru, to rise by 14.60 cm by then, while Mumbai, one of the world’s most populous mega cities with more than 10 million inhabitants, will witness its sea rising by 13.95 cm. Kakinada in Andhra Pradesh, the only other Indian city studied, will register a 13.87 cm rise.

“There is a general consensus among earth scientists that melting of land ice greatly contributes to sea-level rise (SLR) and that future warming will exacerbate the risks posed to human civilisation,” says the study led by Eric Larour.

It points out that as land ice is lost to the oceans, the earth’s gravitational and rotational movements are disturbed, resulting in strong spatial patterns in SLR, which are termed “sea-level fingerprints”. “These (ice sheets) are huge masses that exert an attraction on the ocean,” Larour said. “When the ice shrinks, that attraction diminishes — and the sea will move away from that mass.”

As well as this “push-pull influence” of ice, the ground under a melting ice sheet expands vertically, having previously been compressed by the sheer weight of ice. “You can think of the earth as a spinning top,” he said, referring to the rotation of the planet. “As it spins, it wobbles and as masses on its surface change, that wobble also changes. That, in turn, redistributes water around the earth.”

Scientists cannot forecast future ice changes, which diminishes their ability to use these fingerprints to accurately predict local sea-level (LSL) changes. Hence, they use mathematical constructs to determine the exact gradient of sea-level fingerprints with respect to local variations in the ice thickness of all the world’s ice drainage systems.

By mapping these fingerprint gradients, they have come up with a new diagnosis tool, referred to as gradient fingerprint mapping (GFM), that readily allows for improved assessments of future coastal inundation or emergence. Surendra Adhikari of NASA, one of the authors of the study, explained how to navigate the NASA tool, available at https://vesl.jpl.nasa.gov/research/sea-level/slr-gfm/.

“This is the ice-only contribution to local sea-level. There are other factors (ocean warming, ocean circulation, local subsidence/uplift, erosion, etc.) to consider to get the final numbers for local sea-level,” Adhikari clarified to indiaclimatedialogue.net. “Based on modern measurements of global sea level, it can be broadly stated that ice effects and other (mainly ocean) effects of total sea level are about 50% each. Larour used the same logic to also provide total ice plus ocean sea-level estimates. For Mumbai, for example, that would be 2.875 mm per year. Since 1.395 mm per year is based on past 14 years of data (2002-2016), one should be careful while extrapolating this to the future. The same is true for ice plus ocean of the signal (where ocean signal is estimated based on recent measurements from satellite altimetry etc.).”

“We were very clear that this was the contribution from the ice only. We indeed gave very conservative projections based on extrapolation of current GRACE observed trends,” Larour told indiaclimatedialogue.net. “Most cryosphere scientists out there are looking more at 1 m per year by 2100, which would be about three times the numbers I’m giving you.”

Adam Sobel from Columbia University in New York also sounded a note of caution. “My first reaction is that the SLR numbers for 2100 look far on the low side for current projections,” he told indiaclimatedialogue.net. “An article on the NASA study in the Hindustan Times makes a point about the difference between Mangaluru and Mumbai but that difference is less than 1 cm, (which is pretty insignificant.”

“More remarkable seems to me that they project only about 15 cm rise (from ice) by 2100. Most projections now consider 1 metre or more quite possible by 2100 (and almost certainly later, the fact that we focus on 2100 is very misleading for SLR which takes a long time to play out).”

“As far as I can judge, the method is fine,” Anders Levermann of the Potsdam Institute for Climate Impact Research and Columbia University told indiaclimatedialogue.net. “Both ice sheets on Greenland and Antarctica are losing ice and contribute to global SLR. The ice loss from Greenland increases sea level the most the further a place is away. The same holds for Antarctica.”

“Thus the equatorial cities are the most effected by both ice sheets. If administrations and governments take the problem seriously, no one has to be afraid of SLR, but the more greenhouse gases we emit into the atmosphere it will be very expensive. SLR is a force of nature that we unleashed and which is growing slowly but surely with every degree of warming.”

“The magnitude of sea-level rise by 2100 can vary depending upon the model used,” Benjamin Horton of the Earth Observatory of Singapore and Rutgers University told indiaclimatedialogue.net. “For example, the upper estimate of the Intergovernmental Panel on Climate Change 5th Assessment Report from global mean sea level is 98 cm. In contrast, a recent paper has suggested that the Antarctica ice sheet can contribute over 1 m to global mean sea level in a high emission scenario.”

“In my opinion the importance of this paper is the spatial variability of sea-level rise. It shows the differential risk cities are facing from flooding from different sources.”

Mumbai may go under water

According to an unpublished paper co-authored last year by R. Mani Murali, a scientist from the National Institute of Oceanography (NIO), previous research has estimated a 3mm per year rise in ocean levels at Mumbai, which would amount to 3 metres by 2100, flooding 40% of the city proper, which has an area of 460 sq. km.

The NIO studied the city’s west coast from Colaba in the south to Mira Bhayander in the north and along the Thane creek on the eastern coast of the city. Mumbai has an average elevation above sea level of 14 metres with some coastal areas as low as 6-8 metres.

“After seeing the visualisation tools and the values calculated by NASA, I would like to convey that NASA estimates are only due to sea level rise,” Murali told indiaclimatedialogue.net. “My study (1 m) was considering storm surges in addition to SLR effects, as it was a study for finding overall vulnerability. It includes the low-lying surface factors, which IIT Kanpur has estimated can raise SLR during a storm surge by as much as 1.5 m. While ocean level rise is a slow and steady phenomenon, a surge is sudden.”

In 2012, India’s second national communication to the UN Framework Convention on Climate Change cited that the most vulnerable stretches along the western Indian coast were Mumbai, Khambat and Kutch in Gujarat, stretches of the Konkan coast and south Kerala. Multi-disciplinary teams and other stakeholders comprising more than 220 scientists belonging to over 120 institutions prepared the communication. It used digital elevation model data, digital image processing and GIS software.

In an article titled We’re not even close to being prepared for the rising waters last month, Bill McKibben, founder of the global climate movement 350.org, referred ominously to the Biblical flood, which destroyed everything in its wake. He specifically referred to the lack of preparedness in low-lying Miami, which was hit by Hurricane Irma and how engineers were trying to raise streets and buildings in a King Canute-like futile gesture to keep the ocean at bay.

Mumbai has a nexus with Miami because it has the world’s second-largest collection of art deco buildings after the US city, many of them also along the sea.

In his recent book, The Water Will Come: Rising Seas, Sinking Cities, and the Remaking of the Civilised World, Jeff Goodell cites his visits to Miami, New York, Venice and Lagos, among other coastal cities. A reviewer in the New York Times newspaper states: “Miami seems least equipped to handle a rise in sea level, founded as it is on pleasure, real estate and the inalienable right not to pay income taxes.”

Salinity has already destroyed the rice crops of the Mekong delta and Bangladesh, notes the author. “If the sea rises high enough, whole island nations could be washed away,” writes the reviewer. “The slum dwellers of Lagos, Jakarta and other coastal cities in the developing world could be chased from their homes, many of which are already on stilts. The International Organisation for Migration estimates there will be 200 million climate refugees by 2050.”

When Amitav Ghosh launched his non-fiction book The Great Derangement: Climate Change and the Unthinkable at the Nehru Centre in Mumbai last year, he referred to how the location was only a stone’s throw from the sea. Mumbaikars, with some of the most expensive real estate in the world, particularly along the coast, were supremely unaware of the rising tide that could destroy everything in its wake in the decades to come.

By Soumya Sarkar
From players struggling in extreme heat to droughts and floods affecting cricket pitches, the game of glorious uncertainty now needs to adapt to climate change
END_OF_DOCUMENT_TOKEN_TO_BE_REPLACED

By Soumya Sarkar
Climate change, land degradation and deforestation are combining to jeopardise global food security unless radical changes are made, warn scientists from around the world
END_OF_DOCUMENT_TOKEN_TO_BE_REPLACED

By Soumya Sarkar
Water levels at India’s ports are rising much faster than elsewhere in the world, a marker of danger for the country’s infrastructure, coastal communities and ecosystems
END_OF_DOCUMENT_TOKEN_TO_BE_REPLACED

By Joydeep Gupta
Despite the drought gripping this region of India, one village in Marathwada in Maharashtra has flourished by growing grapes using innovative water saving methods
END_OF_DOCUMENT_TOKEN_TO_BE_REPLACED

By Hiren Kumar Bose
As climate change gathers pace, insects are proliferating across the world, which scientists say will threaten food production, particularly in bio-diverse countries like India
END_OF_DOCUMENT_TOKEN_TO_BE_REPLACED

By Joydeep Gupta
Cooling gases that are warming the world have to be phased out of India, but the industry is doing little about it in the absence of a long-term policy
END_OF_DOCUMENT_TOKEN_TO_BE_REPLACED

By Cheryl Colopy
Next to the coal-fired power plant of Vedanta's aluminium refinery complex near Jharsuguda in western Odisha, residents stare at ruined farms and poisoned water
END_OF_DOCUMENT_TOKEN_TO_BE_REPLACED

By Soumya Sarkar
Destructive human activity, rising temperatures in the Arabian Sea and ocean acidification is pushing the coral ecosystem in Lakshadweep to the verge of breakdown
END_OF_DOCUMENT_TOKEN_TO_BE_REPLACED