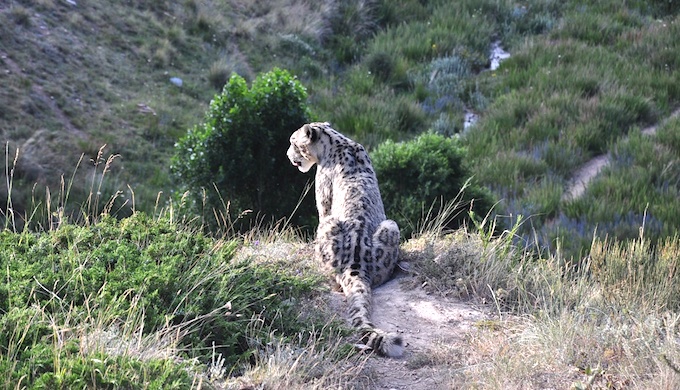 “I love the snow leopard,” says bright-eyed Ganaium, who lives in Tamchy village close to Issyk-kul Lake in Kyrgyzstan. “I haven’t seen it but I know about it from TV and pictures,” said the four-year-old student of Jashmooun school for tiny tots.

A village of 1,400 people, Tamchy lies in Issyk-Kul district nestled in the ridges of Tien Shan mountain range in Kyrgyzstan, which is a habitat for snow leopards. Jashmooun, which means “youngest” in the local language, is one of the local schools where children are sensitised at an early age about snow leopards with the help of Nature and Biodiversity Conservation Union (NABU), a Germany-based organization.

The big cat’s, Ganaium’s favourite, is threatened today by a combination of factors, including the effects of climate change. Global warming could wipe out more than two-thirds of snow leopard habitat in the next 50 years, according to WWF International.

“WWF’s latest Living Planet Report shows if we continue with business as usual, we could witness a two-thirds decline in wildlife from 1970 to 2020. We’re at a crucial time to bend the curve and halt the decline of nature. However, this is not only about the wildlife we love,” says Marco Lambertini, Director General, WWF International. “Safeguarding a future for snow leopards means protecting their vast habitats, on which hundreds of millions of people depend for freshwater and livelihoods.”

The high mountains of Asia are among the most vulnerable in the world to climate change. These ecosystems provide numerous services like water, grasslands for livestock and wildlife, eco-tourism, biodiversity and carbon sequestration. Unfortunately they are already experiencing the effects of climate change through melting glaciers, destabilising of permafrost, increasingly frequent and intense storms and disasters like landslides, floods and droughts.

With the rising temperatures and shift in rainfall patterns, these mountains and their ecological services are undergoing a major shift, making it difficult for the communities and wildlife to cope.

“According to climate change predictions, temperatures are going to get warmer that will push the vegetation uphill beyond the snow line. This would lead to sheep and cows accessing grazing areas higher up in the mountains, right up to snow leopard areas,” Kate Newman, Vice President, Public Sector Initiatives Forests & Freshwater, WWF, told www.indiaclimatedialogue.net. “It will possibly mean additional pressure on the snow leopards as conflicts are likely to increase which would increase retaliatory killing of snow leopards. This is already one of the main threats to their population.”

Increased encroachment by humans is pushing the snow leopard into a corner. (Photo by Snow Leopard Trust)

“Livestock grazing in some parts of Central Asia has increased in duration and shifted to higher elevations due to climate change, increasing interactions between herders and wildlife,” said a working paper addressing climate change threats that was released during the Snow Leopard Summit held recently in Bishkek, the capital of Kyrgyzstan, on August 23-25.

Retaliatory killings of the snow leopards by pastoral communities are already a major threat. “What happens is that if a snow leopard manages to enter a corral, a herder can lose up to 50 animals in one night because these animals are enclosed in one area, so there is a complete panic when a predator enters. So you would have multiple animals killed in one single,” Charudutt Mishra, Science and Conservation Director of the Snow Leopard Trust, who has been guiding research and conservation programmes in snow leopard range countries of Asia, told www.indiaclimatedialogue.net. “Obviously, it would mean retaliations as it would mean losing (the earnings of a) lifetime or half of your livelihood.”

As more and more of such communities are leaving their nomadic ways behind and settling in fixed spots, this has increased the pressures on the grasslands on which the prey species of snow leopards depend. Coupled with infrastructure projects that would cut through many of the snow leopard landscapes, this means that the coming years will push the species even closer to the brink.

China’s Belt and Road Initiative and India’s regional push for infrastructure projects are likely to change the land use and can throw open parts of snow leopard habitats which so far had stayed beyond human reach due to high altitudes.

“Infrastructure, rail lines will impede movement and separate populations of prey species such as ibex and rabbits, making food scarce for snow leopards,” Newman said. “Some of the analysis is showing that these projects are going through some snow leopard corridors.”

“We see an increasing level of natural disasters and things like that. How are we going to be responding to it? Are we still going to build new roads and infrastructure and things like that or are we going to become more climate-smart? Even if we have to do structural development, can we do it in a more climate smart manner?” asks Mishra. “The real challenge is not what climate change will do to these animals but what will we do as consequence?”

However, Newman added that China could play a proactive role in minimising the damages and in better decision-making to ensure safeguarding of ecology.

“China has a very advanced ecological function zoning map method where they used to look for ecosystems, water availability, and vulnerability to dust storms and using that they used to plan where a new city should come up and so on,” Newman said. “There should be partnerships between China and other countries so that they collaborate to develop such maps of natural assets so that better decisions can be made while planning infrastructure projects from ecological perspective.”

During the Snow Leopard Forum, a global initiative that brought together top government officials, scientists and business leaders under the Global Snow Leopard and Ecosystem Protection Programme (GSLEP), climate change emerged as a major concern during the discourse.

“The biggest threat we are facing is of climate change. Snow mountain ecosystem is one such fragile ecosystem that is threatened by climate change. The average rise in temperature in the last decade was 0.5 degrees Celsius globally but now our growth rate has become such that by the end of this century the expected rise in temperature is 4-6 degrees Celsius,” Siddhanta Das, Director General of Forests of India, told the forum. “Unless we make our animals and this system adapt to the climate change, we can’t do much to protect it. Snow leopard conservation will be adversely affected during climate change.”

A technical manual on habitat and prey restoration in slow leopard landscapes done jointly by various wildlife and conservation organizations has calculated country-wise vulnerability of snow leopard population and its habitat to various threats including climate.

According to its findings, the big cat is most threatened in Mongolia, Nepal, Bhutan, Afghanistan, China, India, Pakistan and Tajikistan due to the emerging threat of climate change. The snow leopard populations in Kyrgyzstan and Kazakhstan are among the least vulnerable. It is interesting to note that the most climate-vulnerable ecosystems that lie in India, Mongolia, Nepal and Tajikistan are also threatened from large-scale development projects.

According to studies wildlife researchers under Mishra, it was found that snow leopard landscapes contribute significantly in terms of ecological services as far as livelihoods are concerned. It showed contribution of nature being 2.5 times the actual household income in a site at Pakistan, 3.6 times at a site in India, 38 times when it came to agro-pastoral communities in Mongolia. Thus, saving these snow leopard landscapes becomes crucial from human point of view as well.

There is another threat to snow leopard conservation. Sources have revealed that the International Union for Conservation for Nature (IUCN) is set to bring down the conservation status of the snow leopard from “endangered” to “vulnerable”. While those defending the move have said it is being done because as one of the criteria says that only those species qualify for the endangered category that have less than 2,500 mature individuals and given that the scientifically robust estimation of the snow leopard population is currently unknown, conservationists fear that the move can dilute the importance of saving the snow leopards and might throw open its habitat, which is already facing various threats, further for development projects.

The working paper has also listed various policy recommendations to cope up with climate pressures such as enhancement of data collection, monitoring and scientific research across the range n climate change and its impact on people and wildlife and promotion of integrated approaches to landscape management that addresses climate change risks among others.

While it also urges that the snow leopard conservation across the landscapes must be “climate-smart”, Nepal has already led the march by releasing a climate-smart conservation management plan for its landscape that factors in scenarios of drier winters, wetter summers and ascending tree lines due to climate change.