An innovative approach of gifting trees to reduce greenhouse gas emissions has resulted in the planting of 2.48 million trees, which would absorb 50 million kg of carbon dioxide every year 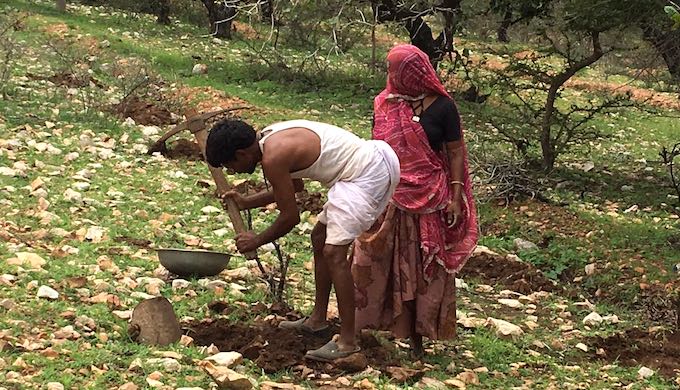 Starting a plantation in Rajasthan (Photo by Grow-Trees)

With the advent of the New Year, a season for gifts for all occasions has begun. An Indian company called Grow-Trees has created waves by offering companies and individuals the possibility of gifting a plantation to offset greenhouse gas emissions, which not only makes for a meaningful gift but also meets a significant environmental objective.

The Mumbai-based company was co-founded by Pradip Shah and his son, Karan. Pradip is the founder of CRISIL, the country’s largest credit rating agency, while Karan is an MBA from Harvard Business School. The duo has involved 350 companies in this initiative and broken even in the past three years.

Grow-Trees claims that it has planted 2.48 million trees — which will absorb nearly 50 million kg of carbon dioxide (CO₂) every year when the saplings mature — and has created 205,000 days of employment. “It is unique in the world because it’s web-enabled,” Pradip Shah told indiaclimatedialogue.net. “We want to make it as user-friendly as possible. When someone here wants to Greet with Trees, he pays for it and the actual tree or trees get planted later. We only plant on public land without tax breaks or other government support. We also audit each plantation every year, sometimes replanting saplings that have died. We have established that the ideal size for nurseries is 20,000 saplings.”

Anybody can gift someone trees on any auspicious occasion or even use the gift as a get-well message or condole the death of someone.

“Tree planting is an important element in the solution to tackle climate change. Trees absorb carbon dioxide and are vital carbon sinks and provide employment in poor villages and degraded forests where jobs are hard to come by,” a Grow-Trees spokesperson said.

According to Zahabia Rajkotwala of Grow-Trees, sponsors bear the cost of planting trees — which is done in the monsoon — as well as tending the saplings. The organisation then asks a third party to conduct an audit to ensure that the saplings survive. Communities, which includes including tribals, take ownership and plant trees in areas near villages. Areas for plantation have been carefully selected, depending on the environmental and social impact, even in the remotest of tribal areas where few venture.

Rajkotwala points out that a large tree inhales 20.3 kg of CO₂ in a year and exhales enough oxygen for a family of four for a year. The amount of sequestration varies according to the species all of which are indigenous varieties, which take around seven years to start absorbing carbon.

For the individual, the initiative enables someone from the comfort of an office or home to plant trees with just a few clicks of a mouse. The advantage is that the recipient gets a personalised e-tree certificate, specifying the number of trees planted. Based on the amount of carbon an average tree absorbs in its lifetime, one can set a tree-planting goal to offset one’s carbon footprint.

Grow-Trees fund all the programmes and bear the cost of raising the nursery. It has found reliable planting partners — usually NGOs or local networks like cooperatives or gram panchayats (village councils). It has achieved 95% survival of the plants. In Sariska in Rajasthan, it has created a buffer between the forest and villagers, thereby enabling tigers and nilgais (blue bulls) to come back to the forest.

Previous attempts to popularise tree-planting as a green movement have failed because of lack of information about an organisation or an NGO actually planting what has been paid for or even ensuring that the trees survive to reach adulthood to absorb CO₂.

Former Environment Minister Jairam Ramesh has spoken about the contribution of Indian forests in soaking the annual CO2 emissions. “We have for the first time quantified the carbon sequestration that is taking place through our forest cover. Our estimators said that about 11% of our annual greenhouse emissions are being absorbed by our forests,” Ramesh has said. “If we improve the quality of our forest cover and reduce the proportion of degraded forest, this 11% could in fact even increase.”

For companies that have a net profit of at least INR 50 million (USD 0.8 million) a year, INR 10 billion turnover or INR 5 billion net worth, associating with Grow-Trees makes a lot of sense. Indian laws stipulate that these companies have to spend 2% of their 3-year average annual net profit on corporate social responsibility (CSR) activities in each financial year, starting from 2015.

Some of the companies have indeed utilised their CSR allocation towards plantations. For instance, DCB Bank adopted two projects with 25,000 trees each — one in the Kolar region of Karnataka to generate rural employment and the other in Sitamata Wildlife Sanctuary in Rajasthan to protect the habitat of the leopard. This will create approximately 4,092 workdays of jobs in nursery and planting activities alone and is expected to offset 1 million kg of CO2 per year once they mature. “We are going to do our bit,” said Murali M. Natrajan, Managing Director and CEO of DCB. “Join hands with us.”

Similarly, Deutsche Post DHL Group has adopted 25,000 trees near Sitamata Wildlife Sanctuary aimed at protecting the endangered Indian Giant Flying Squirrel. By reforesting the buffer zone of the sanctuary, it wants to reduce the pressure of human activity in the core areas by planting 175,000 trees.

In launching this project, Grow-Trees is creating jobs for forest dwellers and women in remote areas in the nurseries and planting and post-planting activity. The 25,000 trees will create approximately 3,000 workdays of jobs.

According to Jyoti Row Kavi of DHL Group, the logistics company is generating value for business and society with its GoGreen Program. It aims to train 80% of its employees to become certified GoGreen specialists, which includes joining partners to plant one million trees every year.

“It is partnering with Grow-Trees, the official partner of the United Nations Environment Programme’s Billion Tree Campaign and WWF’s Cities for Forests campaign. It aims to inculcate the practice amongst companies and individuals worldwide to plant real trees in public lands through the web to greet or honour someone by means of an e-tree certificate or card with a personalized message. The unique certificate number allows one to locate on Google Map the site of the tree-planting project. DHL and Blue Dart have together supported the planting of 76,000 trees,” Kavi told indiaclimatedialogue.net.

Vodafone India has adopted a 300,000-tree project along the Kanha-Pench wildlife corridor in Madhya Pradesh. The project was completed in 2017 and aims to improve the dispersal of the tiger population in the region and create connectivity between Kanha and Pench National Park. These are important Project Tiger reserves and home to the last surviving source population of tigers. Vodafone offset 33 million kg of carbon footprint generated by its offices, making them carbon-neutral by afforesting 300 acres of forest and community land.

Grow-Trees has shifted its focus to the village of Karwahi, situated close to one of the entry gates of Pench Tiger Reserve. The area faces threat of degradation owing to manmade pressures and lack of governance mechanisms to conserve and protect this area.

Under its Trees for Tigers programme on the outskirts of the Sunderbans in West Bengal, Grow-Trees hopes to plant 150,000 mangrove saplings, as it is the largest deltaic mangrove forest in the world.

Tata Chemicals undertook to plant these saplings between 2016 and 2017. With help from Grow-Trees, the firm planted a total of 85,000 saplings in eight hectares of mud flats in the monsoon of 2016-17.The success ratio of the plantation is about 80%.

The Mumbai-based Naandi Foundation has launched an initiative in Araku Valley, a remote tribal area in the Eastern Ghats of Andhra Pradesh. From year 2000, it started an agricultural project using natural resource management techniques to convert semi-wastelands into organic coffee plantations. In 2010, Mahindra & Mahindra joined in with its Hariyali (greening) initiative. The company has pledged to plant one million trees a year. “We thought the time had come for social forestry projects, where, in addition to plantation, there would also be the potential to create livelihoods,” Rajeev Dubey of Mahindra told indiaclimatedialogue.net.

Till 31 March 2017, the Hariyali initiative had planted more than 7.5 million trees in the Araku Valley. The project has reached out to 100,000 people across 350 villages. Nearly 15,000 acres have been revitalised and 14,750 farmers have benefited. The non-profit Naandi Foundation has undertaken to transform the low-carbon landscape into a high-carbon bio-diverse landscape, improving food security and generating sustainable income for the community by planting 9 million fruit trees and coffee saplings.

By Joydeep Gupta
Protecting just 30% of earth's land and sea could result in financial benefits of nearly USD 235 billion every year by 2050, even without accounting for ecosystem services
END_OF_DOCUMENT_TOKEN_TO_BE_REPLACED

By Neeta Lal
Although there is no lack of good examples that can be adopted, a lack of political will and outdated laws hamper the creation of urban forests in Indian cities
END_OF_DOCUMENT_TOKEN_TO_BE_REPLACED

India can keep its air as clean as during lockdown

By Soumya Sarkar
Kirk R. Smith, who made India his second home, was instrumental in driving policy initiatives to combat indoor air pollution that affects women and children the most
END_OF_DOCUMENT_TOKEN_TO_BE_REPLACED
Share This