What do you do when you are stationed at 12,000ft above sea level in a cold desert like Ladakh but do not have access to 24X7 power? The usual solution is to burn diesel and kerosene to keep warm or, if it’s available, burn firewood.

This is exactly what people in Ladakh have traditionally done and so does the Indian army for scores of its men stationed out there in Ladakh, the trans-Himalayan region spread over almost 85% of Jammu & Kashmir state. With the mercury dipping to minus 20 degrees Celsius or lower during winter nights, and about minus 5 degrees Celsius at night during March and April, it becomes virtually impossible to live without proper heating.

To top it, Ladakh is not connected to the national electricity grid. It has a few areas that get power from local hydropower plants while de-centralised solar power helps in many other remote areas but is highly inadequate.

Impressed after successful pilots, the Indian Army has now taken up a project for the forthcoming financial year starting in April to tap the ever-shining sun both directly and indirectly for keeping people warm through an effective design using local and low-cost materials for passive solar heating for residential buildings.

Sonam Wangchuk, an innovator-entrepreneur from Ladakh, has developed this housing concept. Wangchuk has won the prestigious Global Award for Sustainable Architecture 2017 that recognises the work on “passive solar heated Earth buildings and the Ice Stupa project on sustainable architecture.”

Passive solar design takes advantage of a building’s location and climate with use of materials such as earth and local resources that will lead to low or almost nil use of energy for heating all through the day and still provides sufficient natural light.

With extreme climatic conditions and remote habitations, Ladakh faces massive problems transporting diesel, kerosene and even firewood from long distances. It not just involves cost but also becomes a major contributing factor to air pollution in the fragile Himalayan ecology.

Available sunshine for almost 300 days a year with high radiation is one of the best alternatives to offset the burning of fossil fuel adding to India’s overall emissions. As the third largest polluter in the world (after the US and China), India has pledged in the Paris Agreement to reduce dependence on fossil fuels and encourage renewables in its action plan to combat climate change.

Wangchuk is one of the founders of the Students’ Educational and Cultural Movement of Ladakh (SECMOL). The SECMOL Alternative School, started in 1988 with an aim to reform the educational system of Ladakh, is an eco-friendly campus near Leh town.

The school buildings are heated without using any of the conventional energy sources burning carbon dioxide. But the heating is so good that the temperature in the interiors of the main building at Phey village (near Leh) remains comfortable even in peak winter without electric-powered heating or firewood burning.

Showcasing the so-called earth and sun architecture, as it is called, Konchok Norgay, the teacher in-charge at the SECMOL School, listed the most important feature of the concept — the south face of a building needs to be all windows, as it gets maximum sunrise to sunset exposure in winters.

The SECMOL School’s main building’s south side has a huge thick plastic sheet attached to these windows at an angle. This stops strong chilly winds but allows sunlight and heat in winters. This sheet is rolled up in summer to let in fresh air and to avoid overheating. 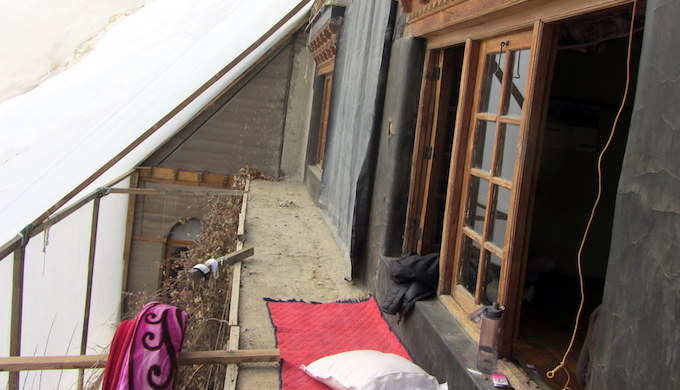 The plastic sheet traps heat and prevents chilly winds from entering during winters. In summers, this is rolled up to let in fresh air (Photo by Nivedita Khandekar)

The top of the building has glass openings to keep the insides of the building well illuminated during the day and also trap heat in winters. Essentially, it is the double-layered, south-facing windows (plastic sheet and glass or both glass) of the main building and also that of the students’ hostel.

The other sidewalls are made of thick mud with insulation in between. The insulation is at times air and at times a mixture of waste paper and dried grass. “The best example for insulation is the room where we have our water tanks,” Norgay told indiaclimatedialogue.net. “We fill those up by diverting running water from a nearby spring at night, and even in peak winters, we can keep it from freezing.”

“The idea of passive solar design is that it absorbs and traps all the heat directly from sunlight and the architecture lets us store it for long,” he said. “Even without using any energy-demanding artificial heating methods, we have been staying and running the school here every winter for more than a decade now.”

The Indian army had invited Sonam Wangchuk to its seminars on warm habitats in cold places like Ladakh. Two winters ago, Wangchuk and his team had even built a prototype of a cost-effective solar-heated mud-built house for officers, and the army has been testing it.

“The Indian Army spends a lot of money and carbon for keeping soldiers warm in a cold place like Ladakh whereas Ladakh is one of the sunniest places,” Wangchuk told indiaclimatedialogue.net. “You don’t really need to drain national treasures to buy Qatar oil and become vulnerable to enemy fire on your supply line. You can be independent in every way using the sun. The model has been proved.”

Echoing what Wangchuk had to say, army officers said the troops had got one shelter constructed at Manla Complex in Skanzangling, near Leh, based on passive solar-heating using local techniques. “As per the feedback received (from Ladakh), the concept and design is successful,” an army officer told indiaclimatedialogue.net. “Although in the current financial year (ending March 31), there was no such project considered for execution, the concept will be considered in future in 14 Corps. However, quantum of habitat planned is not decided yet.”

According to a September 2017 report, the Indian Army was looking for a “durable power supply in high altitudes to enhance the living conditions of its personnel” wherein solar and wind energy, in abundance at high altitudes, are also under consideration. “Solar power projects are few in number and are unable to meet the peak power demand for 21 military stations in winter,” the report had said.

The idea that the relatively low-cost housing pattern can be of use in the long term has found many takers. In view of the demand in future, the SECMOL team, led by Wangchuk, has already been organising short-term courses every summer (Ladakh’s summer is in July and August) on solar design, earth buildings and ecological toilets. In 2017, it organised a festival enabling participants to “learn the essentials of mud and solar construction and celebrate the Sun and Earth”.

It is SECMOL’s way of gearing up to launch young entrepreneurs who can fulfil the Indian Army’s demands through which youngsters would build careers in the mountains and the army will get cleaner habitats with lower costs and carbon footprints. “It will be safer too, because many soldiers are burnt in fire accidents because of kerosene,” Wangchuk told indiaclimatedialogue.net.

By Steve Cole, Erin Guiltenane
In the largest-ever study of glacial lakes, researchers have found that the volume of water in these lakes worldwide has increased by about 50% since 1990
END_OF_DOCUMENT_TOKEN_TO_BE_REPLACED

By Soumya Sarkar
The planet is losing biodiversity at an unprecedented rate, posing grave danger to human health and prosperity, the UN Convention on Biological Diversity warned in its flagship report
END_OF_DOCUMENT_TOKEN_TO_BE_REPLACED

By Soumya Sarkar
The chance of sudden, catastrophic river flooding in the western Himalayas has doubled as climate change leads to an increase in extreme rainfall events
END_OF_DOCUMENT_TOKEN_TO_BE_REPLACED

By Olive Heffernan
With a range of marine geoengineering field trials moving forward, attention is turning to how research and eventual deployment should be governed globally
END_OF_DOCUMENT_TOKEN_TO_BE_REPLACED

By Anjali Notandas
Concerned about the dangers of climate change and environmental degradation, children in India have taken to activism, demanding their rights to a better future
END_OF_DOCUMENT_TOKEN_TO_BE_REPLACED

By Shikha Bhasin
Proper servicing is key to efficient running of environment-friendly cooling systems, demand for which is expected to surge as temperatures rise across India
END_OF_DOCUMENT_TOKEN_TO_BE_REPLACED

By Kamal Prakash Seth
As the biggest consumer of palm oil, India can take a lead in demanding ethical palm oil production that can stop deforestation in southeast Asia and reduce air pollution
END_OF_DOCUMENT_TOKEN_TO_BE_REPLACED

By Soumya Sarkar
Increasing heat-related deaths due to climate change reveal an unequal world, with people in poorer countries at much higher risk, latest research shows
END_OF_DOCUMENT_TOKEN_TO_BE_REPLACED
Share This