With farmers in many parts of India shifting from chemicals-based farming to organic cultivation, experts say that organic agriculture and permaculture have the potential to adapt to climate change.

Massive agricultural growth in India was set off by the chemicals-driven green revolution, but organic agriculture is now growing rapidly all across the country. India has the highest number of organic producers among all nations, with 650,000 of 2.3 million organic farmers in the world reported from India. Last year, Sikkim was declared 100% organic by the government of India.

Organic Agriculture is growing rapidly in all the states of India and cultivated area under certified organic farming has grown almost 17 fold in the last one decade from 42,000 hectares in 2003-04 to 723,000 hectares in 2013-14.

With increasing awareness about health, changing lifestyles and increased spending capacity in India, the organic food market is said to have a brighter future in the country. A recent study of the federal government says that this market is expected to touch USD 1.36 billion by 2020.

According to UN’s Food and Agriculture Organisation (FAO), India, where 70% of the rural households depend primarily on agriculture, ranks as the second largest producer of rice, wheat, sugarcane, groundnut, vegetables, fruit and cotton. It is the world’s largest producer of milk, pulses and jute, and one of the leading producers of spices, fish, poultry, livestock and plantation crops.

The Fifth IPCC assessment report predicts that climate change at the global level could affect food security by the middle of this century and that most of the food insecurity would continue to be in South Asia, which hosts some 300 million undernourished people. “Climate-related declines in food productivity will impact livelihoods and exports, increasing poverty levels. For instance, in Bangladesh, these factors would cause a net increase in poverty of 15% by 2030,” the report says.

A report prepared by Climate Action Network South Asia and Asia Pacific Adaptation Network says that agriculture is the mainstay of several countries in South Asia and is also one of the largest sources of employment continuing to be the single largest contributor to the GDP in the region.

As three-ﬁfths of the cropped area in South Asia is rain-fed, the economy of the region, says the report, hinges critically on the annual success of the monsoons, indicative of the well being of millions. “In the event of a failure, the worst affected are the landless and the poor whose sole source of income is from agriculture and its allied activities.”

Vandana Shiva, who runs a campaign Jaivik Kranti for Anna Swaraj, which recommends actions for rejuvenating India’s agriculture, food and health by regenerating soil, water and biodiversity, says that India needs to become 100% organic in an era when climate change poses a host of challenges, especially to agriculture.

“Sikkim is 100% organic and my hope is that by 2022 at least 10 states shift to ecological farming as a commitment,” Shiva said during the recently held International Permaculture Conference in Hyderabad, the capital of Telangana in southern India. According to her, the transition to biodiversity intensive, ecologically intensive agriculture addresses both the climate crisis and the biodiversity crisis simultaneously, while also addressing the food crisis.

External chemical inputs such as pesticides, Shiva said, destroy the soil and ecological balance by killing friendly insects. “Given India’s tropical climate, we have so much insect diversity that they do a more intelligent job than pesticides. And since tropical climate allows diversity of insects to thrive, you have a best pest-predator balance. Most of the insects are friendly and they don’t need extermination,” she said. 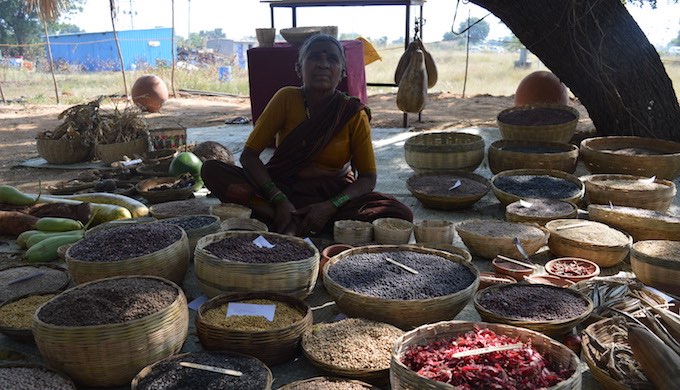 He observes that the number of organic farmers in India would rise to 1.2 million in the next few years due to the Participatory Guarantee System (PGS) which is implemented and controlled by the committed organic farmer-producers through active participation, along with the consumers, in a process based on verifiable trust.

Politically, Alvares says, there is a lot of support for organic farming in India. When the agriculture minister of India spoke during the recent Organic Congress in New Delhi, he spent 30 minutes ridiculing chemicals-based farming. The agriculture minister of Uttar Pradesh, Alvares said, also lambasted chemicals and urged the farmers to come to the organic congress with the offer that their travel and other costs would be borne by his ministry. “The government in Andhra Pradesh, where huge areas have been transformed into organic agriculture, is employing youth for getting trained and promoting organic agriculture,” he said.

So, Alvares opined, these are the tectonic shifts taking place in India’s political scenario as far as promoting organic agriculture is concerned. “The Chief Minister of Kerala, who addressed one of the plenary sessions, said Kerala government would do everything possible to support Kerala’s farmers to go organic. And the Chief Minister of Sikkim said ‘it has taken us 10 years to get rid of chemicals and now we don’t want them (chemicals) again in Sikkim’.”

According to Alvares, many organic farmers in India are now redesigning their farms to look after their topsoil, the trees and the biodiversity. These farms, he says, are real masterpieces of organic agriculture and permaculture, which follow the example of forests where best soil is created. “If every farmer duplicates it, then we really don’t have to worry about the phenomenon of climate change,” Alvares said during the International Permaculture Conference held in Hyderabad.

Australian Ecologist Bill Mollison, who is regarded as the father of permaculture movement in the world, first propagated the idea of permaculture in the 1970s following several years of research during which he became concerned about destruction of natural processes.

He came up with a solution based on the patterns he had observed in nature and named it as permaculture (the contraction of words permanent and agriculture). Mollison defined permaculture as “a philosophy of working with, rather than against nature; of protracted and thoughtful observation rather than protracted and thoughtless labour; of looking at plants and animals in all their functions, rather than treating any area as a single-product system.”

The permaculture movement has now spread in 140 countries with more than three million people practicing permaculture. “Permaculture comes closest to imitating the principles of forest…. In terms of the scarcities that we do face, particularly water scarcity, I think permaculture is the ideal system to do farming without chemicals. It is the only system that can continue as a system of farming for several centuries because it creates everything within the system,” Alvares said. “Even in organic farming, organic matter is mostly taken from outside the farm which is not a good principle because then you are depriving some other part of the planet from organic matter.”

Permaculture, according to prominent soil biologist and ecologist Sultan Ahmed Ismail, plays a huge role in soil health. “In the farming driven by chemicals, synthetic fertilisers are pumped into the crops whereas organic farming or permaculture focuses on soil-health. When the soil is healthy and well-nourished, it automatically feeds the crops with essential nutrients,” Ismail observes.

The 68th UN General Assembly declared the period 2015 to 2025 as the International Decade of Soils so that the required activities on national and international levels are carried out for combating soil degradation and ensuring proper soil management at global level.

According to Shiva, rejuvenating water, biodiversity and soil can rejuvenate climate balance. “The climate balance requires the capacity of the earth to reabsorb the (greenhouse gas) emissions. And therefore, the emissions can’t be beyond the absorption capacity. We’ve got to heal the carbon cycle and the nitrogen cycle, and there is only one path to it — ecological farming.”

By T.V. Padma
People in the middle ranges of the Indian Himalayas are the most vulnerable to climate change and they are finding it difficult to adapt to the changed weather patterns
END_OF_DOCUMENT_TOKEN_TO_BE_REPLACED

By Abha Indurkar
Since women interact with their immediate environment more than men, they have better knowledge and understanding on the need to adapt to the changing climate
END_OF_DOCUMENT_TOKEN_TO_BE_REPLACED

By Soumya Sarkar
Billions of people will suffer from water stress and deprivation that is aggravated by climate change, the United Nations said in a report on World Water Day
END_OF_DOCUMENT_TOKEN_TO_BE_REPLACED

By Joydeep Gupta
Despite the drought gripping this region of India, one village in Marathwada in Maharashtra has flourished by growing grapes using innovative water saving methods
END_OF_DOCUMENT_TOKEN_TO_BE_REPLACED

By Joydeep Gupta
Even six years after the Warsaw International Mechanism for Loss and Damage was established, there is little hope for getting funding for climate disasters
END_OF_DOCUMENT_TOKEN_TO_BE_REPLACED