The 2004 Indian Ocean tsunami, which buffeted the east coast of India and caused extensive damage to Nagapattinam in Tamil Nadu, left the neighbouring area of Pichavaram, covered in a dense mangrove forest, relatively unharmed. It was one of the landmark events that brought attention to the fact that mangroves act as a bio-shield during natural disasters and aid in adaptation to climate change.

“The tsunami was a wake-up call,” A. Saleem Khan of the Centre for Climate Change and Adaptation Research (CCCAR) in Anna University told indiaclimatedialogue.net. “Nagapattinam, one of the most affected areas, was a few kilometres away from Pichavaram. However, Pichavaram was not heavily affected. Many scientists concluded that these mangroves were a bio-shield to the ecosystem during a coastal disaster like tsunami.”

Pichavaram, the vast expanse of mangrove forests near Chidambaram in Cuddalore district of Tamil Nadu, is located between two estuaries —Vellar estuary in the north and Coleroon estuary in the south. Pichavaram mangroves have been under the threat of sea level rise (SLR) through sediment erosion, inundation stress and increased salinity in the land areas. These problems will be exacerbated for mangroves that are subjected to coastal squeeze — where migration of these mangroves towards land is restricted by topography or human developments.

Coastal managers, adaptation planners, and policymakers face major challenges to frame suitable coastal adaptation strategies to SLR without reliable, scientific information. Adaptation is considered one of the most appropriate response strategies to address the challenges of SLR at a local level, particularly to conserve major coastal resources. Importantly, planning for adaptation policies by coastal policy planners and decision-makers requires a pragmatic approach.

Due to lack of climate data in the coastal areas, there is not enough understanding on the impact of changing climate on coastal ecosystems. This is a deterrent, as one cannot frame climate-based adaptation strategies and policies at the local level.

Such comprehensive information is rarely available, and seldom lies in the hands of decision makers responsible for the management of the coastal zone. Though there is an understanding of SLR trends, there is uncertainty around its rate and timing. Coastal managers, adaptation planners and policymakers may need scientific information on the SLR projection at the local level — how much will the sea level rise, when will it rise?

However, adaptation measures can offset anticipated mangrove losses and improve resistance and resilience to climate change. Coastal planning, specifically, can be an adaptation tool to facilitate mangrove migration with rising sea level.

A first step towards planning adaptation policies of SLR would be the projection of SLR at the local level at different time scales and at its different scenarios, as devised by the Intergovernmental Panel on Climate Change (IPCC). When future projections are modelled, it could be a crucial input in devising adaptation planning and implementation. 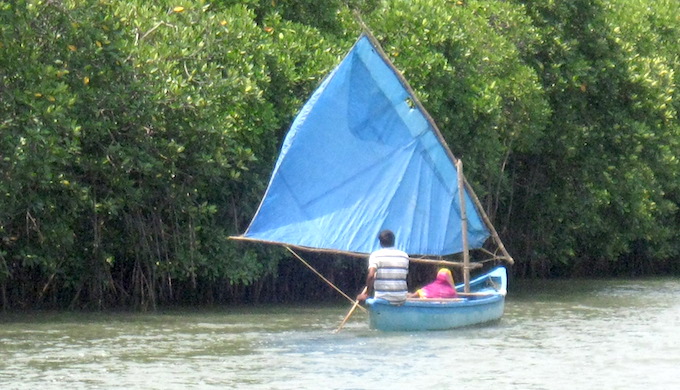 “The science behind this is mean sea level, which is an average of high and low tides. It is a benchmark from IPCC. This may differ from Chennai to Kanyakumari,” Khan told indiaclimatedialogue.net. “For analysing the trend of sea level, we need a minimum of 30 years data. Only then is it called climate information.”

The climate variables are collected and put in a repository. The global data is then projected. Khan says, “Since we need local and regional information, we downscale the global data to local area information through the grid method, using climate modelling.”

The vulnerability of coastal areas in Vellar-Coleroon estuarine region of Tamil Nadu coast to inundation was calculated on the projected SLR scenarios of 0.5 m and 1 m. According to Khan’s paper, Predicted impact of the sea-level rise at Vellar-Coleroon estuarine region of Tamil Nadu coast in India: Mainstreaming adaptation as a coastal zone management, out of the total study area of 6,541 ha, about 1,570 ha will be inundated to 0.5 m SLR, and at 1 m SLR, about 2,407 ha will be inundated. Dense mangrove area of about 265 ha and 373 ha will be under severe threat of inundation to 0.5 m and 1 m SLR.

Three major coastal natural resources — agriculture, mangroves and aquaculture farms — and the dependent communities are at a high risk of inundation due to rising sea level, the study confirmed.

He adds, “One third of the land may go under water, and we have given these predictions for 2050 and 2100 under a moderate or balanced scenario as defined by IPCC. This is assuming that everything goes in the same speed.” If there is change in population or industrial development, these numbers could go higher or lower.

The paper suggests that long-term strategic adaptation plans for the full range of possible SLR need to be widely developed. However, the constraints on approaches to adaptation due to broader policy and development goals should be carefully considered.

The recommendation on adaptation strategies from Khan’s study was included in the SLR chapter of the State Action Plan on Climate Change of Tamil Nadu. “We have a number of policies on coastal areas, and we need to have a mainstreaming approach to existing policies,” Khan told indiaclimatedialogue.net. “This falls in line, and works in parallel with the development plan of Tamil Nadu.”

To protect the mangroves from SLR, Khan recommends landward migration. This concept emphasises increasing mangrove population on the land rather than the seaward side. This is one of adaptation strategies that have been mainstreamed in Tamil Nadu.

“We need to increase the thickness of the mangroves towards the land side,” Khan said. “This activity is being done by the forest department and MS Swaminathan Research Foundation (MSSRF) for restoration of Pichavaram mangroves, much in tune with the government of India’s effort to protect them.”

By Christopher Trisos, Alex Pigot
Rather than slowly sliding down a climate change slope, many ecosystems many fall off a cliff edge, negatively impacting the mostly poor people who depend on them
END_OF_DOCUMENT_TOKEN_TO_BE_REPLACED

By Joshua Stevens, Kasha Patel
Satellite data show that air pollution levels have dropped significantly over northern India since the country enforced a nationwide lockdown to control the spread of coronavirus
END_OF_DOCUMENT_TOKEN_TO_BE_REPLACED

Mangroves can prevent billions of dollars in flooding damage

By Michael Beck, Pelayo Menéndez
Preserving and restoring mangrove forests can be an extremely economically effective strategy for protecting coasts from tropical storm damage across the world
END_OF_DOCUMENT_TOKEN_TO_BE_REPLACED

By Soumya Sarkar
Billions of people will suffer from water stress and deprivation that is aggravated by climate change, the United Nations said in a report on World Water Day
END_OF_DOCUMENT_TOKEN_TO_BE_REPLACED

By Fred Pearce
New climate models show a warming earth will lead to a loss of clouds, allowing more solar energy to strike the planet, which could cause temperatures to soar far above previous estimates
END_OF_DOCUMENT_TOKEN_TO_BE_REPLACED

By Soumya Sarkar
Climate change, land degradation and deforestation are combining to jeopardise global food security unless radical changes are made, warn scientists from around the world
END_OF_DOCUMENT_TOKEN_TO_BE_REPLACED

By Joydeep Gupta
Despite the drought gripping this region of India, one village in Marathwada in Maharashtra has flourished by growing grapes using innovative water saving methods
END_OF_DOCUMENT_TOKEN_TO_BE_REPLACED
Share This