A high-energy swell from the Southern Ocean caused extensive damage to coastal areas in Kerala, with some scientists saying that seawalls and breakwaters worsened the impact 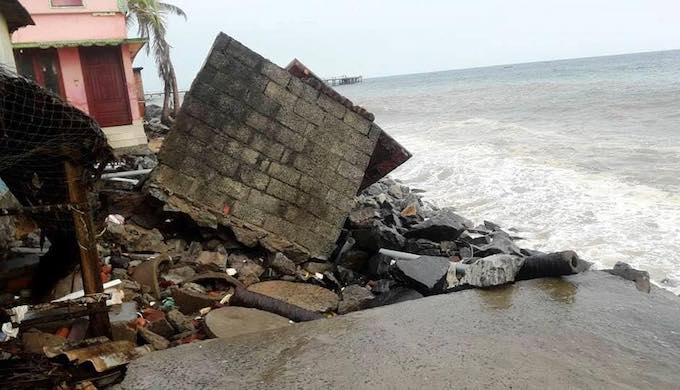 They rolled in relentlessly, hiding packs of energy that they unleashed on sandy seashores of southern India, where they crashed as high waves, carving out parts of it, cracking house walls, and tunnelling roads. A high-energy swell originating from the Southern Ocean hit the coasts of south India since April 21, inundating low-lying coastlines for up to 200 metres in some places.

The swell showed the impacts of a storm in the Southern Ocean 9,000 km away. The local fishers are apprehensive of more high wave events in the run up to the monsoon that starts on June 1. Meanwhile, coastal protection measures in vogue, such as sea walls, are possibly amplifying the wave impact.

The rough sea warning was in place till April 24 for the west coast, the Lakshadweep Islands, and southern Tamil Nadu and for another day for the east coast and Andaman and Nicobar Islands.

South Indian fishers call this kind of swell kallakkadal, the Malayalam term denoting deceptive sea. “Till the swell reaches the seashore, you won’t know the waves would grow so big and have such an impact,” Aloysius Gomez, a science teacher in Puthukurichy, a fishers’ village 24 km north of Kerala’s state capital Thiruvananthapuram, told indiaclimatedialogue.net. “But they grow in size and crash hard on the shore and take away a lot of sand.”

Further north, the crowded fishing village of Anchuthengu, a 17th century British colonial outpost, bore the brunt of the wave attacks, damaging 11 houses. Soosa Melkias, a fisherman who convenes the local disaster risk reduction committee, told indiaclimatedialogue.net that a row of houses close to the high tide line that includes his own has been badly damaged. Some of these houses were already damaged in Cyclone Ockhi of November 2017. The villagers said they were now bracing for the onset of monsoon.

Closer to the state capital, Valiathura, an old port village, the tourist village of Shanghumukham and several other nearby villages have suffered major damage, requiring evacuation and traffic diversion. Houses and roads have been damaged.

Kerala state government has declared a compensation of INR 400,000 (USD 5,870) for houses left uninhabitable, INR 50,000 for major repairs and INR 15,000 to repair huts on the beach. Chief Minister Pinarayi Vijayan said that fishers would be relocated from vulnerable places under a government scheme. He also promised to strengthen sea walls, a protective measure that is increasingly coming under criticism for their long-term impacts.

Swell-related seasonal high wave events have been recorded before, but it is the first time the science behind it was clearly explained in countrywide forecasts. The Indian National Centre for Ocean Information Services (INCOIS), a Hyderabad-based institution under the Ministry of Earth Sciences, has warned about intermittent high period (15-17 seconds) swell waves with 2 to 2.5 metre height, leading to rough sea near shore and coastal flooding.

Ocean waves generated in a wind field that travel away from it — even across ocean basins — are called swell. Swell period denotes the time it takes for successive waves to pass the same point. Long-period swells look flat in deep sea, but they pack in more energy than short-period ones, and create damaging high waves close to shores.

INCOIS advised fishers to be on alert during high tide, avoid sailing close to the shore, and anchor boats safely away from one another. For several days, there was an advisory against fishing as well.

An INCOIS scientist leading marine forecasts explained to indiaclimatedialogue.net that the high period swell came from the Southern Ocean, the sea around Antarctica, south of 60 degrees south. “These are generated by storms or even sustained winds in the Southern Ocean,” the scientist said. “These swells take almost six days to reach and hit the Indian southern tip.” 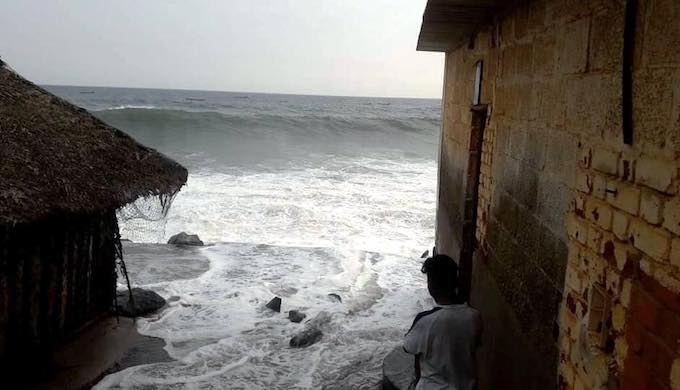 They resulted from a low-pressure event lasting three days since April 15 about 9,000 km away from the Indian coast, with extremely high waves and wind, sending its impact far and wide, INCOIS scientists added. The centre used numerical modelling, and observations from its offshore floating and moored buoys to forecast the event, explained T.M. Balakrishnan Nair, who heads the INCOIS Information Services and Ocean Sciences Group.

Earlier research has shown the effect of faraway events on the shores of South India. During May 17-21, 2005, several villages on the coasts of Kerala and Tamil Nadu — many of them still recovering from the impact of the 2004 Indian Ocean tsunami — were flooded by high wave events. In a 2005 study, M. Baba, the erstwhile director of the National Centre for Earth Science Studies in Thiruvananthapuram noted that ocean waves with periods around 15 seconds and 2 metre height were approaching the coast continuously during all these days. There was no local wind field and the southwest monsoon had not set in yet.

A 2016 INCOIS study has confirmed the high swell events in the North Indian Ocean in 2005 caused by the swells propagating from the Southern Ocean. Three to five days prior to these events there was a severe low-pressure system, called the Cut-Off Low (COL) in the Southern Ocean, as INCOIS scientist P.G. Remya and colleagues found. These are closed upper-level weather systems completely cut off from basic westerly currents of air, moving independently. They may remain almost stationary for days, or on occasion may move westward opposite to the prevailing flow.

These events can locally generate strong winds of about 25 metres a second that last about three days over a large fetch, generating long‐period swells that propagate to North Indian Ocean (of which the Arabian Sea is a part). “Furthermore, these swells cause high wave activity and sometimes Kallakkadal events along the NIO coastal regions, depending on the local topography, angle of incidence, and tidal conditions,” Remya and colleagues noted.

The Southern Ocean is notoriously stormy, a nightmare documented by sailors since the 18th century. Further north, strong pressure difference between the sub-Antarctic trough (low-pressure belt) and the sub-tropical high pressure belts have given rise to rough seas described in geography textbooks as “roaring forties” and “furious fifties.”

Besides being a significant sink for heat and carbon dioxide, the Southern Ocean influences the global currents with its coldest, densest water. Strong westerlies over the Southern Ocean drive the world’s largest current system called the Antarctic Circumpolar Current that connects the Atlantic, Pacific, and Indian Oceans, and the deep ocean to the surface with a massive flow of water.

Ocean currents act as conveyor belts that transport warm water and precipitation from the equator to the poles and cold water in the opposite direction. They regulate the global climate, in a way compensating for the uneven distribution of solar radiation on the Earth’s surface. As a result, changes in Southern Ocean currents and sea ice can affect global climate.

Locally, while the government is proposing more and better stone structures in view of coastal erosion, a section of scientists have questioned the wisdom of such interventions. They tend to increase erosion on their unprotected side, and interfere with the natural beach-building processes, scientists point out.

A 2010 study by the National Centre for Sustainable Coastal Management (NCSCM) under the Ministry of Environment, Forests and Climate Change has found that more than half of Kerala’s 590-km coastline was “artificial” with seawalls, groynes and riprap revetments (sloping structures made of loose material to absorb wave energy). Only less than a quarter of the coast was classified as accretion zone where there is natural beach building.

“Over the last 40 years sandy coast has become interspersed at frequent intervals with physical structures such as groynes and breakwaters,” Nandakumar D., former professor of geography at University College, Thiruvananthapuram, and senior advisor, climate change and environment at InterCooperation Social Development, told indiaclimatedialogue.net. “While breakwaters are constructed with the intention to safe land fishing crafts, groynes are to capture the sediment drift and protect the beach where the small scale fishers dwell, keep their small crafts and gear.”

However, most of the breakwaters that were constructed, often at river or estuarine mouths, accelerated erosion on the northern side while accreting sand on the south. “This unintended and unpredicted erosion and accretion caused by these structures has converted what was once a predominantly sandy coastline into one which is lined with granite seawalls,” Nandakumar said. “The granite walls or sea walls became short-term solution but at a very high financial cost.”

“These engineering interventions and their solution indicate poor understanding of coastal geomorphology,” he said. “Coastal processes all over the world are dynamic and it is all the more intense in tropical coasts. The south western coast is exceptionally dynamic due to its configuration — short continental shelf and rapid littoral (shore) currents.”

In Anchuthengu area, for instance, the seashore north to a couple of harbour breakwaters is facing severe erosion. Every monsoon a part of the shore disappears. “We need more protective groynes in our village, or the whole shore will go,” Jerome, a local boat owner, told indiaclimatedialogue.net. Stone structures lead to cascading replication as it shifts points of erosion. In Valiathura, erosion has worsened after massive breakwaters were built for a port in Vizhinjam about 15 km south of the village.

As environmental change and weather events make fishing lifestyles risky, the fishers are looking at their own communication and warning systems to stay safe. Gomez, who runs a shoestring dissemination service of INCOIS marine forecasts in the local language Malayalam over the Internet and free phone calls, counted a record number of calls during the swell event.

Meanwhile in Anchuthengu, Melkias and colleagues — fans of Gomez’s Radio Monsoon — are looking for a way to get these bulletins over small portable loudspeakers when they launch their boats; and may be on air one day.

By Joydeep Gupta
The morning after the strongest cyclone ever to hit West Bengal shows tremendous destruction. There is still no news from much of Sundarbans
END_OF_DOCUMENT_TOKEN_TO_BE_REPLACED

By Joydeep Gupta,  Zobaidur Rahman Soeb
In West Bengal, evacuees and people quarantined for possible coronavirus infections are crammed inside the same buildings because there are no other shelters
END_OF_DOCUMENT_TOKEN_TO_BE_REPLACED

By Sharada Balasubramanian, Jency Samuel
Fisheries markets collapsed in the first days of the lockdown, impoverishing hundreds of thousands of small fishers in India, and recovery is nowhere in sight
END_OF_DOCUMENT_TOKEN_TO_BE_REPLACED

By Richa Singh
India’s second longest river is flowing clean in the lockdown forced by Covid-19. A grim reminder of how it was before could persuade us to keep it that way
END_OF_DOCUMENT_TOKEN_TO_BE_REPLACED

By Christopher Trisos, Alex Pigot
Rather than slowly sliding down a climate change slope, many ecosystems many fall off a cliff edge, negatively impacting the mostly poor people who depend on them
END_OF_DOCUMENT_TOKEN_TO_BE_REPLACED

By Joshua Stevens, Kasha Patel
Satellite data show that air pollution levels have dropped significantly over northern India since the country enforced a nationwide lockdown to control the spread of coronavirus
END_OF_DOCUMENT_TOKEN_TO_BE_REPLACED