Economies have to decarbonise to stay competitive

Donald Trump’s decision to pull the US out of the Paris climate agreement has done little to halt decarbonisation of the global economy, says former UNFCCC Executive Secretary Christiana Figueres 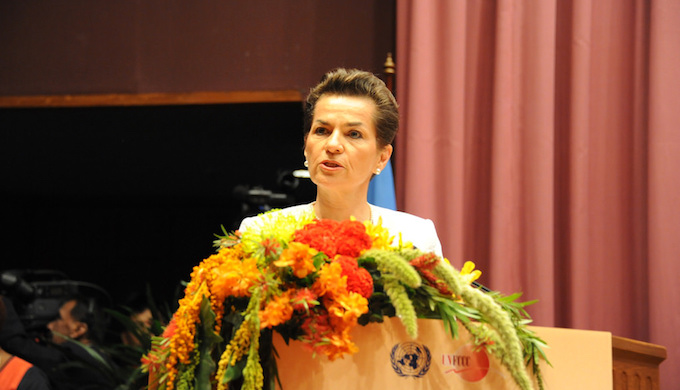 A year after US President Donald Trump said that he will pull the United States out from the Paris Agreement on climate change, the economic benefits of decarbonisation seems to outweigh the political dimensions of the decision, according to Christiana Figueres, former Executive Secretary of the United Nations Framework Convention for Climate Change (UNFCCC). She said that the Global Climate Action Summit, to be held in California in September this year, would enable sub-national governments and public and private sector players to chalk out an action plan to implement the Paris agreement. Edited excerpts from an interview.

It’s been a year since US President Donald Trump announced plans to withdraw the United State from the Paris Agreement. What affect has this had on momentum to address climate change?

I think the effect has been differentiated. There has been a political effect and there has not been an economic effect. What do I mean by that? The politics of the US, or rather by the White House, announcing its withdrawal from the Paris Agreement certainly sends political and diplomatic ripples throughout the world because it negates all the work that was done, in particular between the US and China during six years for those two countries to lead the world to the Paris Agreement.

From a real economic perspective, I don’t think that this is going to have a huge effect because decarbonisation now, both from a technical and a financial perspective, is entrenched enough. It’s not moving forward fast enough but nonetheless entrenched enough. We now have a path that is irreversible and unstoppable and so the global economy continues to decarbonise.

China continues to lead the world there. China doesn’t do this to save the planet or for any altruistic motive. It does this for clear and powerful reasons, of which the number one is health problem in cities. The air pollution in China is known throughout the world, not in all of China, but in cities. The fact that there is already civil society unrest and push to clean up the air is very important, and even more important is that the government is paying attention and closing coal down in cities.

The second reason why China is taking a leadership position is because China can really see the long-term development of the economy, can really see that we’re moving here towards a decarbonised economy and those countries that want to be competitive need to decarbonise. China wants to be the world leader in such technology not just for its own installations but also for exporting products and technologies. China has invested in 5 -7 mega factories for batteries because it understands that that is going to be a huge market. China is investing today into the demands of tomorrow, thereby creating 13 million jobs into the new economy and they will be very competitive.

The third reason why China is doing this from a macro political point of view is that China’s leadership has been very clear that it wants to lead the word into an ecological civilisation, and that has to be done through a greening of the economy and a greening of the financial structure as well. Kudos to China.

Everyone is very focused on China’s emissions at the moment, which look to be going up because of coal burning. Nonetheless, China is still likely to meet its 2030 target.

How do you see the future of the US-China relationship around climate cooperation developing in the near and long terms?

I think that’s going to depend very much when and where does the US want to cooperate. It doesn’t seem to be too concerned about that right now but it will return. I have full trust that reason will prevail and leadership in the US will understand, whether it takes three more years or less will depend but I think the US will understand that in a global economy, where we are increasingly intertwined and interdependent, we do have to do things in a multilateral way and in cooperation with each other.

My sense is that China is still very open to collaboration with the US and other countries, but of course, is not responsible for the other stance of other countries other than itself.

You have seen interesting discussion open up at a sub-national level between countries. For example, California’s Governor Jerry Brown has been pushing his state’s economic ties with China, particularly around electric vehicles. You are seeing these partnerships opening up. Do you think this is a significant area of development?

Yes, absolutely. A lot of attention now is moving to cities, provinces and states for several reasons. The first is that what the world needed to do on climate change at the national level was substantially achieved with the Paris Agreement. That was a legal framework where only national governments could negotiate with each other and sub-national governments could not do that.

And now that it’s about executing that plan and drilling down into the Paris Agreement, that really does involve other levels of government and public ad private sector corporations as well. So it’s a very natural devolution down to that level of work, where the day-to-day decisions are being made. And so I think there is no surprise that that is where conversation is focused now, which is why we are focusing on the global climate change action summit in September.

The action summit aims to bring together a number of global entities that are truly engaged in this process. It is also for national governments to derive the necessary level of confidence to come back to the table next year at the United Nations to increase their commitments, which is what they need to do according to the Paris agreement. They need to come back to the table every five years and that will be in 2020. They need to have finalised the process of their increased ambitions. And in order to inspire that review, we support the global action summit to be held in California.

By Jai Kumar Gaurav, Akshar Bhatt, Kundan Burnwal
A long-term low-carbon economic strategy can help a country to reduce policy uncertainty, which would help investment decisions by both the public and private sectors
END_OF_DOCUMENT_TOKEN_TO_BE_REPLACED

By Navroz K Dubash
While an Indian net-zero announcement may add to the international momentum, it also risks being a hollow pandering to global pressures at best
END_OF_DOCUMENT_TOKEN_TO_BE_REPLACED

By Soumya Sarkar
The United States under President Joe Biden has re-entered the Paris climate agreement, providing a renewed impetus to act on the world’s deepening climate crisis
END_OF_DOCUMENT_TOKEN_TO_BE_REPLACED

By Joydeep Gupta
India is meeting its current unambitious pledge, but it is still pushing coal and failing to protect natural resources needed to protect people from the worst impacts of climate change
END_OF_DOCUMENT_TOKEN_TO_BE_REPLACED

By Lou del Bello
Developed countries are taking action to reduce their own carbon emissions, but they are not coughing up enough money to help vulnerable poorer countries do the same
END_OF_DOCUMENT_TOKEN_TO_BE_REPLACED

By Joydeep Gupta
US president-elect Joe Biden has strong popular backing to deliver action on climate change, which could provide impetus for countries worldwide to follow suit
END_OF_DOCUMENT_TOKEN_TO_BE_REPLACED

By Soumya Sarkar
The planet is losing biodiversity at an unprecedented rate, posing grave danger to human health and prosperity, the UN Convention on Biological Diversity warned in its flagship report
END_OF_DOCUMENT_TOKEN_TO_BE_REPLACED

By Olive Heffernan
With a range of marine geoengineering field trials moving forward, attention is turning to how research and eventual deployment should be governed globally
END_OF_DOCUMENT_TOKEN_TO_BE_REPLACED
Share This