Pilgrims celebrating the arrival of the Ganga from heaven at the Ganga Dussehra festival are actually bathing in a canal; the original course of the river has dried up in Haridwar

The Ganga Dussehra festival is a mix of white cotton with bright yellow-red hues, fresh hot breakfast and an offering of redemption from sin. The summer morning air was filled with the smell of food, flowers and faith. The roads leading to the Har Ki Pauri and other ghats were a mess of devotion and confusion. It is at Haridwar in Uttarakhand that the Ganga finally leaves the Himalayas, the abode of Gods, to then enrich the plains with fertility and her blessings.

The Ganga Dussehra, celebrated every year on Dashmi (the 10th day) of the Shukla Paksha (waxing moon cycle) in the Jyeshtha (high summer) month of the Hindu calendar, is a celebration of the Goddess’ arrival on Earth from Heaven. Celebrations are held at ghats in villages and cities all along the river Ganga. Considered extremely auspicious, a dip in the Ganga on this day is said to rid one of up to 10 lifetimes of sins.

While pilgrims with smartphones take selfies on the bridge, one man under the bridge dangles a catch net into the fast flowing waters to scrape off offerings from the water. These will be then repackaged and resold in the market

News reports say that over 1 million pilgrims visited Haridwar alone for the Ganga Dussehra celebrations on May 24, 2018. For a culture deeply invested in karmic balances and the cycle of birth and death, this year is a bonanza. Thanks to an anomaly in the Hindu calendar, this year has an extra Jyeshtha month (a feature called ati-mah or additional month). Therefore, Ganga Dussehra will be celebrated again in 2018, and is scheduled for the June 22 in the Gregorian calendar.

Women and children walk in a file, holding hands so that no one gets lost in the rush of activity at the bathing ghats

All of this is of course happening along the canal that comes from the Bhimgouda barrage, while the actual course of the Ganga – even on the day that marks her descent to Earth – remains dry. The waters of the Ganga is absent for eight months a year as its flow is dammed and diverted for power and agriculture. We continue to celebrate the river we’ve created, instead of the actual entity that calls out for help.

If the celebrations are instead shifted to the banks of the actual river, who knows, the river might be allowed to flow through its actual course at least for a few days. Most visitors and pilgrims today are completely oblivious of this fact, assuming the canal to be the actual river.

Young men jumping into the fast flowing waters at Har Ki Pauri, each trying to jump higher, and more times, than the rest

The celebration at Haridwar, much like any other festival, was an explosion of colour and activity, while also providing for livelihoods through endless products and services on sale. The many pandits with their rituals, street food vendors, toy sellers capitalising on the presence of children, selfie-stick sellers and those selling faith or objects of faith. Just the ability of finding peace and personal space in such an overwhelming situation might qualify one for karmic points.

Pilgrims from across the country had travelled for the Ganga Dussehra celebrations. All rituals aside, it was interesting to see how folks who had travelled from long distances, were navigating the tight spaces and language barriers.

There were multiple free food camps set up for visitors, far from the hustle of the main ghats that are mostly commercialised. We’d often also find people in deep conversation, discussing possible routes and timings of getting back to their villages.

The police and civic volunteers were on active duty, especially on the many bridges over the canal, for fear of overloading beyond the structure’s intended capacity. Other folks also on active duty were the local boys who were showing off their machoism by constantly leaping into the fast flowing waters of the canal. Some would then drift from bridge to bridge, clinging on to the iron chains dangling from each of these successive bridges.

The evening Ganga Aarti (prayers) at the Har Ki Pauri ghat, the flames of faith at the river

As the day warmed up, the activities started to cool down. The longer part of the day spent in meditative introspection, something that festivals such as this – built around the idea of good and bad deeds – have the capacity to induce. This also gave a break to the hard worked policemen and civic volunteers, who had to then prepare for an evening of even larger crowds.

The evening aarti (when songs are sung and lamps lit and offered to deities) at Har Ki Pauri, Haridwar is a popular attraction every day of the year, but the crowds that gather on days like the Ganga Dussehra can really swell into a huge number. There’s certain energy in the air at this time, when people are made to take an oath to never pollute the river again, an almost hopeful moment. 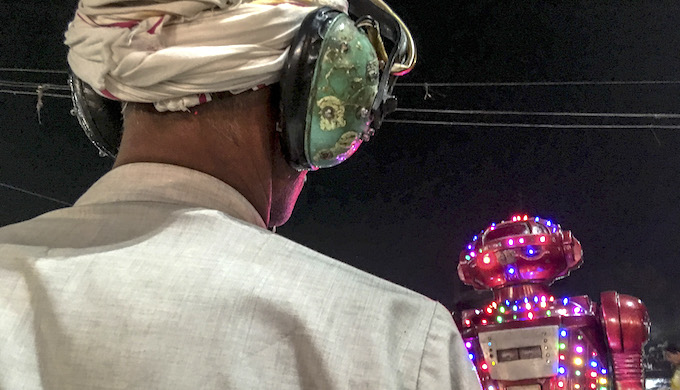 Man listening to what a robot has to predict for his future, a common sight at Indian fairs and festivals

After the aarti, rituals continue as more people arrive at the ghats to partake their share of sin resolution. This ritual involves taking dips in the water and an offering of flowers and lighted diyas in a leaf container.

When walking along the Ganga in the past couple of years, villagers had shared with me some interesting stories related to this festival. In one of these places in Uttar Pradesh, groups still go on weeklong walks along the river, returning on the day of Ganga Dussehra for final celebrations.

The dense crowds at the banks of the rivers, a flowing river of humanity in itself

On the other hand, I heard complaints from old folks in Bengal. They say old traditions have been quashed. There used to be extended fairs, markets and festivities on the riverbanks during the Ganga Dussehra.

But under the extended governance of the CPI(M) party, which was in power in Bengal for decades, this is now almost forgotten. Today celebrations are restricted to prayers and offerings by a few on the ghats.

As a man takes a dip at Har Ki Pauri, devotional offerings disappear past him into the river

These local practices of celebrating our rivers are slowly vanishing, as is the physical form of the river. How much longer till it loses its powers to forgive our sins?