Changing rainfall patterns cause for worry in India

Since June 13, there has been a hiatus in the advance of southwest monsoon in the country due to the weakening of its circulation pattern. This dry spell is expected to soon change as the monsoon is likely to advance further over Assam, some more parts of Maharashtra, Chhattisgarh, Odisha, West Bengal and parts of Jharkhand, Bihar, Madhya Pradesh and south Gujarat by June 25, as stated in the recent weather status and outlook of the India Meteorological Department (IMD). But, the dry spell is already a matter of concern.

As per the Hydromet Division of the IMD, between June 1 and June 22 this year, several meteorological sub-divisions in the northwest, northeast and east India have reported deficient (minus 59% to minus 20%) and large deficient rainfall (minus 99% to minus 60%).

The situation is grim in the meteorological sub-divisions of Saurashtra and Kutch, and Gujarat region, which have reported rainfall departure of minus 97% and minus 91%, respectively.

Overall, as of June 22, only 10 states and union territories (UTs) have reported normal rainfall (minus 19% to plus 19%) in the country. Eleven have reported deficient rainfall and three are in the category of large deficient. Meanwhile, eight states and UTs had excess (20% to 59%) and three had large excess rainfall (60% or more), respectively.

Whereas the southwest monsoon is expected to pick pace now and eventually cover the entire country with some delays, an IMD study, titled Long term rainfall trend over meteorological sub divisions and districts of India, published in July 2017 issue of MAUSAM, a quarterly research journal of the Met department, has found that the annual rainfall in the country is showing a significant increasing trend in 10% of the districts, whereas 13% of the districts show a significant decreasing trend.

Three scientists of the IMD — Surinder Kaur, Sumant Kumar Diwakar and Ashok Kumar Das — have studied long-term trend of annual and seasonal rainfall over different districts and meteorological sub-divisions of the country between 1901 and 2013. They have also carried out annual rainfall trend analysis between 1961 and 2013. A total of 632 districts and 34 meteorological sub-divisions were included in their study and daily rainfall records from 6,995 rain gauge stations across the country were collected. Andaman and Nicobar Islands, and Lakshadweep were excluded from the study. 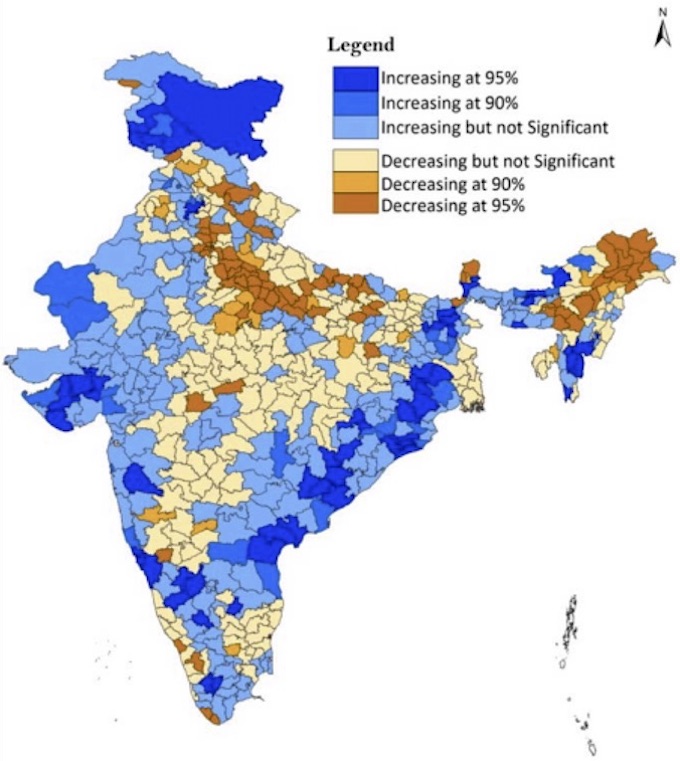 Also, no district is showing an increasing trend in rainfall in Uttar Pradesh, Uttarakhand, Delhi and Puducherry in both the periods. The IMD study also warns of “high variability in rainfall in the recent decades”.

The changing rainfall pattern in India is a huge concern as the country’s water and food security is at a risk. According to a 2017 document of the Indian government’s think tank NITI Aayog, Revitalising Rainfed Agriculture in India, India is already water stressed. Almost 52% of its cropped area remains without irrigation and some areas are chronically water stressed.

The share of canal in net irrigated area has declined from 39.8% to 23.6%, whereas groundwater sources has increased from 28.7% to 62.4% between 1950-51 and 2012-13. Because of lack of irrigation, a large number of farmers depended on monsoon rainfall to practice agriculture. For instance, as per the NITI Aayog document, of the total pulses, oilseeds and cotton produced in the country, 80% pulses, 73% oilseeds and 68% cotton come from rain-fed agriculture.

Meanwhile, the annual demand for cereals, pulses, edible oils, vegetables and fruits is rising a rate of 1.3%, 3%, 3.5%, 3.3% and 5%, respectively. The changing pattern of rainfall can put a spanner in India’s food security.

The authors of the IMD study warn: “Changes in climate over the Indian region, particularly during the SW monsoon, would have a significant impact on agricultural production, water resources management and overall economy of the country.” Such climatic changes would also mean an increase in extreme weather events, droughts and floods.

Take the case of northeast India, which is facing destructive floods. As of June 22, Manipur has a rainfall departure of minus 60% (classified as large deficient), but is facing fury of the floods. As against the normal rainfall of 315 mm, Assam has so far received only 254.1 mm rainfall this southwest monsoon (minus 19%, on the borderline of normal category), but 14 people have lost their lives in flash floods and rainfall-induced landslides, whereas more than half a million people in the state have been affected by the floods.

By Joydeep Gupta
The morning after the strongest cyclone ever to hit West Bengal shows tremendous destruction. There is still no news from much of Sundarbans
END_OF_DOCUMENT_TOKEN_TO_BE_REPLACED

By Joydeep Gupta,  Zobaidur Rahman Soeb
In West Bengal, evacuees and people quarantined for possible coronavirus infections are crammed inside the same buildings because there are no other shelters
END_OF_DOCUMENT_TOKEN_TO_BE_REPLACED

By Sharada Balasubramanian, Jency Samuel
Fisheries markets collapsed in the first days of the lockdown, impoverishing hundreds of thousands of small fishers in India, and recovery is nowhere in sight
END_OF_DOCUMENT_TOKEN_TO_BE_REPLACED

By Richa Singh
India’s second longest river is flowing clean in the lockdown forced by Covid-19. A grim reminder of how it was before could persuade us to keep it that way
END_OF_DOCUMENT_TOKEN_TO_BE_REPLACED

By Christopher Trisos, Alex Pigot
Rather than slowly sliding down a climate change slope, many ecosystems many fall off a cliff edge, negatively impacting the mostly poor people who depend on them
END_OF_DOCUMENT_TOKEN_TO_BE_REPLACED

By Joshua Stevens, Kasha Patel
Satellite data show that air pollution levels have dropped significantly over northern India since the country enforced a nationwide lockdown to control the spread of coronavirus
END_OF_DOCUMENT_TOKEN_TO_BE_REPLACED