Ice stupas not cutting ice with some farmers in Ladakh

Hailed as a climate-friendly innovation, the ice stupas of Ladakh are now being slammed by some downstream farmers for diverting water they could have used for farming and groundwater recharge 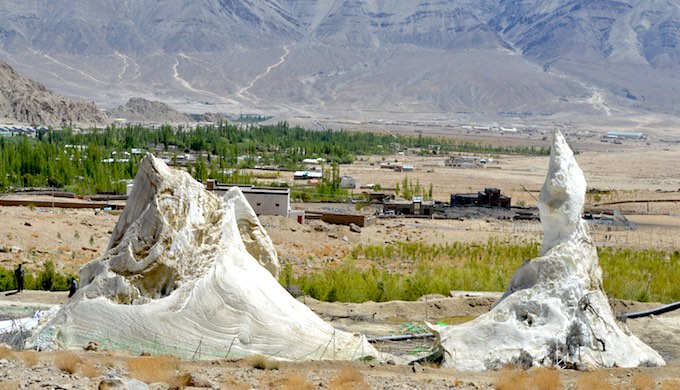 It is early June and the sun beats down harshly in the Ladakh Himalayas. Yet, the two giant artificial glaciers in the form of ice stupas, created by environmental engineer Sonam Wangchuk in the cold desert’s Phyang village, still stand tall and pull through the sunny weather. The ice stupas suffice for water needs in spring as mountain glaciers start yielding melt water only from late July.

Getting close to the two ice stupas in Phyang makes one listen to the gently dropping melt water and the soft sound of the liquid coming down through a large pipe connected to a reservoir. The water is then taken to irrigate a large plantation area in the village. The greenery in the fields in the vicinity is due to the plantation carried out with the help of ice stupas.

Wangchuk shot into prominence by devising the concept of creating small artificial glaciers, or ice stupas, by freezing stream water during the winter vertically in the form of ice towers with heights ranging from 15 to 50 meters close to villages. His idea, he says, was inspired by the artificial glaciers (ice fields at heights of 4,000 m and above) created by his fellow Ladakhi engineer, 83-year-old Chewang Norphel.

“I kept thinking about an alternative solution and finally succeeded in storing water way down (in villages),” Wangchuk told indiaclimatedialogue.net. His innovation has not only earned him accolades within India, but globally as well. He was among the five people from across the globe who was given the Rolex Award in November 2016.

According to Wangchuk, the ice stupas need very little effort and investment and can be created for all the villages that need water for agriculture and other uses in early summer.

The ice stupas are formed using glacial stream water carried down from higher ground through buried pipes whose final section rises vertically. Due to the difference in height (gravity), Wangchuk explained, pressure builds up in the pipe and the water passes along the pipe, flows up and out from its raised tip through a fountain into sub-zero air and then freezes as it falls to gradually form an ice cone or stupa. In late spring the melt water is collected in large tanks and then fed onto planted land using a drip-irrigation system.

Being a cold desert, agriculture in Ladakh depends on snowmelt and glacier melt. When there is good snowfall in Ladakh’s mountains, it makes water available to farmers in the form of snow melt in early spring and later the glacier melt suffices their needs as the summer in the cold desert progresses.

But, in recent years, people in Ladakh have seen that very low or no snowfall has occurred during most winters. Wangchuk’s invention is seeking to resolve this same issue by making water available to farms in spring through artificial glaciers within villages.

But the farmers of the downstream Phey village say that the diversion of water for creating ice stupas in winter deprives them of storing water for their farms in winter, which also helps recharging the water table.

“They divert all the water of the stream (Phyang Nallah) from November for creating the ice stupas. This is quite dangerous for our farms,” Sonam Phunsuk of Phey village, who owns several acres of agricultural land, told indiaclimatedialogue.net. “Every year, we used to put that water in our farms and the wasteland around our village for recharging the groundwater and storing water for our use in spring. Diverting the water doesn’t allow us to do so.” 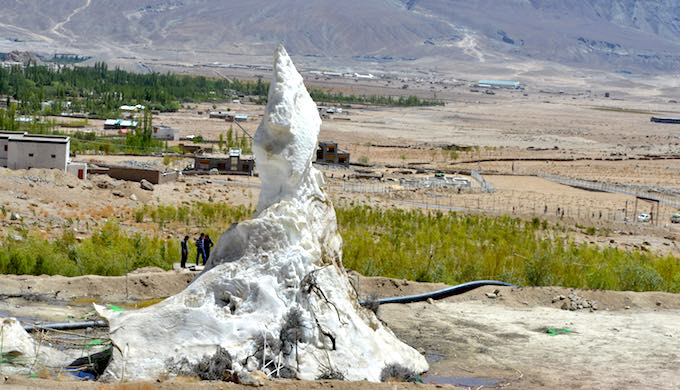 Tsering Motup, another farmer of the village, and many others repeated the same thing and added that they have vehemently opposed the diversion of water and have taken the matter to the Leh district administration.

“Since it is a new idea, the farmers downstream are afraid that it might hurt their interests. That is why they are opposing the ice stupas,” Wangchuk told indiaclimatedialogue.net. “Generally, it has been seen that new concepts meet resistance until the experts and the administration is able to clear the doubts on them.”

The district administration seems to be busy in finding a solution. “We had constituted a committee last year which came up with reports. On the basis of those reports, there was a consensus for some time. But recently, some differences over the issue of sharing water have again emerged. So, we will now constitute a committee of experts, which will include hydrologists, glaciologists, government officials and civil society members. We are hopeful that concerns of both the parties will be taken care of,” Sonam Chosjor, Assistant Commissioner Revenue of Leh district, told indiaclimatedialogue.net.

At the office of the deputy commissioner Leh, official documents show the dispute between Phey and Phyang villages over the use of water.

In response to written complaints of the village head of Phey village, Tsering Motup, the deputy commissioner of Leh, Anvy Lavasa, had directed through an order dated February 16 that “all the persons directly or indirectly involved with the diversion of water from Phyang Nallah for Ice Stupas shall desist from any act of water diversion.”

However, the villagers of Phyang, who support Wangchuk as their village is benefiting from swathes of green planation because of the water produced by the ice towers, have contended that they should be allowed to carry forward the “Go Green Project” with the help of the stupas.

Through a letter, Wangchuk has apprised the deputy commissioner that he has a plan of converting both Phey and Phyang villages into a green belt by storing water using ice stupas and reservoirs.

In the letter, he has further mentioned: “Moreover, bringing large-scale water to the desert of Phyang is the only way groundwater and spring sources of Phey village will be recharged. This is particularly important in the face of widespread bore-well drilling in the Phyang desert.”

It remains to be seen how the expert committee would respond to Wangchuk’s suggestions. However, most people in Ladakh say that they are proud of the way Wangchuk has come up with a wonderful innovation, which holds the promise of water security as well as additional tourism as many people visit the ice stupas. “What he is creating is nothing less than a marvel,” Tashi Angmo, a government official in the agriculture department, told indiaclimatedialogue.net.

Focus back on millions displaced by climate disasters

By Joydeep Gupta
The morning after the strongest cyclone ever to hit West Bengal shows tremendous destruction. There is still no news from much of Sundarbans
END_OF_DOCUMENT_TOKEN_TO_BE_REPLACED

By Joydeep Gupta,  Zobaidur Rahman Soeb
In West Bengal, evacuees and people quarantined for possible coronavirus infections are crammed inside the same buildings because there are no other shelters
END_OF_DOCUMENT_TOKEN_TO_BE_REPLACED

By Sharada Balasubramanian, Jency Samuel
Fisheries markets collapsed in the first days of the lockdown, impoverishing hundreds of thousands of small fishers in India, and recovery is nowhere in sight
END_OF_DOCUMENT_TOKEN_TO_BE_REPLACED

By Richa Singh
India’s second longest river is flowing clean in the lockdown forced by Covid-19. A grim reminder of how it was before could persuade us to keep it that way
END_OF_DOCUMENT_TOKEN_TO_BE_REPLACED

By Christopher Trisos, Alex Pigot
Rather than slowly sliding down a climate change slope, many ecosystems many fall off a cliff edge, negatively impacting the mostly poor people who depend on them
END_OF_DOCUMENT_TOKEN_TO_BE_REPLACED