Although India has gone ahead with its plans to install the first offshore wind park by inviting expressions of interest, industry experts said installing offshore capacity would not be easy 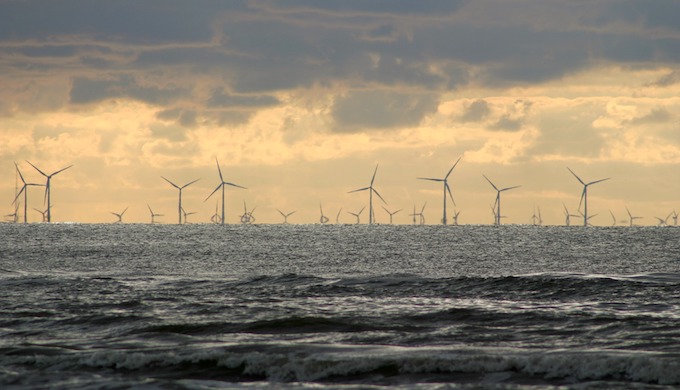 Renewable energy in India is set to get another boost as the country plans to install giant wind turbines in the sea. In its latest move, the Indian government has fixed ambitious targets to develop offshore wind energy, which is a first for the country.

The government recently announced medium- and long-term targets for offshore wind power capacity additions — 5 GW by 2022 and 30 GW by 2030. Apart from boosting India’s ambitions of increasing the portion of renewables in its energy mix, the initiative has also been taken to “give confidence to the wind industry,” according to a statement the Ministry of New and Renewable Energy (MNRE).

The ministry had recently invited Expressions of Interest (EoI) for the first 1 GW offshore wind project in India, which it said has evoked a “keen response” from both Indian and global firms.

The government had already notified its National Offshore Wind Energy Policy in October in 2015 to realise the offshore wind power potential in the country. Since then, preliminary studies have been conducted in two regions off the coasts of Gujarat in the west and Tamil Nadu in the east.

LiDAR, short for light detection and ranging, is an instrument to measure various parameters of wind such as speed, gust, etc. Another LiDAR has been installed by Suzlon Energy Ltd offshore Tamil Nadu.

Earlier, FOWIND released a feasibility study for offshore wind farm development in both Gujarat and Tamil Nadu that gave a concept design for demonstration projects ranging from 150MW to 504MW in the most promising wind-abundant area of the seas. In addition to this, the reports analysed 4, 6 and 10MW turbines, in terms of project cost and energy cost to help identify key project risks.

According to the government, preliminary studies have indicated good wind potential for offshore wind power both in southern tip of the Indian peninsula and the west coast. More surveys to study oceanographic and seabed conditions within the identified zones are now in the pipeline.

Offshore wind power is being seen as a new element to the already existing basket of renewable energy for the country. But MNRE has acknowledged that the road ahead is challenging.

“While this (offshore wind power targets) may look moderate in comparison to India’s onshore wind target of 60 GW and its achievement of 34 GW and solar target of 100 GW by 2022, this would still be challenging considering the difficulties in installing large wind power turbines in open seas,” it said in a media statement. “It may be mentioned that offshore wind turbines are of much larger dimensions and capacities than onshore turbines.”

Experts working in the renewable energy field have also given mixed views on the announcement of offshore wind energy goals. The Council on Energy, Environment and Water (CEEW), a New Delhi-based think tank, has welcomed the move, but indicated it could be too early to bank upon it.

“The recently announced offshore wind targets are a signal of the government’s continued commitment to renewable energy. Expanding the sources of clean energy generation will become increasingly important as the share of renewables in the electricity mix increases,” Kanika Chawla, Senior Programme Lead, CEEW, told indiaclimatedialogue.net.

However, she added, “The government must have detailed implementation plans backing big announcements. India is yet to commission any offshore wind energy. While interest in the first 1 GW offshore wind project off the coast of Gujarat has been significant, there is yet to be any bid or even pre-bid activity. It might have been more prudent to take lessons from the 1 GW proposed project, and ascertain the feasibility of the prices bid by market players, before making any large announcement.”

Srinivas Krishnaswamy, CEO of Vasudha Foundation, a non-profit working in the area of green energy, reminded that even if the project seems feasible on paper, the situation might be different on ground.

“The technology may have potential but I am not sure if the ground situation and technicalities may have been studied properly. For example, the marked area at the southern coast is very close to Adam’s Bridge, which is ecologically fragile. It is also a prime fishing area. I am not sure if they have exercised precautions when it comes to fishing rights or if the rights of the local communities have been accounted for,” Krishnaswamy told indiaclimatedialogue.net. “A project like this requires big infrastructure, underwater cabling and transmission infrastructure. We don’t know if environment impact assessments have been done.”

According to S.P. Gon Chaudhuri, an expert on renewable energy, the commercial viability of offshore wind energy projects is doubtful, especially with the solar power being cheaper and user-friendly. “Offshore wind in our country is really expensive. Because solar power has come, offshore won’t be able to complete,” Chaudhuri told indiaclimatedialogue.net. “As a demonstration India should do it, but financially it is not a viable option yet.”

“First of all, we don’t have the technology and we will have to import it. With solar prices touching INR 2.65 (4 US cents), it is easier to get investors for solar. Chinese manufacturers are aiming for cheaper solar panels in the market and wind power won’t be able to catch up that easily,” he explained. “If solar prices don’t get reduced significantly, then there is still a chance for offshore wind. The government has announced the targets, but the projects can take place only through private investment, and it will depend entirely on solar power cost.”

Globally, about 17GW offshore wind power have been installed by countries such as the UK, Germany, Denmark, the Netherlands and China. Some of these markets have also witnessed fall in offshore wind tariffs. While for India, installing offshore wind project would be a feather in its cap, but it would be challenging to ensure commercial viability of the technology, at least in the near future.

By Soumya Sarkar
In a promising outlook for light mobility, penetration of electric 3-wheelers in India may rise up to 75% by 2030, followed by 2-wheelers at 35%
END_OF_DOCUMENT_TOKEN_TO_BE_REPLACED

By Soumya Sarkar
Renewable power is surging despite the Covid-19 crisis and is on track to become the largest source of electricity by 2025, ending the dominance of coal
END_OF_DOCUMENT_TOKEN_TO_BE_REPLACED

By Anjali Notandas
Concerned about the dangers of climate change and environmental degradation, children in India have taken to activism, demanding their rights to a better future
END_OF_DOCUMENT_TOKEN_TO_BE_REPLACED

Pandemic chance to correct course on climate and health

By Omair Ahmad
Covid-19 has created an opportunity for policymakers to work together on health and climate change if temperature increase has to stay below 1.5 degrees Celsius
END_OF_DOCUMENT_TOKEN_TO_BE_REPLACED
Share This