Impacted by climate change and human activity, hope for the Similipal biosphere reserve in the eastern state of Odisha has come from protection offered by area residents

Standing in the backyard garden of his thatched house near the core area of the Similipal national park, Shyam Ho (50) of Kusumi village recalled his childhood when the forest around his village was thick and the primary source of food for his tribal community.

“We used to get everything, from tubers to leafy vegetables and a variety of fruits and berries, in the forest. Honey was abundant available in the hedges, the mud walls of our houses, and in the nearby forest. They all have become rare these days,” Shyam Ho said. “Today, we have to buy honey from collectors whenever we need it even for medicinal use. We don’t see so many varieties of honeybees around our villages these days.”

Although the forest is no longer bountiful, the impoverished people living around it have been spared from the spectre of acute hunger through a welfare scheme of the Odisha government that provides them rice, a local staple, at INR 1 (1.5 US cents) per kg, said Makara Ho (35) of Gudugudia, another village within the forest limits.

“With the pattern of rain becoming erratic and scarce most of the years, growing food through agriculture has become a risky affair,” Makara Ho told indiaclimatedialogue.net. Droughts have become more frequent in recent years, agreed Laxman Ho, a friend of Makara.

It is becoming increasingly clear that the Simplipal biosphere reserve, a treasure of flora and fauna, and an important factor in regulating the local climate of Odisha, is facing the brunt of climate change.

Famous in this part of the world as a habitat of big cats and elephants, among a variety of other mammals, birds and reptiles, Similipal is a thickly forested hill range in Odisha’s northern most district of Mayurbhanj. Its name is derived from the simul (silk cotton) tree and the hill range is referred to in Odia literature as Salmali Shaila (Hill of Simul) by eminent authors.

“At present, one can hardly find a simul tree in this forest,” said Arjun Mahakud, a forest guard at Chahala in the Similipal Tiger Reserve (STR). “Phanphania (Oroxylum Indicum or the Damocles tree), among one or two other species, which were common to this forest during our childhood, are almost extinct now.”

Sal (Shorea robusta) being the dominating tree, Similipal Biosphere Reserve (SBR) is a treasure house of 1,076 species of plants from 102 families and 96 registered species of orchids. “We have identified 94 orchid species but most of them have become rare,” Dharmeswar Naik, a worker at the Orchidarium in Karanjia division of STR, told indiaclimatedialogue.net. “Vanda Tessellata (Grey Orchid) is becoming rare and the endemic Dendrobium Regium, called the Queen of Similipal, is shifting to north Similipal, where atmospheric temperature is relatively lower.”

A threatened species in the IUCN Red list, the decline of Vanda Tesselata has been attributed to changing environmental conditions, habitat loss and degradation.

Climate change has not only impacted orchids. “The other endemic plant species, Piasala, or the Indian Kino (Pterocarpus marsupium) is under attack from new diseases,” Arjun Mahakud added.

Defining the climate in Similipal as wet tropical monsoon, Faunal Resources of Similipal Biosphere Reserve of Zoological Survey of India, Kolkata, notes, “The cyclones from the Bay of Bengal bring copious rains during July to October from low pressure at Bay of Bengal, which passes over north Balasore and strikes at Similipal Meghasan range. If the range were absent, then Odisha would have been a desert tract like Rajasthan,” the report says.

Rainfall data of the past five years (2013-17) for Mayurbhanj district shows a declining trend. Rainfall trend analysis for Mayurbhanj, done by scientists of Keonjhar-based regional research station of Orissa University of Agriculture and Technology, concludes: “Any year receiving rainfall less than or equal to 1,609.14 mm will be drought year.” The annual rainfall in the years 2015, 2016 and 2017 being 1,332.4, 1,424.6 and 1,504.1 mm, respectively, the host district of Similipal forest has faced drought for three straight years.

“The precipitation behaviour in recent years reflects the rising trend of less precipitation and is expected to receive 70 cm (700 mm) average precipitation by the middle of next century,” cautions Faunal Resources of Similipal Biosphere Reserve of Zoological Survey of India, Kolkata.

An analysis of temperature data in the winter months of January and summer month of May over a period of 20 years (1995-2015) shows that Mayurbhanj district, the climate of which is completely influenced by Similipal, is slowly marching towards extreme temperature conditions.

“Though this is not yet an alarming change, it indicates more extreme temperature conditions in the future if no precaution measure is taken immediately,” Yugal Kishore Mohanta, a microbiology research scholar at Baripada-based North Odisha University, told indiaclimatedialogue.net. “Such conditions may badly impact the rainfall pattern and alter the ecosystem.”

“Warmer temperatures lead to increased water losses from evaporation and evapotranspiration and can also result in reduced water use efficiency of plants,” Says a the United Nation Food and Agriculture Organisation (FAO) report on climate change impact on forest health. “Longer, warmer growing seasons can intensify these effects resulting in severe moisture stress and drought.”

Being the major food source for its human population and hunting ground for the local rulers, Similipal forest has been facing anthropogenic pressure since centuries.

Timber harvest to earn revenue was a practice during the British colonial rule. In the northwest region of Similipal, Badampahar remained a deforestation hotspot for years due to mining activities. With agriculture promoted among tribal communities to minimise pressure on the forest, deforestation took place to convert forestland into farmland. The southern part of Similipal witnessed large-scale deforestation for agriculture. 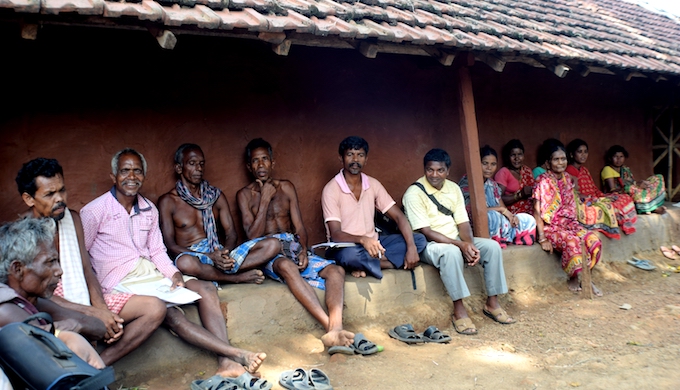 “After relocation of villages in the core area of STR in the name of tiger protection and forest conservation, forest around those deserted villages are being wiped out to raise grassland,” Maheswar Nayak (61) of Balipaka, a village in the buffer zone of Similipal, told indiaclimatedialogue.net.

“Such grasslands are being raised under meadow development scheme” implemented by the STR authorities, villagers said. The objective of the scheme is to maintain the existing meadows and improve those that have shrunk.

The buffer and core zones of Similipal have been emitting more carbonaceous gases than the transition zone, the study found.

“Warmer climate means more fires, and more fires mean more greenhouse gases,” cautioned Odisha’s State Climate Change Action Plan, while suggesting necessary actions to evaluate the long-term effects of climate change on forests and determine what to do to respond to this threat.

The Forest Right Act (FRA) of 2006 has recognised the rights of tribal and other communities traditionally living in Similipal sanctuary and empowered them with community forest rights to protect the forest and its critical resources — wildlife and biodiversity — within their respective dwelling areas. So far, community rights over forest resources of people living in 44 villages in Similipal have been recognised.

“We are entitled with community forest right (CFR) over 3,000 acre of forest in the buffer zone of Similipal sanctuary since 2015. During the last three years, sal and other local trees have regrown. We not only guard this forest from poaching activities but also allow it to rejuvenate to fulfil our food and livelihood demands,” Maheswar Naik, president of the Forest Right Committee of Balipaka village, told indiaclimatedialogue.net.

According to villagers, they have collected a good amount of honey and fruits this year from the forest under their protection.

“These tribal people are worshippers of trees, forest and the nature. The heritage trees and sacred grooves, which are more than 300 years old, are testimony to this. They only were to be taken into confidence and entrusted with responsibilities to protect and conserve forest resources, and promote sustainable use of it in their communities,” said Bijaylal Mohanta of Jashipur-based non-profit Centre for Regional Education, Forest and Tourism Development Agency (CREFTDA), which helps tribal communities in filing community right claims, forming FRCs and functioning as per FRA guidelines.

The scenario is now changing. “As communities are protecting forest in the buffer area, human interference in the core area has drastically come down,” said Arjun Mahakud, the forest guard at Chahala in STR.

With community engagement in conservation activities, green cover is spreading over the barren edges of southern Similipal, raising hope about rejuvenation of the degraded forest to face and mitigate the challenges of climate change.

By Shally Seth Mohile
Weak consumer appetite, lack of charging infrastructure and a high payback period is holding back adoption of electric cars for personal use in India
END_OF_DOCUMENT_TOKEN_TO_BE_REPLACED

By Soumya Sarkar
In a promising outlook for light mobility, penetration of electric 3-wheelers in India may rise up to 75% by 2030, followed by 2-wheelers at 35%
END_OF_DOCUMENT_TOKEN_TO_BE_REPLACED

By Soumya Sarkar
Renewable power is surging despite the Covid-19 crisis and is on track to become the largest source of electricity by 2025, ending the dominance of coal
END_OF_DOCUMENT_TOKEN_TO_BE_REPLACED

By Anjali Notandas
Concerned about the dangers of climate change and environmental degradation, children in India have taken to activism, demanding their rights to a better future
END_OF_DOCUMENT_TOKEN_TO_BE_REPLACED

By Soumya Sarkar
The rapid warming of the Indian Ocean due to climate change is leading to more cyclones pummelling South Asia, as storms gather more quickly and become more intense
END_OF_DOCUMENT_TOKEN_TO_BE_REPLACED

By Soumya Sarkar
The locust swarms that destroyed farmlands in western and northern India are linked to the warming of the Indian Ocean. Such proliferation is more likely as rainfall patterns change
END_OF_DOCUMENT_TOKEN_TO_BE_REPLACED