The recently announced national policy on biofuels is another step towards producing clean energy in India. It also has the additional benefit of boosting farm incomes 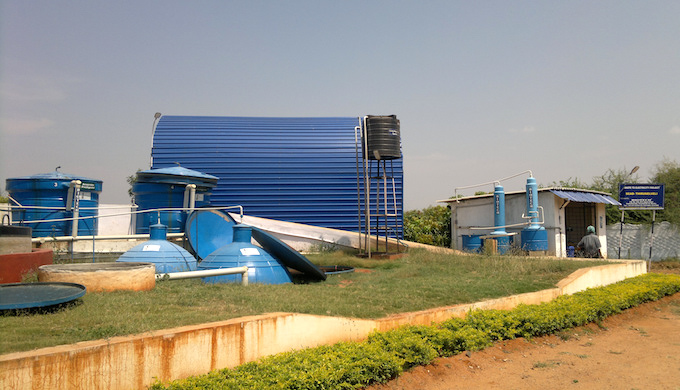 An industrial-scale biofuel plant in India (Photo by Flickr)

In an effort to reduce its dependence on imported oil and gas, the Indian government in May approved a national biofuels policy that allows ethanol production from damaged farm produce and other starch-containing materials such as corn, cassava and sugarcane.

The approval by the cabinet of ministers of the National Policy on Biofuels on May 16 has evoked an encouraging response from industry experts. The policy takes a series of positive steps to drive the biofuel sector forward, they said. It would also go a long way to boost earnings of farmers, who have been facing a crisis in recent times.

“Farmers will be encouraged to grow a variety of different biomass as well as oil seeds on their marginal lands, as inter-crop and as second crop wherever only one crop is raised by them under rain fed conditions,” the policy noted.

At the same time, it is important to enable the creation of facilities for the biofuel sector to develop, according to Charmaine Fernandes Sharma, co-founder and partner of Observing I Ecotech, a green technology company. “This involves development and implementation of new technologies, enabling and encouraging entrepreneurship in these sectors, removing the blocks in prevailing purchase systems and facilitating marketing of these biofuels,” she told indiaclimatedialogue.net. “If the marketing and distribution is made easier, a number of large industries will enter this field, which will result in the growth of the sector and, ultimately, the increased use of green fuels.”

The essence of the policy is to do everything in India, explained Sandeep Chaturvedi, president, Biodiesel Association of India, an industry lobby group. “If everything goes through as per this policy, most of the pollution-related problems in Delhi would be a thing of the past,” Chaturvedi said. “This is because what we are aiming at is the entire agricultural residue that is being burnt would be converted into 2G ethanol.”

Industry insiders also predict a sizeable production of biomass pellets to emerge due to the policy intervention, along with the technology to produce the pellets at a low cost. The state-aided agriculture research centres should take a lead in this, Fernandes Sharma said.

Bio pellets are an excellent idea, says Ray. “A large amount of biomass stubble is anyway being burned by farmers, especially in some north Indian states, to clear the field and sow the next crop. Biomass pellets also reduce the lifecycle carbon dioxide emissions and toxic sulphur oxides emissions when co-fired with coal,” he told indiaclimatedialogue.net. “Suitably selected, they can also be beneficial to reduction of fly ash from coal-fired boilers.”

On issues such as waste agricultural produce from states like Punjab being used to convert it into biofuel instead of burning it, Ray says that several new technological possibilities have emerged from conversion of crop stubble into biofuels. “At CSIR-Indian Institute of Petroleum, in collaboration with the European Bioenergy Research Institute of Aston University, UK, we expect to launch the Pyroformer, a truck-mounted machine that will travel to the farmer’s field and convert the stubble into a fuel useful locally for brick kilns, lime kilns and small industrial furnaces, or for collection at a central point to partially substitute crude oil requirements of petroleum refineries.”

Fernandes Sharma suggests that it is not advisable to extract the stubble by mechanical methods since it would release soil carbon into the atmosphere. Other traditional methods of using the stubble to create compost have to be revisited and adopted in other to treat the problem of crop stubble, she said.

Up until now, the biofuels programme in India was largely impacted due to non-availability of domestic feedstock for biofuel production. On whether this policy will help address this issue, Ray believes that the policy document dwells on the development of the next generation biofuel conversion technologies based on new feedstock and promote domestically available feedstock exploring, utilising the country’s biodiversity. “It will be important to create sustainable support mechanisms for investors in feedstock development, as the US, the European Union, China and Brazil have shown,” he said.

Fernandes Sharma said there is considerable feedstock for production of biofuels from secondary resources of other industries. “These have to be assessed, tested and quantities ascertained, but there is no agency undertaking such methodical assessment studies,” she told indiaclimatedialogue.net. “There is a huge potential for farmers to grow feedstock yielding biofuels in the periphery of their farms and thereby have a secondary source of income.”

Ray said reducing oil imports is a priority area for the policy. India imported about 220 million tonnes of crude oil in the last fiscal year. “Quite a bit of the agricultural waste in India is burned in the field and causes significant air pollution,” he pointed out. “It can provide over half of our carbon requirement if properly harnessed and converted to alternative fuels.”

“It is not at all unreasonable to set a policy target of 10% reduction in crude oil imports,” he said. “Ethanol blending from first-generation sugarcane-based ethanol has seen some success in recent years and is poised to achieve 5% average blending levels in the petrol pool on a nationwide basis.”

On the biodiesel front, the policy depends mainly on the collection of used cooking oil. Currently, used cooking oil is a banned item which nobody can buy, sell or trade. This ban must go, Chaturvedi suggested. “The Directorate General of Foreign Trade will have to amend the Used Cooking Oils classification so that it becomes a freely traded commodity with an end-use verification,” he said. However, Ray said cooking oil should not be reused in cooking since toxic and cancer-causing components develop with repeated reuse.

Unlike solar and wind energy that have a sizeable contribution towards India’s target of 175 GW, biomass, in comparison, has just 10GW. “It will be a relatively small contributor to the power scenario, though it has potential to replace at least the fossil fuel being used in diesel generators and pumps,” Ray said. “The major orientation of the policy is towards transportation fuels. Given that a large component of our crude oil imports is driven by demand for diesel and petrol, as also jet fuel and cooking gas, the approach of the new biofuels policy towards replacing these with a wide, technology-neutral suite of alternative fuels appears both rational and realistic.”

However, proper implementation is crucial, he said. Supply-side aspects, including blending and handling infrastructure for a more complex future suite of fuel options, and issues on the demand side from the automotive sector, railways, tractor, heavy machinery producers and telecom tower companies must be taken into account and addressed consultatively, he said.

A policy is essentially a resolution and not a solution, averred Fernandes Sharma. Therefore, while the biofuels policy points out a direction, solutions have to emerge from entrepreneurial activity, from government advisories to farmers, and from assistance in advice on multi-cropping, she said.