Rampant encroachment and filling up of water bodies across Bihar are stymieing efforts at rainwater harvesting and floodwater management, making the province vulnerable to climate shocks 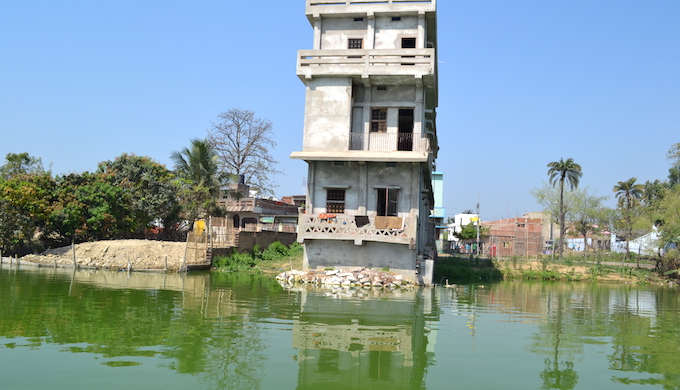 At a time when there’s a focus on conserving and creating more water bodies for rainwater harvesting and climate resilience across India, many ponds in the eastern province of Bihar are disappearing, and others are being encroached upon or filled with waste.

Thousands of ponds — essential to store rainwater during the eight dry months of the year — have disappeared across Bihar in the past two decades due to government apathy and increasing real estate activity. Till the early 1990s, there were 250,000 ponds in Bihar, official records show. Locally known as talaab or pokhar, the number of these water bodies has declined to a little over 93,000 today, a slump of more than 70%.

Ponds have become victims of increasing human neglect and for vested interests to gain something if they dry up or are filled, according to Ranjeev, an activist working for over three decades for the conservation of water bodies in the flood-prone Koshi and Mithilanchal regions. “In the last two decades, we have filled ponds with waste, soil and other things, and they have died,” he told indiaclimatedialogue.net. “This is set to hit natural water harvesting during the monsoon, its ability to easily recharge groundwater and provide water security.”

Even according to official records, 12,027 water bodies (including ponds) out of 199,000 have been encroached upon. This was revealed in May last year after the Patna High Court pulled up the state government in this regard.

The government had in 2016 launched a campaign to free water bodies of encroachments to help rainwater harvesting and groundwater recharge that would help tide over droughts, floods and recurring drinking water crises in the state. This drive was part of the much-hyped Disaster Risk Reduction Roadmap 2015-2030 of Bihar, which mandates action for water conservation by concerned agencies. It was then claimed that water body conservation will focus on removing encroachment from ponds, lakes, canals, ahar and pynes (traditional water harvesting systems), drains, water drainage channels and rivers.

“Bihar has been facing drought and drinking water crisis owing to the irregular and scarce rainfall over the past few years,” Vyas Ji, Vice Chairman of Bihar State Disaster Management Authority (BSDMA), told indiaclimatedialogue.net. “The main purpose of the campaign is to store rainwater and conserve groundwater to tackle such conditions.”

However, the ground reality hasn’t changed much. Hundreds of ponds have disappeared in Patna, Gaya, Darbhanga, Motihari, Muzaffarpur, and Bhagalpur districts in recent years, and many others are encroached upon.

Narayan Choudhary, convenor of Talaab Bachao Abhiyan (Save Lakes Campaign) in Darbhanga district, said it is difficult to save a pond due to direct involvement of powerful and influential persons and apathy of the local administration. “I have been fighting for years to protect ponds, conserve them and to free them from encroachment. But the fact is that I have not able to save a single pond so far,” says Choudhary, who has been on forefront to save ponds in Darbhanga, once known as the land of talaabs.

There were 350 ponds in Darbhanga town till 1960 as per the district gazetteer, but the number went down to 250 by the early 1990s, he told indiaclimatedialogue.net. Now, there are less than 100 ponds, as per the records of Darbhanga municipality, he said.

“It is a nexus of powerful people who have been encroaching and filling ponds in full public view without any problem,” Choudhary said. “Ponds are being destroyed in a very well planned manner. Ponds are part of public utility that is directly connected with environment and ecology. It is a criminal act to fill ponds.”

Chandra Shekhar Singh, the District Magistrate of Darbhanga, said the administration has begun a process to free ponds from encroachment. “Yes, ponds have been encroached upon but the process is underway to free them from encroachment,” he told indiaclimatedialogue.net, adding that the administration would act against encroachers of water bodies as per the government’s commitment for their conservation.

Choudhary says that a large number of water bodies have been converted into homestead and commercial land, mostly illegally. Others have been turned into dumping grounds for municipal garbage, medical waste and reservoirs for sewage, leading to serious pollution of surface water and groundwater. “The courts have repeatedly directed removal of encroachment from ponds,” he added.

In the name of development

“Ponds have become victims of people’s greed. In the name of development and beautification, they have been encroached upon and filled. That naturally led to their deaths. All this is going on in full knowledge of the concerned government departments,” said Ravinder Pathak, founder of Magadh Jal Jamaat, a network of activists working to save water bodies and revive the neglected traditional water harvesting and irrigation system in drought-prone Magadh region that comprises Gaya, Aurangabad, Jehanabad, Arwal and Nawada districts of southern Bihar.

He pointed to the case of Bodh Gaya’s Maya Sarovar that was once spread over seven hectares, but was filled up in 2003-04 and turned into Maya Sarovar Udyan (park). What is now left of this big lake is a small pond, he said.

This is not an isolated case. Several lakes and ponds were filled and levelled in the name of beautification in and around Gaya. In Gaya town, Magadh divisional commissioner’s office was constructed by filling in Dighi Talaab. “It is in violation of the government’s directive to revive all water bodies after removal of encroachment,” Pathak told indiaclimatedialogue.net. The government itself (district administration) allegedly used pond land for the construction of office buildings, schools and other things.”

Gaya has been facing a water crisis for long. Dozens of lakes were dug in colonial times to combat the scarcity but they are now rapidly vanishing. Ram Sagar Talaab in the heart of Gaya town was encroached upon and filled in 2010-11 to transform it into prime real estate. Another pond, Kathokar Talaab, was filled and levelled and a market was constructed there by Gaya Municipal Corporation. “It is not only in Gaya,” alleged Pathak. “Similar work has been done in other cities as well.”

However, the local administration denies any encroachment. “I don’t have any such information. Right now all water bodies are free of encroachment,” Gaya District Magistrate Abhisek Singh told indiaclimatedialogue.net. He said the administration would not allow anyone to encroach upon any water body.

“In Gaya town, half of the ponds have disappeared,” Pathak said. “There were more than two dozen ponds but now there a little over one dozen exist.”

Ranjeev said ponds have been playing an important role in floodwater management for centuries. In times of drought, these ponds used to solve the drinking water crisis in Mithilanchal. “North Bihar have had a rich tradition of ponds,” he said. “They have played a flood-moderating role by storing excess flow during monsoons and provided water security. In Darbhanga, ponds were inter-connected.”

“Ponds were an ecological bank and lifeline for the local people. The government had taken over most of ponds but different agencies responsible for maintaining them hardly work for conservation. For government departments, ponds have become source of collecting revenue, issue tender for fishing and all that,” Ranjeev told indiaclimatedialogue.net. “The government departments are interested in revenue collection only and they are not doing anything to save the talaabs.”

Ranjeev said nearly 500 water bodies, including 50 talaabs in Bhagalpur, have dried up in the recent past. Similarly, there are 2,146 water bodies in Banka district, of which 117 have dried up.

“A large part of Bihar is facing an acute drinking and irrigation water scarcity. As per Met department record, the state has been receiving less rainfall compared to the last decade. As ponds disappear, the people are forced to depend on deep bore wells, resulting in declining groundwater levels,” Ranjeev said.

He said that even in state capital Patna, hundreds of ponds have disappeared. The Patna branch of All India Institute of Medical Sciences was constructed after filling in 35 acres of lakes, he said. Similarly, many parks have come up after filling lakes and ponds. “There were nearly 1,000 lakes in Patna but their numbers have come down to a little over 200. Several residential localities have been developed after big ponds were filled,” he told indiaclimatedialogue.net.

Some of Patna’s ponds, including Kachchi Talaab, Sachivalay Talaab, Manikchand Talaab and Adalatgannj Talaab, are facing difficult times and may not survive for long, according to Ranjeev.

Bihar Pollution Control Board Chairman A.K. Ghosh said there would be a drinking water crisis in Patna by 2030 because the sources of groundwater recharge have been covered with concrete. “There is an urgent need to save water bodies, including ponds, and the stress should be on recharging groundwater,” Ghosh told indiaclimatedialogue.net.