A project to introduce and upscale climate-resilient livelihood strategies in the Sundarbans has failed due to the disconnect between local communities, researchers and policymakers

When researchers involved Gauri Mondal, a woman farmer in the Indian Sundarbans, as a participant in a project to evolve adaptive strategies to counter the impact of climate change in the world’s largest estuarine mangrove forest, she had little idea what it was all about.

By the third year of the study, Mondal’s income had risen to INR 40,000 (USD 550) a year by rearing poultry and adopting many other farming practices recommended by the researchers. “At that time, we used to rear 50 ducks and 50 poultry at a time, besides much else, with project support,” the 33-year-old subsistence farmer told indiaclimatedialogue.net.

The good days, however, did not last. Once the project got over, she found that the costs of maintaining the newly taught practices were not sustainable. “I had to scale down the work,” she recounted. “During the project, we received focused training from the experts. But after the project was over, neither the research team nor the Sundarban Development Board came back to us for any follow-up.”

Such tales of hope and despair abound in the world heritage site of Sundarbans, which is already reeling under the impacts of climate change in the form of more turbulent seas, increasingly saline soil and violent cyclones. The Sundarbans is the world’s largest contiguous mangrove forest and one of the most highly modified estuaries in the world. It has attracted a steady stream of researchers from home and abroad, but the outcomes and findings have often not been appropriately communicated to the subjects of the research or to policymakers.

Fish production the Sundarbans is a case in point. In 2010-11, the Sundarbans produced nearly 40% of the combined fish catch in the inland sector of the North and South 24 Parganas districts of the state of West Bengal. Freshwater aquaculture, a significant driver of the local economy, is clearly threatened, and experts say the vulnerability of fishery-based livelihoods to climate change has increased over time.

In 2013, India ranked third in the Global Climate Risk Index, a ranking of 170 countries that are most vulnerable to climate change, behind the Philippines and Cambodia. Anthropogenic activities, together with climate variability, pose a serious threat to the biotic and abiotic integrity of the Sundarban delta.

One of many research projects — Development of Climate Resilient Aquaculture Strategies for Sagar and Basanti Blocks of Indian Sundarban — was conducted by the West Bengal University of Animal and Fisheries Sciences (WBUAFS) between 2010-11 and 2014-15. Besides the university, which is an institution affiliated to the Indian Council of Agricultural Research (ICAR), other stakeholders included the Sundarban Development Board, West Bengal’s Department of Fisheries and Sundarban-based NGOs such as Paribesh Unnayan Parishad and Joygopalpur Gram Bikash Kendra and fish farmers of the surveyed area.

The project aimed to develop climate-resilient aquaculture strategies for freshwater aquaculture against climate change induced salinity intrusion in the Sagar and Basanti administrative blocks, which fall under the high aquatic saline zone and are often exposed to climatic hazards. Both the blocks suffered heavily during Cyclone Aila in 2009.

When a survey report was published as the first official output of the project in 2012, S. Ayyappan, Secretary General of ICAR, expressed hope that “the benchmark survey… could prove useful in making policy and planning for the future aquaculture development programme for the Sundarban region.”

After interactions with farmers, the researchers thought it was best to integrate aquaculture with livestock rearing and cropping. They tried out their model in the fields and ponds of farmers such as Mondal. The results were encouraging. The participatory mode research showed increased production and profitability, resulting in a 60% jump in farm cash incomes compared with pre-intervention levels. Better space utilisation, recycle of domestic waste, crop diversification and better manpower utilisation brought this turnaround.

The testing of solutions in the two blocks affected by Cyclone Aila in 2009 and by increasing climatic variability in subsequent years was done by the study team for a three-year period. Interventions in the farmers’ fields included raising of pond dyke heights and fencing of pond with nets, supply of various species of fish and partial supply of fish feed, supply of improved variety paddy seeds and other costs of paddy farming, supply of ducks, poultry, goats and their feed and building their dwelling places and supply of various salinity tolerant fruit trees and plants such as guava, mango, jackfruit, coconut etc.

The research team also evaluated salinity tolerance of 17 freshwater fish species convenient for saline aquaculture in the Sundarbans, which was thought to be useful for integrated climate-adaptive farming.

The findings were disseminated through stakeholders’ meetings and reports were made to the Sundarban Development Board (SDB) and other relevant stakeholders. However, the project’s recommendations were not widely adopted, and policymaking and planning for a future aquaculture development programme in the Sundarbans never materialised.

“Unfortunately, things have not moved,” Raman Kumar Trivedi, Principal Investigator of the project, told indiaclimatedialogue.net. This was despite the fact that the Sundarban Development Board was a partner in this project.

“Our process was elaborate and selection criteria included noticeable levels of vulnerability in the farmer, reasonable level of knowledge of aquaculture, technicalities of the surroundings of the ponds and presence of womenfolk who stood to benefit from the intervention, since women played an equal role in decision-making in the Aila-affected households. The board helped us in all this, giving us logistical support,” Trivedi said. “However, the next two stages — upscaling the solutions and policy-making interventions — was never in our hands.”

The availability of institutional credit is poor in the Sundarbans and the research report had recommended that this be strengthened to facilitate climate-resilient agriculture. During the project period, efforts towards capacity building of affected farmers and joining them up with locally situated government and non-government institutions was undertaken regularly. But it was not enough to ensure continuation of those activities or improvement in the credit scenario after the project period. 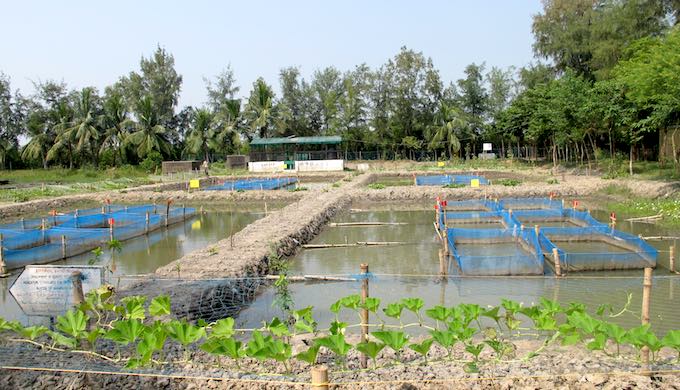 Aquaculture is practised widely across the Sundarbans (Photo by Dhruba Dasgupta)

Anindya Sundar Ghosh, former Deputy Project Director of SDB who was a key person during the implementation of the project, admitted the lack of follow-up. “SDB provided logistics support during the project period,” he told indiaclimatedialogue.net. “After dissemination meetings were held and results announced to us, no livelihood support programme was evolved by correlating project findings with follow-up action.”

The lack of policy intervention is only too evident in the Sundarbans. Although training has been imparted on climate-resilient aquaculture for the past two years, no other initiative is being carried out, admitted Abdul Gani, Special Secretary at the Sundarban Affairs Department. “We have no separate policy on climate-resilient aquaculture,” Gani said. “Policy formulations with respect to climate change are the responsibility of the climate cell of the Department of Environment.”

The state’s officer-in-charge of climate issues in the Department of Environment admitted the lack of policy communication. “With respect to the Sundarbans or aquaculture practiced there, no study findings or policy suggestions have come to us,” he said. “As a matter of practice, we incorporate any suggestion from any department of the state government into the State Action Plan on Climate Change, which is due to be updated and released soon.”

In terms of scaling up such interventions, the responsibility usually rests with institutions that look after fisheries extension work. Normally, Krishi Vigyan Kendras (KVKs), which are affiliated to the ICAR, as also Fisheries Extension Officers at the Department of Fisheries are supposed to carry out this task.

For this project, the best-situated institution to carry out this work was KVK Nimpith located in the Sundarbans. However, queries to the Subject Matter Specialist at KVK Nimpith, who was present at the stakeholder meetings during the project period, went unanswered, as he declined to comment on the findings of this study.

“In terms of extension work, KVK Nimpith showed a greater emphasis on agriculture and horticulture, and less of an orientation towards fisheries. They also had a limited area of operation,” Trivedi said. “Therefore, extension work related to the findings of our project has not been effective.”

Sourabh Kumar Dubey, who was Senior Research Fellow at the WBUAFS during this project period and is now with the International Water Association, summed up the situation. “The ultimate outcome is project findings stay under the carpet. The fish farmer, researcher and policymaker have a clear disconnect, which results in non-implementation of project recommendations. Effective action on the ground to tackle climate change and develop adaptive capacity of the farmers is the final casualty.”