As global warming becomes increasingly evident across India, the conservation of indigenous cattle breeds that are hardy and better suited to withstand high temperatures has been gaining ground 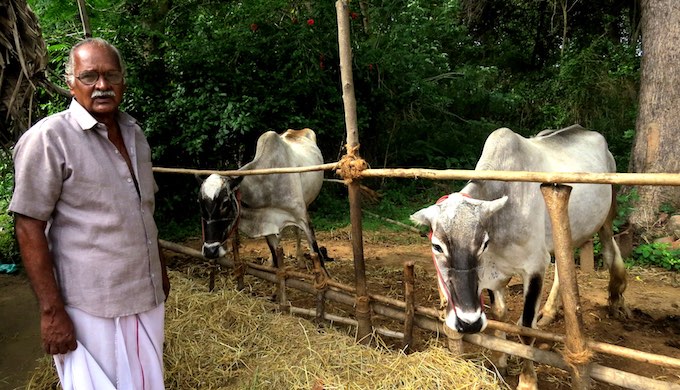 Umblachery, a native cattle breed reared by organic farmer Sethuraman, is ideal as a draught animal for the marshy rice fields of the Cauvery delta (Photo by Jency Samuel)

Bringing home the prizes his bull had won in a jallikattu event, Kaspar recollected last year’s protests. In January 2017, Tamil Nadu had erupted into protests to revoke a ban on jallikattu, a bull-taming sport.

The protests were an eye-opener for Kaspar from Pudukottai district since that is when he learnt about the importance of indigenous cattle breeds. Only indigenous breeds native to India are used in these sports, held in different forms in many states.

Each region of India has native breeds with distinct characteristics, suited to local conditions. Bargur is ideal as a draught animal for agriculture in the uneven, hilly terrains of western Tamil Nadu. Dual purpose Badri, used as milch and draught animal, is suited for the hilly regions of Uttarakhand. Kankrej is a dual-purpose breed of the tough terrains of Gujarat and Rajasthan.

India has 37 indigenous breeds, according to the Ministry of Agriculture. The other native breeds, lacking in distinct traits, are referred to as non-descript breeds. With signs of climate change clearly visible everywhere, conservation of native breeds that are hardy and better suited to withstand high temperatures has been gaining ground.

With farm mechanisation, the need for draught animals has decreased. Milk used for the cattle-owning family’s consumption has become a commercial product.

While the numbers may indicate a sizeable population of native breeds, statistics over the years show a decline. As per the 19th Livestock Census – 2012 report of Department of Animal Husbandry, Dairying & Fisheries, the percentage share of exotic and crossbred cattle has increased from 7% in 1992 to 21% in 2012. In the same two-decade period, the percentage share of indigenous cattle population decreased from 93% to 79%. Is the decline in native breeds a cause for concern?

As temperatures increase due to climate change, animals also feel the effect. Generally cattle suffer stress during summer, but imported breeds such as Jersey and Holstein-Friesian and hybrids such as Karan Swiss and Karan Fries developed from exotic breeds suffer more.

A research on the impact of heat stress on physiological, haematological and behavioural characteristics on native Tharparkar and hybrid Karan Fries carried out by National Dairy Research Institute (NDRI) in Karnal, Haryana, indicates the better adaptation capacity of native breeds.

While some parameters were the same for both, in many aspects such as restless behaviour and presence of carbon dioxide in blood with increase in temperature showed that Tharparkar fared better under increased heat.

Shanmugham, a small farmer who has both, said that native breeds withstand the summer heat better. “Though we try to keep them cool, hybrids pant and sometimes froth in the mouth.”

“Indigenous breeds have been here for thousands of years, so they are naturally more adapted to our climatic conditions,” N. Kumaravelu, professor at Tamil Nadu Veterinary and Animal Sciences University (TANUVAS), told indiaclimatedialogue.net.

As hybrids are bigger in size, the ratio of surface area to mass is lower, making it harder to cool them, needing more water essentially.

While the animals need more water when the temperature increases, the water availability also goes down, given the unpredictable rainfall pattern affected by climate change, making cattle management more difficult.

Hybrid cattle need specially formulated feed. According to Kumaravelu, a cow that yields 10 litres will need 4kg of feed, besides 30kg of grass. “Without a balanced special feed, yield of hybrids goes down,” K Vengadesan, a veterinarian, told indiaclimatedialogue.net. “For native breeds, even dry fodder will suffice, especially during drought conditions.”

“The milk yield generally decreases up to 25% in summer,” Ganesan, a native cattle breeder told indiaclimatedialogue.net. With increase in temperature, intake of feed and consequently milk production decreases, more so in hybrids.

Yield is one aspect where hybrids score over native breeds. “Hybrids give 25 litres per day, whereas natives give only about three litres,” said Sundaramurthy. 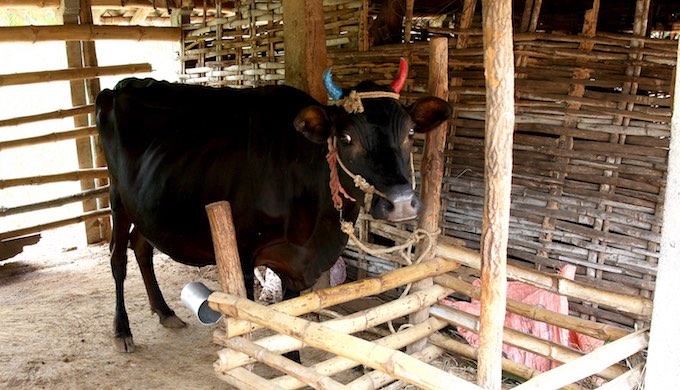 Hybrid cattle breeds need to be housed in cool sheds, as they cannot withstand high heat (Photo by R. Samuel)

Vengadesan, who conducted awareness campaigns about native breed conservation long before they caught public attention, said other factors such as quality of milk and number of calving ­— which is more than double for native breeds — should also be considered.

“Hybrid cows need more medication, vaccination and deworming to protect them against diseases,” said Kumaravelu. Studies have revealed that temperature variation decreases immunity of hybrids, making them more prone to diseases. As some of the diseases proving to be fatal came with the imported breeds, scientists point out that indigenous breeds have better resistance.

All the heat-related problems, including fertility, are exacerbated in hybrids. A study by NDRI predicted a loss of 3.2 million tonnes in annual milk yield and the impact could be abated with indigenous cattle.

A study conducted by TANUVAS and Trans-Disciplinary University showed the presence of antibiotics in excess of allowable limits. Scientists warn that this is a public health problem, as farmers give hybrids antibiotics regularly and most of the milk sold across the country is from hybrids.

According to Kumaravelu, indigenous breeds and hybrids with dominant native genes produce A2 milk that is better for human health.

Except one whose family consumes goat’s milk, the dairy farmers who spoke to indiaclimatedialogue.net said that they sell hybrids’ milk, but consume that of natives, citing health implications.

Many farmers are switching to organic farming and native crops as they find the same better suited to changing climate of increasing temperature and unpredictable rainfalls.

Organic farmers Sethuraman of Tamil Nadu and Prajwal Kandalkar of Maharashtra said that cattle are an integral part of organic farming. Many farmers claim that native breeds yield better results, with respect to pest control, soil health and hence yield. Prajwal who has 64 Gaolao cattle, gets about 40 tons of manure, enough for his farms and biogas plant.

“According to Tamil scriptures, 330 million gods reside in the cow,” Himakiran Anugula, an entrepreneur and organic farmer, told indiaclimatedialogue.net. “It actually refers to microbes in the cow’s dung and urine and beneficial for the soil and the crops.”

According to Anugula, jallikattu is a bio-cultural sport that helps in conservation of native breeds and should be encouraged. “If that sport is not there, there won’t be any need for that breed,” agreed Kumaravelu, citing the distress sale of Pulikulam breed around Madurai during jallikattu ban.

According to Vivekanandan of Sustainable Agriculture and Environment Voluntary Action (SEVA), allowing cattle keepers who have been rearing cattle for three generations to graze their cattle in the forest, as per the provisions in Forest Rights Act, 2006 would help conserve indigenous breeds.

“Now the forest department doesn’t give us pen passes to rest cattle in pens in the forest or grazing passes, citing felling of trees and poaching as reasons,” Ashoka Rajendra Swamigal of Dhronagiri Mutt that rears Bargur breed told indiaclimatedialogue.net.

Through selective breeding Ganesan has developed indigenous cattle with increased yield. “Gir and Red Sindhi would give up to 15 litres and Sahiwal up to 20 litres.” He has developed south Indian breeds that give six litres.

“Agriculture can be sustained only with the use of native cattle breeds,” Prajwal told indiaclimatedialogue.net. “If you weigh the pros and cons, surely native cow’s milk is better not only for us but also for the environment, especially with the threat of climate change,” said Kaspar, advocating the promotion of native breeds.