Photo feature: the waterman of Jharkhand

Simon Oraon Minj is a living legend in Jharkhand for his community driven initiatives to build wells, ponds and reservoirs that have transformed lives of thousands of villagers

Octogenarian Simon Oraon Minj, aka Pani Baba, lives a simple life. His community-based water conservation initiative changed 51 villages. In this photo, he stands in front of an open well from which a family member is drawing water (All photos by Indranil Bhowmik)

Winter afternoons carry a special magic in the Chhotanagpur Plateau in the eastern state of Jharkhand. The air is heavy with the fragrance of the sap from tall Sal trees. A search for Simon Oraon Minj, the waterman of Jharkhand, through thick groves and lush farmland, was proving to be difficult.

People failed to recognise the man by his name. But the moment he was referred to as the Pani Baba (water man), smiles broke out and the search became easier. On first meeting, Minj did not come across as a legend. Clad in a simple kurta and lungi, a yellow gamchha tied around his head like a turban, he was standing outside his house. The house was small and spoke of a spartan life. What stood out were the two open wells and a lovely kitchen garden.

Minj took us to one of the big water bodies that have changed the lives of thousands. It is a picturesque view, a huge man-made lake surrounded by rich soil, trees and lush rice fields. He narrated how he fought poverty and how just one initiative changed his life and that of others.

Simon Oraon Minj was born in a family of farmers at Khaksi Toli village in the Bero block, a 35 km drive from Ranchi, the erstwhile summer capital of undivided Bihar and now the capital of Jharkhand state.

In 1961, Minj started a community-based initiative to fight back against the water crisis with indigenous knowledge. For the residents of this often arid land, Minj is Pani Baba, a living legend. He was the driving force in building this huge man-made lake surrounded by rich soil, trees and lush rice fields

People in this region always depended either on forest resources or agriculture for a living. They found it tough to raise a crop because all the rainwater flowed away, down the slopes of the hills that dot this plateau. Drought, hunger and poverty forced young Minj to think out of the box. In 1961, he took up a project to fight the water crisis with the help of community support and indigenous know-how. The primary goal was to elevate the water table and transform wasteland and single-crop land into multi-crop land. The efforts failed twice. The earthen dam people built could not hold the water during the monsoon season.

On their third attempt, around 3,000 villagers worked day and night and used the Lantana (Putus Jhari) plant, paddy straw, clay, logs and stones to make the structure strong.

“It was like a war, with 3,000 people split into groups. While one group was cutting Putus Jhari, the next was rolling these into bundles. There were separate groups to work on logs, soil and stones. Those days we did not have electric lights. We used three Petromax lamps at night,” recollected Minj. “In nine days, we managed to build a 45 ft high dam. The villagers planted lots of trees to stop soil erosion.”

A view of Gaighat, once a dry wasteland that has now been transformed into lush farmland

“Food grain was collected to support the community during the emergency. Those who lost land for the dam released fish in the dam as an alternative source of livelihood. They were also compensated with paddy after the harvest,” he added.

Building the dam wasn’t easy since the government wanted it to be done in a different way. But the Pani Baba fought with the government engineer. “I told him that if he had a college certificate saying he was an engineer, then I was an engineer too. I took lessons from Mother Nature, soil and water. I know what was wrong and what was right. Finally, I won and was allowed to stretch the dam to connect two hills, which helped the project,” said Minj.

One of the water bodies at Gaighat that have changed many lives. Minj’s initiatives have created three dams, six ponds and 10 wells and transformed farming in at least 51 villages

Minj was elected chief of the tribes in 1964. Buoyed by the success of the community model, local people built two more dams, several lakes, deep wells and barrages that could stop flooding. Massive plantation projects were taken up and logging was banned.

Born in a simple peasant family, Simon was forced to drop out from school due to poverty. But his unique out-of-the-box thinking and great implementation transformed the area completely. He was elected as chief of the tribes in 1964

Minj was honoured with the Padma Shri by the Indian government in 2016 for his contribution to environment conservation and community development. 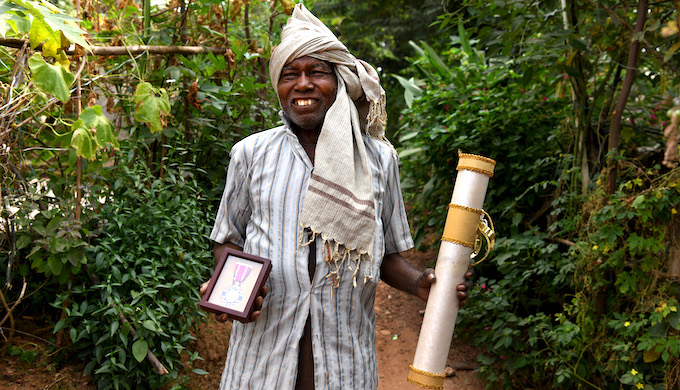 Even after winning one of the highest civilian awards of the country, Minj did not change his daily schedule. He still wakes up early and spends time in the fields and forests, collecting herbs that he uses to prepare Ayurvedic medicines.

Minj’s community-based initiative brings positive changes on many fronts. Easy availability of water has eased the lives of women in Gaighat

But Minj is worried about the future of his dream project because the groundwater level is going down every year. The octogenarian Pani Baba is convinced he knows the reasons.

Minj at the woodland near the reservoir at Gaighat

“People are driven by greed and they don’t think about others. Man is the protector of nature, not the destroyer. Why are we mindlessly using shallow pumps for farming? We need to axe all eucalyptus trees planted here in the name of afforestation. These trees drain out all the groundwater. We need old traditional trees, not eucalyptus,” he said. “The reservoirs, lakes and barrages need urgent conservation, not beautification.”

The jovial Pani Baba with fellow villagers in a small stream in the woodland near Gaighat dam. This rivulet is used to distribute water from the reservoir

Minj now spends most of his time preparing medicines, addressing seminars and holding workshops on community development and sustainability. He also makes it a point to meet farmers and teach them how to build check dams and start sustainable farming. Life, he says, is a mission that is never over.

By Anuj Xess
India’s decentralised renewable energy sector has become an enabler of economic growth, especially in rural areas, with a focus on livelihoods and income generation
END_OF_DOCUMENT_TOKEN_TO_BE_REPLACED

By Soumya Sarkar
In a promising outlook for light mobility, penetration of electric 3-wheelers in India may rise up to 75% by 2030, followed by 2-wheelers at 35%
END_OF_DOCUMENT_TOKEN_TO_BE_REPLACED

By Soumya Sarkar
Renewable power is surging despite the Covid-19 crisis and is on track to become the largest source of electricity by 2025, ending the dominance of coal
END_OF_DOCUMENT_TOKEN_TO_BE_REPLACED

By Soumya Sarkar
Solar power, which has now become the cheapest source of electricity, is expected to drive the global energy transition away from fossil fuels
END_OF_DOCUMENT_TOKEN_TO_BE_REPLACED