Torrential rains due to climate change may have led to the deluge, but the capital city of Bihar remained waterlogged for days due to corruption and failed urban planning

They found him stranded inside his waterlogged home. Dressed in shorts and slippers and with a few bags by his side, he was rescued along with his family members. The deputy chief minister of Bihar, Sushil Kumar Modi, looked embarrassed.

The incessant rainfall in the Indian state over the weekend of September 27 killed more than 30 people. It was the second time after 1975 that the downpour that lasted for barely 48 hours affected powerful politicians and policymakers. The residences of scores of ministers and bureaucrats still remain submerged in knee-deep water, even a week after the rainfall.

Maybe the most dramatic rescue was of Patna’s Member of Parliament, Ram Kripal Yadav, who was on the way to meet the waterlogged residents of Ramnibigha in Patna. The lawmaker was on board a makeshift boat made with bamboo and tyres, along with his supporters.

The rickety boat tilted, the MP during the course of his fall launched a tirade of expletives. Yadav later confessed to experiencing a near-death experience due to his inability to swim.

Heavy rainfall had been predicted

However the rainfall was not unexpected. The India Meteorological Department flashed a warning on September 27, predicting more than 21 mm of rain over the next 72 hours in 14 districts, including the state capital Patna. The government issued a red alert, closing educational institutions and dispatching rescue teams to various low lying areas.

The deluge, though, was much greater than expected. Around 177 mm of rainfall within 48 hours broke the decade-old record of 158 mm on September 3, 2013. (This was also the highest rainfall ever recorded for the month of September, at 429 mm, pipping the last record of 400 mm).

As water seeks its level, it gushed to the low lying areas of the city — Rajendra Nagar, Kankerbagh Colony and Patliputra Colony – dominated mostly by middle and high-income groups including influential ministers, bureaucrats and business persons.

Residents evacuating their supplies in Patna (Photo by Prashant Ravi)

Nearly 500,000 residents, including children and senior citizens, are still trapped inside their houses, wailing for milk and medicines. Most of these residents were getting ready to drown in the 10-day festivity of Durga Puja, starting September 28 to celebrate the victory of good over evil. The shopping bags were out, markets had upgraded their stocks and preparations for worshipping Goddess Durga were in full swing.

Giving a facelift to a corpse

Even after a week of the downpour situation continues to be alarming in the low-lying localities, exposing significant gaps in the city’s urban planning. “In Patna urbanisation is like giving a facelift to a corpse,” Santosh Kumar, a retired professor from Bihar College of Engineering, Patna told thethirdpole.net.

Unlike other cities that first plan effective drainage systems before approving the construction of roads, buildings and public infrastructures, he said, the government here does precisely the opposite. The result is waterlogging every monsoon in Rajendra Nagar and Kankerbagh and other low lying areas.

“Government can build high rises to stadiums in these areas. But every monsoon they would become a perfect recipe for disaster,” he added.

Kumar himself is a victim of the waterlogging. He managed to rescue his family, including his 100-year-old father, from Rajendra Nagar, four days after the rains.

Ironically, the chief minister of the state, Nitish Kumar, was his student in Bihar College of Engineering. It is hard for him to believe that a technocrat chief minister refuses to accept the reality of the faulty engineering of Patna.

Urban planning in a river city

Cities situated along rivers should plan urbanisation carefully, said Triyugi Prasad, the executive chairman of the Integrated Hydro Development Forum, Patna. These cities face the double threat of flooding from rivers and also rain-induced waterlogging. Patna is exceptionally vulnerable to such dangers as it is flanked by three major rivers: Ganga, Punpun and Sone.

A large part of the city was planned by colonial rulers who decided to select low lying areas, where constructing a robust sewerage system would incur a considerable cost. Unfortunately, subsequent state governments continued with the faulty urban plan of the British, Prasad said. 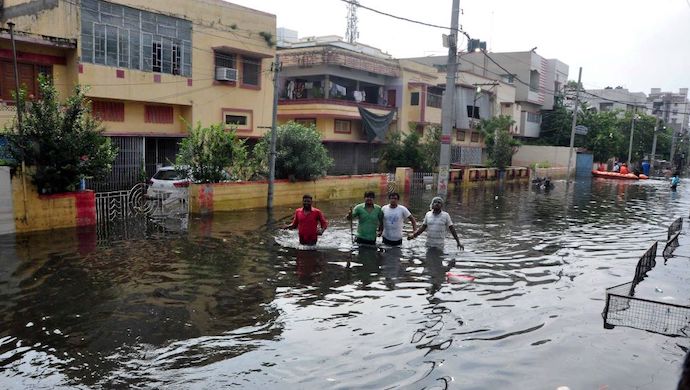 In many parts of Patna, the water still remained stagnant in the streets for days (Photo by Prashant Ravi)

In later years, the government built schools, colleges and hospitals in the same areas. As a result, scenes at the state’s second-largest hospital, Nalanda Medical College and Hospital (NMCH), were heart-wrenching with rainwater gushing in the intensive care unit and various wards, forcing evacuation of patients during heavy rains.

“Patients were shifted to Patna Medical College and Hospital (PMCH) after water inundated parts of the hospital,” said NMCH superintendent Chandrashekhar. Hundreds of students residing in hostels were hungry for two days until relief material was airdropped or delivered by the State Disaster Response Force (SDRF) and National Disaster Response Force (NDRF) teams.

In order to prevent such calamities, the city has pumping stations that draw out water from the low lying areas, but they are rarely functional. The choked drainage system and idle pumps lead to stagnation of water in these localities.

Where are the drains?

When officials scrambled to clear the choked sewage network — they could not find the map of the serpentine drainage system. Patna mayor Sita Sahu said that the map is missing since 2017 and might be with the Bihar Urban Infrastructure Development Corporation (BUIDCO), the state urban development department or the state water resources department.

With no accountability over the maintenance of the sewage system, the worst is still to come as the government is planning to construct a metro line in the same low lying areas, Kumar warns. The Bihar government and the Delhi Metro Rail Corporation (DMRC) signed a contract for the construction of metro lines in the low lying areas, just two days before the warning of heavy rainfall was flashed across the state.

Blaming it on climate change

Facing sharp criticism, the chief minister of Bihar, Nitish Kumar, attributed waterlogging in the city to climate change. Such a situation also prevails in megacities like Mumbai and countries in the US, he told reporters.

“Even other cities like Mumbai faced a similar situation. Why is there so much hue and cry over a few waterlogged localities of Patna? The climate is changing,” said a fuming CM.

A similar attitude prevailed during Kosi floods in 2008 when Nitish Kumar was also chief minister, and refused to acknowledge the severity of the disaster. It was at the initiative of former chief minister Lalu Prasad Yadav that the then Prime Minister Manmohan Singh conducted an aerial survey of the flood-affected areas and declared it a “national disaster”.

A decade after the destructive Kosi floods not much has changed in the Bihar, and its state capital remains equally vulnerable to extreme weather events. Not only are political leaders ignoring the root cause of the problem, but even state bureaucracy remains ineffective.

During the Kosi deluge, Pratyay Amrit was an additional commissioner of the state disaster management department. Today, he is at the elevated post of principal secretary of the same department handling relief and rescue operations. Despite decades of experience, lessons from the historic floods have not been learned.

Although the unprecedented rainfall is possibly an effect of climate change, that is not why streets are still waterlogged and homes still flooded. Both Rajendra Nagar and Kankerbagh localities face waterlogging every monsoon since the 1970s. And every year, the pumping station remains non-functional due to corruption.

Dinesh Mishra, a river expert, pointed out that the problem is simple and has continued for decades. “Since pump houses were not running, the rainwater flooded them. It happens every year,” he said. Moreover, unplanned construction along the Ganga River worsened the situation.

“They might find it convenient to blame it largely on climate change, but the reality is that it is mostly government’s inaction,” Mishra said.

Today, the price of corruption is being paid by both rich and poor. Ironically, Sudhir Kumar, a Patna High Court judge who – four years ago – ordered the state government to remove rainwater from the city within 24 hours, was seen rescuing his aged father.

Not everyone was fortunate enough to survive the deluge. A seventy-year-old woman died due to non-availability of medical help; her family members refused to talk to reporters.

By Mayank Aggarwal
India proposes to open 52 new coal mines of at least one million tonne capacity each, which could increase the country's methane emissions by 45 million tonnes in 20 years
END_OF_DOCUMENT_TOKEN_TO_BE_REPLACED

By Soumya Sarkar
High heat and humidity will take an increasing toll in death and ill-health in India and other tropical countries unless global temperature rise is limited to 1.5 degrees Celsius
END_OF_DOCUMENT_TOKEN_TO_BE_REPLACED

By Deepa Padmanaban
Climate change has hastened the melting of snow in the Himalayas in recent decades, creating unprecedented vulnerabilities that scientists are yet to fully understand
END_OF_DOCUMENT_TOKEN_TO_BE_REPLACED

By Joydeep Gupta
Climate change made the Uttarakhand flash flood in the Indian Himalayas possible, and poor development policies on building dams and roads made it disastrous
END_OF_DOCUMENT_TOKEN_TO_BE_REPLACED

By Soumya Sarkar
The United Nations has warned that immediate action is needed to face the triple environmental emergency of climate change, biodiversity loss and pollution
END_OF_DOCUMENT_TOKEN_TO_BE_REPLACED

By Joydeep Gupta, Soumya Sarkar, Varsha Singh
As the world warms and glaciers retreat faster, there is need to brace for more disasters and minimise impacts by reviewing ill-planned dams and roads in the Himalayas
END_OF_DOCUMENT_TOKEN_TO_BE_REPLACED

By Deepa Padmanaban
Rising temperatures are changing the water cycle, with less water is being replenished in river basins in the Himalayas, which has serious implications for water security in India
END_OF_DOCUMENT_TOKEN_TO_BE_REPLACED