The infamous burning of farm residue that blankets entire northern India in October and November in a toxic haze has already started in Punjab, Haryana and western Uttar Pradesh. With harvesting gathering steam in India’s breadbasket, the burning of leftover straw is set to spread like wildfire as farmers prepare their fields ahead of sowing the winter wheat crop.

Latest satellite images show that the smoke due to the burning of paddy straw is increasing in northern India. Air pollution has already touched alarming levels in Delhi. The Air Quality Index (AQI) plunged to 310 by October 17, placing it squarely in the “very poor” category, according to the government’s Air Quality and Weather Forecasting and Research (SAFAR) application. The situation is similar in the satellite cities of Noida and Gurgaon, SAFAR data shows.

The concentration of particulate matter — PM10 and PM2.5 — far exceeded the safe limits earlier in the week, triggering an Emergency Action Plan in India’s National Capital Region in and around Delhi. This bans operating diesel generators, mandates watering down of dust in streets and places strictures on building construction work, among other efforts to keep pollution levels down. The Delhi government has announced that it will implement the odd-even plan from November 4, which stipulates that private vehicles with odd and even registration plates can run on roads only on alternate days.

The annual autumn ordeal that turns northern India into a gas chamber has many reasons, including industrial and vehicular pollution, dust from construction sites, extensive use of diesel generators, burning of firecrackers during Diwali. Pollution authorities said that this year till now some 10% of the air pollution is due to burning of farm residues, a proportion that is expected to rise as more stubble on farms is set on fire.

These farm fires occur twice a year in India, after the autumn and spring harvests. Last year, New Delhi was enveloped in a thick haze that was partially due to widespread burning of straw left over from the rice harvest in Punjab and Haryana. On October 31, 2018, levels of particulate matter less that 2.5 microns reached around 700 micrograms per cubic metre in Delhi, more than 10 times the healthy limit, according to the Delhi Pollution Control Committee. PM2.5, or extremely fine particulate matter, is dangerous to health because the particles can penetrate deep into human lungs and bloodstream.

Air pollution in Indian cities is rising at an alarming rate and the high concentration of pollutants harm human health and hasten climate change, according to the World Health Organisation. Indian cities have some of the highest concentrations of particulate pollution, with as many as 14 cities among the worst 30, according to a Bloomberg report. Increasing air pollution in many of these cities is driving up the risk of stroke, heart disease and lung cancer in some of the most-vulnerable populations.

However, the problem of paddy straw burning can be solved through a slew of measures. One way to avoid burning straw and stubble is to find another use for the crop residue. Experts have suggested that gasifying the straw and stubble in a two-stage process that yields a fuel gas that can be used for cooking, heating and power generation, and any type of transport fuel, can be a viable solution. See: Easy solution to India’s air pollution problem 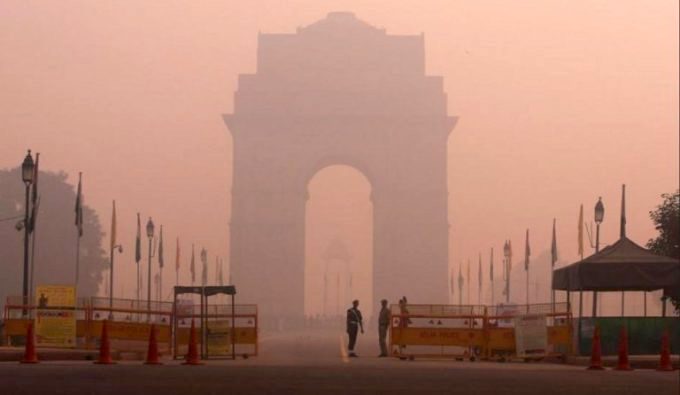 Another way that could tackle the problem while at the same time stimulate the rural economy is to convert this bio-waste into energy, according to latest research by The Energy Research Institute (TERI). Paddy straw can be used as fuel to run decentralised cold storages to store horticulture produce and milk at the village level, said the study titled Scoping study on bio-waste and non-ozone depleting substance-non-HFC alternatives in India.

Based on field research and discussions with farmers in selected districts of Punjab and Haryana, and a scrutiny of India’s various policies on biomass and waste to energy, the study found that there is a huge potential to establish a cold supply chain that uses paddy straw as fuel.

The study found that there is huge local demand of solid fuels like coal and fuelwood although the prices of these fuels are high. There is a need to create a biomass supply chain mechanism involving entrepreneurs and setting up facility to convert these materials into useful forms, the study said. A programme on bio-waste management, and cooling energy in agriculture sector could develop various new initiatives to address the common bio-waste burning problem, it said.

The states of Punjab, Haryana and western Uttar Pradesh already have a thriving horticulture economy, which could be further strengthened if there is a robust cold supply chain. A decentralized chain of cold storages could be built that would be powered by the locally available paddy straw, which is cheaper than either other solid fuels or grid-based electricity.

Once such a cold supply chain is established, it would boost vegetable cultivation, thus providing an additional source of income to many smallholder farmers. Such cold storages could also be purposed to service the local dairy economy.

The study said such a programme is viable within the existing government programmes to use biofuels and cleaner sources of energy. It will, however, require coordinated action by the federal and state governments, the study said.

There are other solutions. A mechanised technique to get rid of farm residue without burning it and sow the next crop can boost agricultural income in India’s breadbasket, new research has found. See: Happy Seeders reduce air pollution, boost farm incomes