Children are taking climate fight to the streets 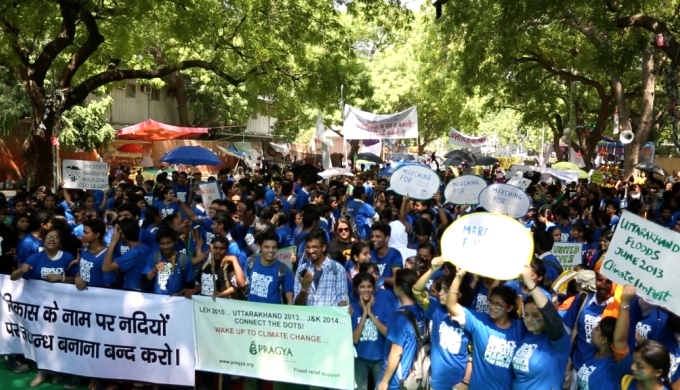 During the ongoing air pollution crisis in northern India, children have started organising protests in Delhi national capital region to demand their fundamental right to clean air. On 5 November 2019, a mass protest was organised at Amar Jawan Jyoti at India Gate, where children joined to raise their voice against the severe air pollution issue and the inaction of authorities and government on the matter.

On November 17, another protest was organized at the Leisure Valley Ground in Gurugram on the outskirts of Delhi, where thousands of protestors gathered on a Sunday morning asking the government to take action and ensure that residents have access to breathable air.

I don’t remember if as a kid I had to worry about air pollution and the impact it was having on my health. I was privileged to enjoy my childhood by playing outdoors and not hiding my face behind a mask. But times have changed. Today’s children are being denied of their fundamental right to breathe clean air. Is this fair?

In today’s time, children need to be aware and maintain a sustainable lifestyle that does not negatively impact the climate. It is everyone’s responsibility, including the children to ensure their action do not contribute to the issue of air pollution. However, it is not fair that the issue of air pollution has been impacting their life to the extent that they have taken to the streets to demand their social right – the right to breathe clean air.

In early November, Delhi declared public health emergency and the schools were shut down. A thick blanket of smog had engulfed the Delhi and the adjoining areas skies. In normal circumstances, holidays would bring cheers to children. A holiday which brings with it sore throat, burning eyes, wheezing, asthma, use of air purifiers, masks and more importantly an instruction from parents to remain indoors is not something to cheer about.

The issue of air pollution is recurring and becoming more and more severe with each passing year. The air quality in and around the national capital is counted among the worst in the world. With Air Quality Index (AQI) breaching the 1,000 mark in some areas, children feel that it is like subjecting them to living in a gas chamber.

Children are among the most at risk. “A child born yesterday in Delhi would have smoked 40-50 cigarettes on the first day of his or her life,” says Arvind Kumar, a lung surgeon at the Sir Ganga Ram Hospital in Delhi and founder of the Lung Care Foundation. This is the level of seriousness of the issue.

Time is running out. The children are anguished and are now raising their voice against the issue of rising air pollution levels and other impacts of climate change. They are questioning the government as to how their future is being put to such danger. They are urging the authorities to take necessary steps to curb air pollution as their childhood is at risk. They don’t want a life with masks and air purifiers but the liberty to walk and play outside without exposing themselves to toxic air.

In India, schools are taking various initiatives like Springdales School, Pusa Road in Delhi organized campaigns to make students aware of the hazards due to fire crackers ahead of Diwali. Students at the Shiv Nadar School, Gurugram organised focus group discussion where they discussed the severity of the issue, how it is impacting their life and presented certain asks to the government.

These young children are getting inspired by Greta Thunberg, the 16-year-old Swedish teenage climate activist, who is bearing the torch and influencing children across the world to take charge and demand their right for a sustainable future. She started a movement called Fridays for Future. This movement has gained momentum and has forced leaders to think about their choices and the impact it has on climate change and as a result on health of people especially the children.

Children are asking government to take responsibility, act quickly and decisively. They want setting up of a joint committee with student representation where tasks are identified, and responsibilities are fixed. These tasks to be backed up with measurable targets, which should be fixed with detailed discussion with relevant authorities.

The targets should have a timeline and noncompliance of these targets, should be met with strict penalties. There should be a quarterly monitoring and just like they get a report card in school, to have a similar performance report for air pollution and check the progress towards curbing it.

Children are putting lot of faith in leaders to steer the country towards protecting citizens from harm and building a sustainable pathway. The government will have to act now as the situation is alarming. If they will sit on it for years before they act, it will be too late, and the damage done will be irreparable. As US former President Barack Obama rightly said: “We are the first generation to feel the effect of climate change and the last generation who can do something about it.”

Save a bit of your lungs

By Shreeshan V.
Authorities need to move now to expand straw gasification and combat the next airpocalypse that is worsened by farm residue burning every spring and autumn
END_OF_DOCUMENT_TOKEN_TO_BE_REPLACED

By Soumya Sarkar
From players struggling in extreme heat to droughts and floods affecting cricket pitches, the game of glorious uncertainty now needs to adapt to climate change
END_OF_DOCUMENT_TOKEN_TO_BE_REPLACED

By Soumya Sarkar
Climate change, land degradation and deforestation are combining to jeopardise global food security unless radical changes are made, warn scientists from around the world
END_OF_DOCUMENT_TOKEN_TO_BE_REPLACED

By Soumya Sarkar
Water levels at India’s ports are rising much faster than elsewhere in the world, a marker of danger for the country’s infrastructure, coastal communities and ecosystems
END_OF_DOCUMENT_TOKEN_TO_BE_REPLACED

By Joydeep Gupta
Despite the drought gripping this region of India, one village in Marathwada in Maharashtra has flourished by growing grapes using innovative water saving methods
END_OF_DOCUMENT_TOKEN_TO_BE_REPLACED

By Hiren Kumar Bose
As climate change gathers pace, insects are proliferating across the world, which scientists say will threaten food production, particularly in bio-diverse countries like India
END_OF_DOCUMENT_TOKEN_TO_BE_REPLACED

By Joydeep Gupta
Cooling gases that are warming the world have to be phased out of India, but the industry is doing little about it in the absence of a long-term policy
END_OF_DOCUMENT_TOKEN_TO_BE_REPLACED

By Cheryl Colopy
Next to the coal-fired power plant of Vedanta's aluminium refinery complex near Jharsuguda in western Odisha, residents stare at ruined farms and poisoned water
END_OF_DOCUMENT_TOKEN_TO_BE_REPLACED

By Soumya Sarkar
Destructive human activity, rising temperatures in the Arabian Sea and ocean acidification is pushing the coral ecosystem in Lakshadweep to the verge of breakdown
END_OF_DOCUMENT_TOKEN_TO_BE_REPLACED
Share This