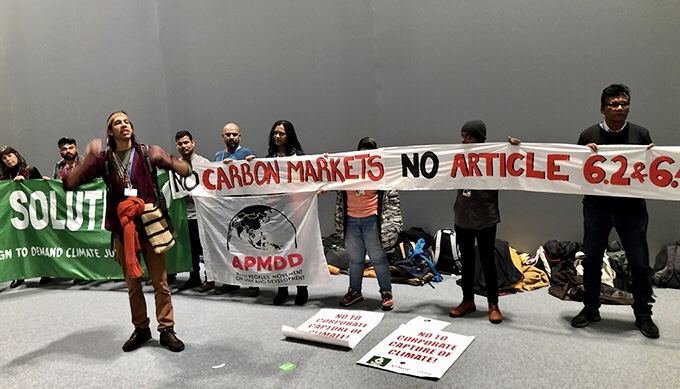 The difference between wealthy and developing countries on payments for reducing emissions of greenhouse gases is getting worse. The US and the European Union – strongly backed by NGOs based in these countries – are questioning the emission reductions, and are saying that the certificates poor nations received for these actions are worth nothing. Expectedly, developing countries are up in arms.

Over the past 15 years, developing countries prevented 19 billion tonnes of GHG emissions from reaching the atmosphere. They did this by installing pollution control equipment or planting trees or similar mitigating actions. It was agreed by the UN Framework Convention on Climate Change (UNFCCC) that these countries would receive carbon emission reduction certificates (CER) for these actions. They could then sell these CERs in global stock exchanges. Rich nations could buy these CERs and show them as part of their efforts to mitigate emissions.

It did not work because the price of carbon emissions in these stock exchanges crashed in 2012. From a high of around USD 20 per tonne in 2008, prices crashed to around USD 30 cents in December 2012. They now trade at around USD 20 cents apiece but there are no buyers.

Developing countries held on to their CERs in the hope that the market would recover. They are now left holding as many as 19 billion CERs. The three top holders are China with approximately 3.25 billion, India 750 million and Brazil 350 million.

On January 1, 2020, the world moves into a new regime under the 2015 Paris climate agreement. The US, Australia, the EU and a few other countries have been insisting that these CERs cannot be taken forward. Brazil led the fightback from developing countries at the 2018 Katowice summit, and the issue remained unresolved. It is the biggest unresolved issue confronting the ongoing December 2-13 climate summit being held in Madrid.

Echoing what the government delegates from some rich nations have been saying in negotiation rooms, Sam Van den plas of the Brussels-based Carbon Market Watch said the world “can’t afford to let the 19 billion CERs from KP (Kyoto Protocol, the current regime) pollute” the Paris agreement system. Brad Schallert, Deputy Director of International Climate Cooperation at WWF said, “The Kyoto mechanism is weighing us down. We don’t want to drown in worthless Kyoto credits.”

What about the work done?

“How can they describe as worthless all the work done by developing countries for 15 years?” an angry senior Indian government negotiator riposted. “Who is polluting – these CERs, or the rich countries? Why don’t they look at the reports on which countries are meeting their Paris commitments as of today? There’s not a single developed country there.” India is one of the few large economies meeting the Paris agreement goal to do its share to keep average temperature rise within two degrees Celsius from preindustrial times.

A senior Mexican government negotiator said, “Industrialised countries are increasing their emissions, as you can se from the latest UN reports. How dare they question the mitigation work by developing countries? We’re not going to let this pass.”

A Chinese academic who declined to be identified said, “Our government has more or less given up on taking these CERs forward. We could see for years that developed countries were not being honest about this, so we started our own domestic carbon (emission) trading market, where these CERs are bought and sold. But we fully support the position of developing countries.”

However, all developing countries are not on the same page. Delegates from the US, Australia and the EU have been telling the Association of Small Island States (AOSIS), the Africa Group and the Least Developed Countries that CERs have been “cornered” by big economies such as China and India, something that they will not allow under the Paris regime if these groups of developing countries drop their demand to take the CERs forward.

The Indian government negotiator said the issue would not be resolved without intervention from ministers, who are expected at the Madrid summit next week. “We hope they can reach a compromise on the principles,” he said. “The details can be worked out later.”

By Chetan Pandit, Asit K Biswas
India's civil society now has an opportunity to chart a new course of action that ensures water security through a balance between hydrological needs and environmental safeguards
END_OF_DOCUMENT_TOKEN_TO_BE_REPLACED

By Soumya Sarkar
The planet is losing biodiversity at an unprecedented rate, posing grave danger to human health and prosperity, the UN Convention on Biological Diversity warned in its flagship report
END_OF_DOCUMENT_TOKEN_TO_BE_REPLACED

By Olive Heffernan
With a range of marine geoengineering field trials moving forward, attention is turning to how research and eventual deployment should be governed globally
END_OF_DOCUMENT_TOKEN_TO_BE_REPLACED

By Bhasker Tripathi
Implementation of the clean air plans for India's cities can work if there are legal mandates, clear targets and accountability, coordination and sufficient funding
END_OF_DOCUMENT_TOKEN_TO_BE_REPLACED

By Birsha Ohdedar
India should rewrite outdated, colonial laws and empower local people in the Sundarbans so that embankments to keep out the sea work for communities and nature
END_OF_DOCUMENT_TOKEN_TO_BE_REPLACED