Destructive human activity, rising temperatures in the Arabian Sea and increasing ocean acidification is pushing the coral ecosystem in Lakshadweep to the verge of breakdown

The calm water of the lagoons in Lakshadweep despite a turbulent sea is because the encircling coral reefs smoothen high ocean waves, allowing marine life to flourish within the lagoon and protecting the islands (Photo by Soumya Sarkar)

“People come at night on small boats and cut away the coral from the reef,” says boatman M.P. Hidayathulla. “They use it mainly to build and repair houses and walls.” Calmly steering his 30 ft skiff through the choppy waters from Agatti Island to Bangaram atoll 11 km away, the Lakshadweep islander disapproves of such theft but isn’t quite sure what harm it could possibly cause.

Known as coral mining, this activity severely damages corals. The mined coral is most commonly used as a cement substitute. In many islands where coral grows, it is often the cheapest material to use to build roads, houses and seawalls. In the Lakshadweep archipelago, India’s only coral island chain 200-440 km off the west coast of the mainland in the Arabian Sea, such mining could prove disastrous to the already stressed coral ecosystem.

“The corals of Lakshadweep are the lifeblood of the islands,” says R.M. Hidayathulla, a researcher who first discovered that an uninhabited island has sunk under the sea due to accelerated erosion. “The loss of corals could destroy the structural integrity of the islands, ultimately leading to submergence.” See: Will Lakshadweep islands survive climate change?

Although the total landmass of the Lakshadweep archipelago of 12 atolls is merely 32.69 sq. km, the area covered by the lagoons is about 4,200 sq. km. It is a near impossible task to police such a huge area to restrain coral thieves and poachers of marine life, some of which fetch a pretty penny in the international market. “We need to raise awareness to control coral mining,” says Abdul Jabbar, the Range Forest Officer of the Lakshadweep’s Environment Department based in administrative headquarter Kavaratti. “People will have to realise that the health of the coral reefs is essential to save their homes and livelihoods.” 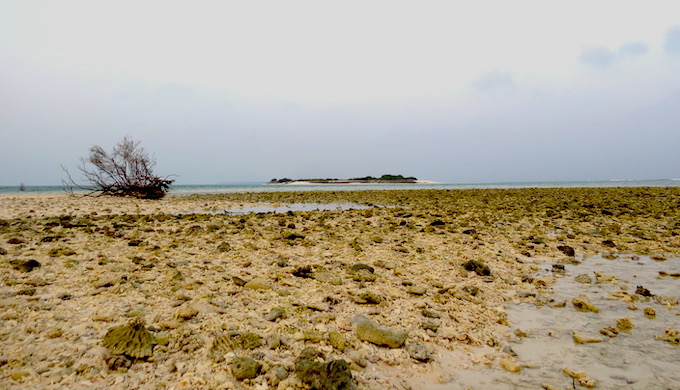 Corals help in island formation, as seen in Kalppithi islet in the Agatti atoll in Lakshadweep (Photo by Soumya Sarkar)

“Apart from natural calamities, the impacts due to other anthropogenic activities are many. In addition to tourism and transportation, dredging of navigational channels, unsustainable fishing practices, coastal development and souvenir collection have resulted in the (deteriorating) quality of environment pertaining to Lakshadweep islands,” R.M. Hidayathulla wrote in a research paper titled Studies on coastal erosion in selected uninhabited islands of Lakshadweep archipelago with special reference to biodiversity conservation. “Such activities together with coral mining had resulted in severe impacts on the ecology of the coral environments of the islands.”

Many of the islands in Lakshadweep are facing critical erosion due to a variety of factors. “The removal of coral reef for construction and other purposes and the dredging of navigational channel in the lagoons are major causes for the erosion,” says R.M. Hidayathulla.

Scientists say that the loss of coral reefs could be fatal for the 26 islands in Lakshadweep, out of which 10 are permanently inhabited by about 65,000 people. The carrying capacity of the Lakshadweep landmass depends on the formation of atolls, and healthy corals are essential to island formation.

The mining of corals in Lakshadweep is but a small part of the stress that this unique ecosystem suffers. Warming sea temperatures pose a far greater danger to their existence. The world’s seas and oceans absorb most of the excess heat from rampant greenhouse gas emissions, which lead to increased seawater temperatures.

A recent report by the Intergovernmental Panel on Climate Change, the world’s largest body of climate scientists and experts, has predicted that coral reefs could suffer a mass die-off by 2040, just 21 years away. Coral reefs will decline by 70-90% with global warming of 1.5 degrees Celsius, and virtually all of them (99%) would be lost if global temperatures rise by 2 degrees Celsius compared with preindustrial times, the report said.

Algae and sea coral have a symbiotic relationship, with the corals providing the algae with a place to live, and algae providing minerals and nutrition to the corals through photosynthesis. The presence of the algae is what gives the corals their captivating colours. Higher sea temperatures can force corals to expel the algae to survive — in the process losing their colours, which is why this process is called coral bleaching. The weakened corals, deprived of critical nutrition, can recover if the situation is reversed, but in their fragile state, they are prone to dying. Such coral bleaching events are becoming increasingly frequent in Lakshadweep.

Corals bleach when sea temperatures rise above their tolerance levels. Such bleaching events, which lead to mass death, have become more frequent in the Lakshadweep archipelago (Photo by Vardhan Patankar)

In 1998, a strong El Niño — the warm ocean current that starts in the Pacific Ocean — led to devastating coral bleaching in Lakshadweep because sea temperatures rose by as much as 3-5 degrees Celsius above normal. The mortality rate was around 90% in some atolls.

“This was followed by two more major bleaching events in 2010 and 2016,” says Idrees Babu, a scientist with the Department of Science and Technology of India’s federal government. The increasing frequency of such events is not allowing the corals to recover, Babu said. Coral need 3-5 years to recover from bleaching.

The changes in the quality of seawater, especially ocean acidification, are also likely to increase the risks of coral bleaching. This will lead to loss of critical marine habitats, scientists say. Oceans are slightly alkaline. But now, since they are absorbing increasing amounts of carbon dioxide, they are veering towards neutral to acidic. Increasing acidity has harmful affects on marine organisms and leads to coral bleaching.

A study, carried out for 18 years by the Oceans and Coast Programme of Mysore-based Nature Conservation Foundation and published recently in the Coral Reefs journal, says that although the corals in Lakshadweep are showing increased resistance, they are not recovering well from the impacts of climate change. “Given the frequency of current warming events, the increased reef resistance over the last two decades is likely not sufficient to also ensure gains in coral cover in Lakshadweep’s reefs,” the study’s authors said.

Corals, the rainforests of the oceans, are among the oldest ecosystems in the world and support an amazing variety of marine life. Although they cover a mere 0.25% of the global sea surface, they sustain almost a fourth of the world’s fish species. In Lakshadweep alone, there are an incredible 190 types of ornamental fishes, besides a virtual cornucopia of other marine life that are sustained by the coral reefs.

U. Ukkas, 58, a fisherman from Agatti Island, says, “We have lost our respect for the coral reefs that sustain us. If you harm nature, it will bite back.”

This article was reported with support from Earth Journalism Network.