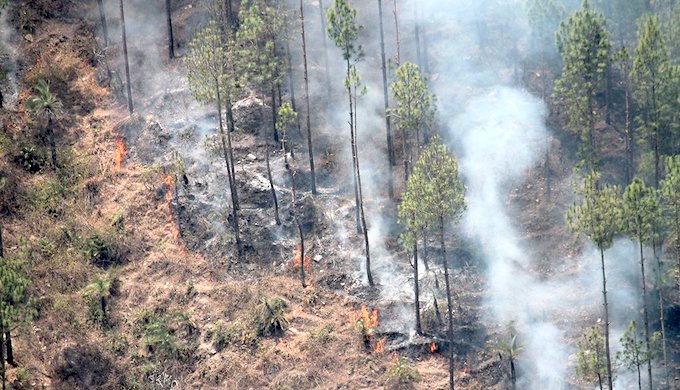 “We have vast grasslands in the area and during dry months like March and April, it is easy for fires to spread across the forest,” said Naveen Khandelwal, deputy director of the Pilibhit Tiger Reserve. He also noted that many farms surround the tiger reserve and, “when farmers burn crop residue, the fires sometimes spread to the forests also.”

The Pilibhit Tiger Reserve falls in the Terai Arc Landscape in the foothills of the Himalayas. It is one of the most fire-prone areas in the country.

In addition to being a local problem, fires in the Terai region have larger impacts, especially on glaciers in the Himalayas.

Forest fires and crop burning, in addition to pollution due to emissions from other sources like coal-burning power stations, transportation and brick kilns, are causing high soot depositions in the Himalayas.

Black carbon, a component in soot that absorbs light more strongly than any other substance in the atmosphere is now settling over Himalayan glaciers and disturbing the principle based on which these glaciers have survived over centuries, namely that light-coloured surfaces reflect sunlight and darker coloured ones absorb it.

“During April-May, about 30-40% of black carbon deposition in the [Himalayan] region is due to forest fires,” said Siva Praveen Puppala, Senior Aerosol Scientist at the International Centre for Integrated Mountain Development (ICIMOD), an intergovernmental research centre that works on issues critical to countries in the Hindu Kush Himalayas.

When black carbon particles settle over glaciers, they darken the surface and enable higher absorption of light and heat, eventually causing the snow or ice to melt. In addition to such direct impacts, black carbon particles that remain suspended in the atmosphere absorb sunlight and infrared radiation and warm the air which also contributes to glacial melt, among other impacts of warming like altered monsoon patterns.

P.S. Negi, a scientist at the Wadia Institute of Himalayan Geology, explained that vegetation burning – both forest fires in the summer between April-May and crop burning in winter between October-November – lead to high concentrations of black carbon in the Himalayan atmosphere.

Limited levels of crop burning are also noticed during the summer, Negi added.

Black carbon concentration over the Chirbasa site near the Gangotri glacier was highest during the month of May and lowest during August, noted a paper titled ‘Black carbon aerosols in the ambient air of Gangotri Glacier valley of north-western Himalaya in India’ published in August, 2019. Negi was one of the authors.

The paper noted that black carbon concentration in the region and its seasonal variability was significantly influenced by the emissions resulting from agricultural burning in the western half of the country and forest fires along Himalayan slopes during the summer. 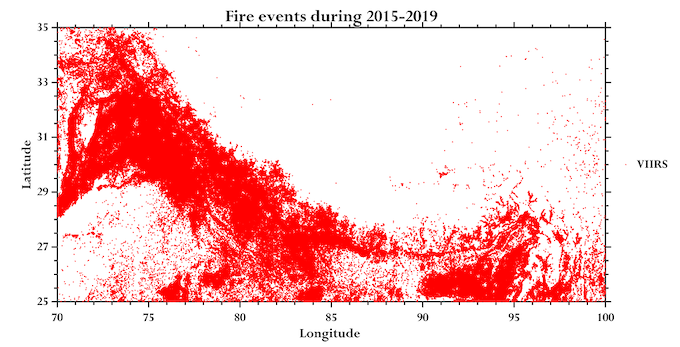 A geographical representation of fires (Image by Siva Praveen/ICIMOD)

Currently, Puppala and team are studying the impacts of black carbon on the Yala glacier in Nepal. The study shows that 23% of the annual black carbon concentration during 2016-17 drew its source from forest fires and agricultural burning, Puppala said.

He explained that during months like April significant amounts of black carbon are emitted into the atmosphere. This creates favourable conditions for higher glacial melt which is also influenced by other factors like cloud cover, temperatures being above zero degrees Celsius, radiation and precipitation. All these have a significant impact in determining glacial melt.

An analysis of fire count data representing both forest fires and crop burning between 2015-2019 shows that the months of April and October are particularly significant.

It is also noteworthy that these numbers are drawn from the Visible Infrared Imaging Radiometer Suite (VIIRS) which is an instrument that observes Earth’s surface only twice a day meaning that it is very likely that the numbers are an underestimate. Fires that have died out before the observational period would not be included.

The other reason why such numbers are an underestimate is the fact that today, satellite detection of fires is possible when land areas are at least one square kilometre in size. “In many parts of India, farmers only own two or three acres [of agricultural land] and crop burning in these lands is too small for satellite detection,” Puppala said. However, this would be captured if a number of farmers set fires to their agricultural residues around the same time, which is the usual practice.

For the current analysis, VIIRS data has been used because, despite its drawbacks, it is still widely considered as the best tool for monitoring fire activity.

The one ray of hope is the fact that black carbon is a ‘short-lived climate pollutant’ which stays in the atmosphere for a few weeks only. This is very different from carbon dioxide which stays in the atmosphere for centuries. Emission cuts today would still mean that it would take centuries for the already-existing carbon dioxide to be dealt with.

In contrast, actions like limiting conditions that allow forests to burn and providing alternatives to farmers who burn crop residue so as to limit black carbon emissions would provide results that could be witnessed within weeks.

The short lifespan of black carbon also means that it has a limited window to spread. So, targeting emissions at the source would go a long way to ensure that warming impacts are reduced. For now the immediate issue is going to be controlling the fires in April and May.

Pradeep Varma, a ranger at the Dudhwa Tiger Reserve on the foothills of the Himalayas, said, “We worry [about fires] during April and May, especially if the rainfall is low.” He added that forest staff at Dudhwa Tiger Reserve is currently working on mitigation techniques like fire lines to prevent the possibility of fires spreading across the forests in the coming months. But with limited focus on the issue, the rangers and forest officers will be lonely warriors against the threat to the Himalayas.