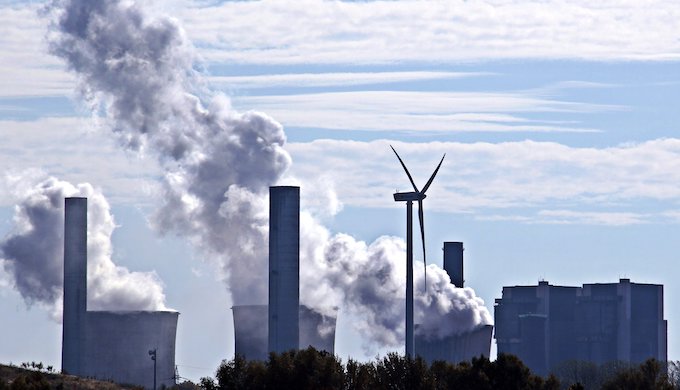 The country-wide lockdown to tackle the Covid-19 pandemic in India resulted in an unprecedented drop in air pollution levels across cities. As people practise social distancing and marvel at the positive impact of the lack of human mobility on the environment, this is an opportune time to curate and run an effective air pollution campaign so that the new normal might be brighter.

Air pollution causes nearly two million deaths in India every year. As many as 21 out of the 30 most polluted cities in the world are in India. Yet, public outrage and civic action towards air pollution are sporadic and scattered, peaking during Diwali but remaining low-key for the rest of the year.

In light of this trend, Clean Air Fund and Quilt.AI studied the history and impact of 30 major environmental and public health campaigns in India since 2015. We sought to answer some key questions: What makes a campaign effective? What are the communication cues adopted by them? What is the role of timing and semiotics?

We analysed 21 million data points on online search behaviour for air pollution, more than 7,000 tweets, over 5,000 images and 63 Facebook pages using Quilt’s Culture A.I. tools, including emotion and linguistic analysis. We found that the nature of the air pollution campaigns in India range from the raw to the curated.

While the former represents an unvarnished truth via unfiltered images and dense rhetoric, the latter uses animated or highly edited images and sophisticated media strategies to tie local truths to global discourse.

Campaigns also differ based on the types of information they share. While some of them target informed citizens by highlighting facts and accurate information, others target passionate advocates with poignant images and moving tales to inspire individuals to act together.

Based on this understanding, we observed five broad profiles of air pollution campaigners. They are candid scientists, bridge builders, local crusaders, global activists and fearmongers. 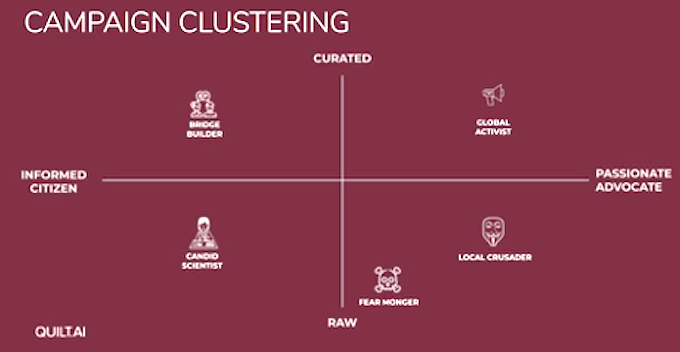 These are typically research-based organisations consisting of scientists and knowledge seekers. Their campaign strategy is to raise accurate awareness about the issue and work with various stakeholders and politicians to change policies.

They seek to convince their target audience using statistics and academic or technical jargon to precisely frame the issue and provide a glimpse into formal knowledge-sharing events. The most common phrases identified by our artificial intelligence (A.I.) include capacity building, adverse health effects and sustainable development.

This section believes that the challenges of air pollution can be solved by establishing collective mechanisms informed by fact. These campaigns use unpolished images, showing researchers and knowledge seekers hard at work during workshops and symposiums on their social media channels. The top A.I.-detected emotion from their posts is collective bonding.

Bridge builders range from corporations to grassroots organisations. They are flexible communicators seeking to raise awareness on climate change. Using a spectrum of messaging, they aim to have a message that can appeal to a broad range of stakeholders.

To them, air pollution can be solved by having a more informed society that has a strong sense of community. Almost 10% of their tweets contained the word we, while the top A.I.-detected emotion is collective bonding at 50%.

From plenary sessions and infographics to protest marches, these movements find campaign processes, messages and actions that appeal to multiple sectors and audiences.

Local crusaders are grassroots organisations and local advocacy initiatives that seek to inspire the everyday citizen to act. They use simple but emotive messages in native languages. Images uploaded on social media are unfiltered, symbolic pictures of fierce demonstrations and successful community projects, invoking feelings of success and community, whilst collectively fighting the good fight.

These initiatives are highly localised, often in rural settings, in order to spur communities to join the movement. The top detected emotion is collective bonding. Local crusader campaigns differentiate themselves with the second top AI-detected emotion, which is emotional. Terms like rich soil, abundant water, lungs, beating heart and dream dominate the list of commonly used phrases.

The top AI-detected emotions in this case are collective bonding (55%) and emotional (26%). This cluster also has the highest percentage of detected detached reality (4.3% higher than average) and the campaigns have a polarising effect due to the use of politicised perspectives.

While this creates a strong sense of community and results in greater reach, they also inadvertently cause an ‘us versus them’ sentiment, hindering the effectiveness of cross-sector partnerships.

The fearmonger is not explicitly found in climate campaigns but could be an effective strategy to bring stronger attention to air pollution. Major political parties use this style of campaigning and tend to have strong, nationalistic undertones.

A sample of some of the best- and worst-performing digital campaigns (Source: Quilt.AI)

Multimedia uploads are a mixture of highly curated and highly raw, emphasizing the message of diversity and inclusion. The majority of messages are about specific issues that should be changed. However, for every 4-5 progressive messages, there is one repeat message about nationalism and ‘the enemy’ who we must fight against. This strategy could be effective for air pollution campaigns, especially if it is framed as a war that needs to be fought.

Each profile of campaigners has their own unique strengths; collaboration and strategic partnerships are likely to make air pollution campaigns more effective.

What makes a campaign effective?

After understanding existing and past digital air pollution campaigns in India and the counter-narratives they are faced with, we developed an online effectiveness framework that gave us insight into which campaigns have the greatest online reach and effectiveness. However, this is not a reflection of their overall impact, as offline interventions and impact are not taken into consideration.

Timing and usage of certain words are important elements of any effective campaign. We found that both the search volume and rate of change for the following air pollution-related words rise significantly between the months of October and January each year and can be used more: air pollution, causes of air pollution, air purifier, effects of pollution, PM 2.5, Diwali pollution, and anti-pollution mask.

The majority of campaigns we analysed launch in May. However, based on search behaviour, it is more strategic to launch in October and finish by February of the following year.

Anurag Banerjee is co-founder and CEO of Quilt.AI.