Wildfires in the summer months, particularly in the northeastern and central parts of India, are becoming increasing frequent due to the warming effects of climate change 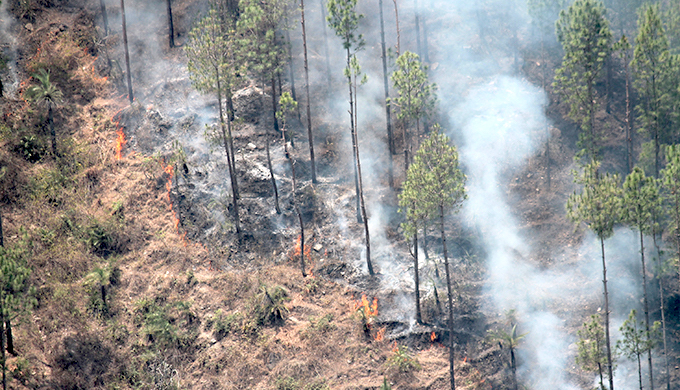 A forest fire in Uttarakhand (Photo by Joydeep Gupta)

With India preoccupied with the Covid-19 pandemic, there was little attention paid to the many forest fires that broke out this summer, worsened by heat waves.

In one case, six people were killed in a forest fire in Uttarakhand’s Pauri Garhwal district on May 23. Experts said that apart from the temperature reaching 45 degrees Celsius on some days this summer, there had been very low rainfall last winter, making the forest extremely dry. Worse heat waves and drier winters are impacts of climate change, scientists say.

The most vulnerable regions are northeast and central India, says FSI. Mizoram had the most fire alerts, 2,795 in 2018. Seven states in the northeast had 10,210 fire alerts, one-third of the alerts in India. Since 2011, 695 forest fires had damaged property worth INR 90 crore (USD 12 million) in Mizoram.

Lalit Kumar Sharma, a scientist with the Zoological Survey of India (ZSI), says Jhum cultivation is the major cause of forest fires in the northeast. “My experience is that most forest fires in Mizoram are because of Jhum cultivation. The fires take place between January and March. The northeast has tropical evergreen forests and unlike the dry deciduous forests of central India, these are not likely to catch fire easily.”

Lalrammawaii Sailo, deputy conservator of forests in the state, said, “In Mizoram, 50% population living in rural areas depends on Jhum cultivation. It involves clearing a piece of land of trees and vegetation and then setting it on fire. The burnt soil provides potash which increases the nutrient content of the soil and helps in growing crops. Therefore, most of the times we have agriculture-related fires which then spread to adjacent forests.”

Sailo added Jhum may be the reason fires are started, but they are now spreading further and faster due to climate change. Its impact is that overall temperature is higher and humidity is lower, both aiding the spread of fires.

Sharma of ZSI says most of the fires are caused by people failing to stub out cigarettes and beedis, but adds that some are caused by lightning.

Using the MODIS (Moderate Resolution Imaging Spectro-radiometer) sensors onboard the Aqua and Tera satellites of NASA, FSI works as the fire warning centre for state forest departments. Since 2017, FSI also has a sensor called SNPP-VIIRS (Suomi-National Polar Partnership – Visible Infrared Imaging Radiometer Suite). It can now detect fires at night and even small fires under the tree canopy.

Losses due to wildfires

Forest fires decimate plants and animals, take away the source of fodder and fuelwood for local residents, destroy timber and non-timber forest produce.

There is more damage. S. Jayakumar of the Department of Ecology and Environmental Sciences in Pondicherry University says, “Forest fires have an impact on the key element, soil. There are lots of microbes in the soil that are beneficial to the entire ecosystem, without which humans can’t survive. After a fire occurs it causes the soil to lose its absorption ability which causes the water to float on top. That leads to soil erosion and infertile soil.”

A forest changes after a fire, because some plants grow better on charred soil. Ecologists have long studied the succession of plants and then animals in an area that experiences a natural forest fire. Jayakumar says, “When a fire occurs in a region it promotes plant species that can survive and grow after a fire. If the fire is consistent, it has major impacts on the biodiversity. In other regions where a fire is occurring once in 10 years or so, it upsets the diversity.”

The scientist explains, “A forest is divided into top canopy, understorey and forest floor. High intensity fires will eradicate the forest floor and understorey, consisting of regenerating species, shrubs and biomes. Low-intensity surface fires enhance the growth of seedlings and saplings and mineralise the soil. The wildlife is completely dependent on plants. Fires disturb the food chain. If the fire burns all the plants then there is an imbalance in the food chain and the animals have to migrate.”

When fires create gaps in a forest, the area is vulnerable to invasions by exotic species. For example, Imperata cylinderica (cogon grass) recovers quickly after a fire and responds with an increase in cover. Invasive species can lead to the depletion of the biodiversity of an area, by producing chemicals that influence the growth and survival of other forms of life.

Satpuda Foundation is an NGO that works in the fire-prone forests of central India, in Maharashtra and Madhya Pradesh. Founder Kishor Rithe says its GIS department monitors forest fires online and informs the forest department. “Each year, our teams assist in preventing and fighting fires, which are common in the six tiger reserves that are in the dry deciduous forests of central India. We start with awareness programmes from spring onwards and then extend our efforts to physically fighting the fires, which occur during summer.”

The NGO’s education department spreads awareness on the impacts of forest fires and tells schoolchildren about the surrounding forests and water bodies. “We have two well-equipped vans which deliver a conservation education programme to around 10,000 students every year in the villages around tiger reserves,” Rithe says.

Karmistha Bhimwal is a student of Jindal School of Journalism and Communication, OP Jindal Global University. She is doing an internship with India Climate Dialogue.