What if Kolkata was swamped in climate horror

The makers of Wade, an award-winning short animation film, imagine a climate dystopia where a rising sea floods their home city of Kolkata

With its gorgeous artwork and gory plot points, Wade is a compelling watch (All images courtesy the makers of Wade)

Wade, a new animated film about the climate crisis, is a fraught and intense nine-minute watch. Every artistic choice, from its oppressive soundtrack to the wide-eyed, hyper-alert characters, is designed to make Wade unsettling. This is, of course, the point: to create a horror film that disturbs viewers out of complacency and inertia.

An unflinching vision of a dystopian Kolkata, Wade imagines what will happen if a rising sea floods the capital of West Bengal, with humans and animals alike sloshing through thigh-deep, litter-strewn water. After taking time to set the (fantastically illustrated) melancholy scene, the action centres on a surreal encounter between two groups of climate refugees – humans and tigers.

With its gorgeous artwork and gory plot points, Wade is a compelling watch – one that has already attracted international acclaim. At the time of writing, the film had won the prestigious City of Annecy Award, as well as Best Art Direction at Animayo film festival and the Audience Award at Brooklyn Film festival.

Its co-directors, Upamanyu Bhattacharyya and Kalp Sanghvi, grew up in Kolkata and based their studio, Ghost Animation, in the city.

On May 20 Cyclone Amphan, the strongest cyclone since regular records began in 1982, battered the Sundarbans, the world’s largest mangrove forest, and went on to wreak havoc in Kolkata. Screenings of Wade at international film festivals began not long after Amphan made landfall. Did the timing make Wade feel more pertinent?

“It was quite horrible to see imagery from the film materialise so soon, and a lot of viewers messaged us with photos similar to what we had depicted,” said Bhattacharyya and Sanghvi. Due to the coronavirus pandemic, Bhattacharyya has been in Italy for the past four months, but Sanghvi was in Kolkata when Amphan struck.

Bhattacharyya, 26, and Sanghvi, 28, are part of a wave of young filmmakers who grew up with a heightened awareness of climate change. In 2016, the year they started to work on Wade, Bhattacharyya and Sanghvi read an article about islands in the Sundarbans sinking and the mass migration that this would potentially cause. “That’s when we found a narrative in the predictions that all this water and all these displaced people would inevitably hit Kolkata some day,” they said. 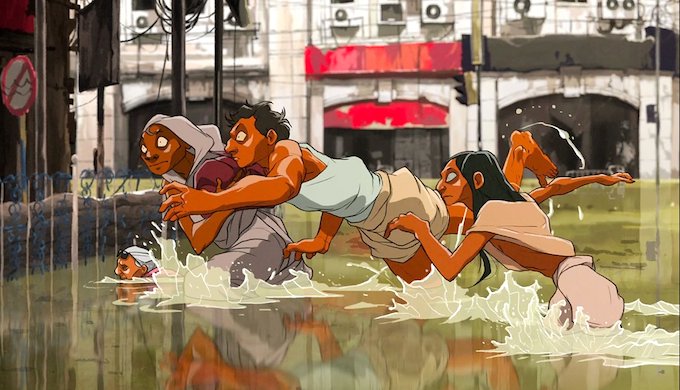 In Wade, the bustling metropolis has become a silent swamp. Crocodiles lurk on once-busy streets and crows fly over decaying landmarks. Trains rust in abandoned stations; dragonflies flit through empty bus depots. The few remaining people sleep on the rooftops and scavenge – cautiously – during the day. And, like in a zombie apocalypse film, something menacing waits in the shadowy alleyways and beneath the surface of the water.

“Go to high ground”, graffiti daubed in red paint screams into the silence. “Vote against ‘climate change’ lies”, “Beat the sea level”, “The flood will not reach Kolkata” and “Send back! Save Kolkata from climate change refugees”. It’s a clever way of establishing what has happened to the city – as well as making the film accessible to a global audience. Bhattacharyya and Sanghvi said, “We’re happy it worked out in such a way that there’s no language barrier. Anybody can tune into the context immediately.”

What was it like to imagine a well-known city as a wasteland? “Extremely painful,” said Bhattacharyya and Sanghvi. “We don’t want that to happen.”

People who live in Kolkata have told them that the city is “achingly recognisable”. The directors added, “We put in as much attention to detail as possible to make sure that viewers, especially from Kolkata, would believe this could come true.”

The film’s main action happens right outside the faded pink exterior of Flury’s bakery on a waterlogged Park Street – the most fashionable part of Kolkata.

“We wanted to show Park Street, the ‘good times’ street, to show that all the affluence, pleasure and comfort won’t hold for very long when climate change hits. It’s a ghost town-in-waiting, and it’s always sad to think of that. A lot of our viewers have had very good times in Park Street – we’ve even screened the film at a café there – so it’s like seeing a friend suffer,” the directors said.

It’s significant that there’s no sign of Park Street’s wealthy inhabitants in Wade. Bhattacharyya and Sanghvi said, “We think that, not unlike what we’re seeing during the pandemic, the wealthy will manage to buy a way out. The people who contribute the least to climate change will be left behind to suffer through the mess.”

The Sundarbans National Park, about 100 kilometres from Kolkata, is home to the world’s largest population of tigers. Ghost Animation made another short film about human-tiger conflict in 2018, commissioned by the Wildlife Trust of India. What is it about the endangered big cat that makes it such a good subject for animation?

“Tigers are an integral part of Bengali lore,” said Bhattacharyya and Sanghvi. “Sometimes as comically silly antagonists, sometimes as titanic forces of nature and shape-shifting gods. Their iconography is quite ubiquitous.”

“We’re very aware that Kolkata itself was carved out of forests where tigers reigned supreme and were later hunted into near oblivion. When the Sundarbans flood entirely, it’s likely that they’ll be forced to move north and back into Kolkata.”

As both become climate refugees, humans and tigers are pitted against one another in the fight to survive

In Wade, the loss of the Sundarbans, and intrusion of top predators into a human jungle, has some strange consequences. One of these is that a large number of tigers – normally solitary animals – have banded together. “We’ve tried to show a huge change in behaviour because of their harshly altered environment,” said Bhattacharyya and Sanghvi.

As both become climate refugees, humans and tigers are pitted against each other in the fight to survive. The directors said, “The fact that they would literally eat each other to survive with no clear upper hand was meant to heighten the sense of a completely debased ecosystem.”

“We believe nature has a way of balancing everything. In a way, even tigers returning to the city is a form of rebalancing. We wanted that balance to be the invisible force in the film. If something is taken, especially unfairly, it has to be given back.”

Bhattacharyya and Sanghvi both studied animation at the National Institute of Design, Ahmedabad. Do they think that animation has particular strengths when it comes to telling climate stories?

“Animation has the power to instantly materialise hypothetical scenarios,” they said, adding that stories like Nausicaä of the Valley, Hayao Miyazaki’s post-apocalyptic anime film, or Mononoke, the Japanese anime television series, “get you to actually, truly, care on a human level much more than a factual overload ever could.”

“Animation also has the honour of being a core medium for children. If they get the message early on, the future gets even more hopeful.” More broadly, do Bhattacharyya and Sanghvi think mainstream cinema has done enough to raise awareness about the climate crisis? “Most probably not,” they said. “Disaster movies tend to lose all sense of scale and believability, so you hardly ever leave the theatre with any newfound environmental consciousness.”

As is to be expected from an arthouse film, to unpick Wade you need to watch it a few times – and even then, might have a lot of questions. What did it all mean? Is it significant that only two characters do not have to ‘wade’? Is the ending optimistic?

So what response did Bhattacharyya and Sanghvi want people to have to Wade?

“Beyond just hoping to affect even a small amount of personal change in our viewers by showing them how plausible this future scenario is, we’re also hoping to highlight some ethical issues that we’ll soon be faced with.

“We want our viewers to reflect upon whether they’re ready to leave the city when climate change hits. Will they be welcome wherever they show up, asking for help? Will they be welcoming to people who turn up in Kolkata after their homelands are submerged? Moreover, how absolute is the value of a life in such difficult times, and would they go to the lengths that some characters in the film go to in order to survive?”

“We’re hopeful that the people of the area will come together strongly to defend Kolkata against the rising waters. That said, the city has a lot of work to do to maintain public infrastructure and limit seasonal flooding. We remain optimistic. We just want to keep doing our part to make sure that Wade never becomes prophetic,” they said.

Wade is currently being shown only in online screenings at film festivals. To watch the film, viewers can check Ghost Animation’s website and Instagram profile @wadethefilm

This article was first published in the Third Pole.