India should rewrite outdated, colonial laws and empower local people in the Sundarbans so that embankments to keep out the sea work for communities and nature 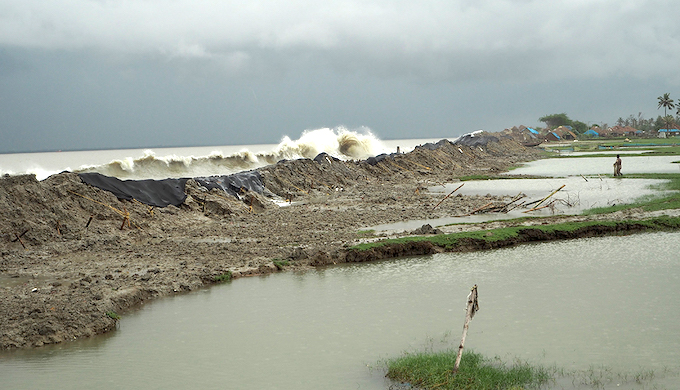 Cyclone Amphan has devastated millions of lives in the Sundarbans, a tidal forest on the shore of the Bay of Bengal.

Beyond disaster relief, ‘rebuilding’ the Sundarbans will be a monumental task – one that cannot repeat past mistakes. It must be attuned to a climate-stressed world where rising sea levels and cyclones will continue to batter the region, which is the largest delta and mangrove forest on earth.

The region has long been in a state of structural dysfunction, bringing great harm and impoverishment to millions. This impoverishment is not a natural state or determined purely by the fragile ecology. Rather, it is the result of human agency, policies, laws and institutions.

After a disaster several things usually happen. There is a cry for funding,  some (usually inadequate) funding provision, followed by reconstruction. In the Sundarbans, this involves building embankments.

The embankments of the Sundarbans protect the islands where people live and are vital to their safety and livelihoods. When an embankment is breached, saline water enters farmland and food can no longer be grown. A downward spiral often follows, as people move into further marginalised activities (such as collecting prawn seedlings), or migrate under precarious conditions.

Embankment law in the state of West Bengal has not changed much since the colonial era: the Bengal Embankment Act is almost 140 years old. Today this legislation operates in a completely different social and ecological reality.

Colonial laws vest complete power in the state bureaucracy, the Irrigation & Waterways Department (IWD). Under the law, the embankments are government property. The department is the ultimate arbiter of where, when and how embankments are built and maintained. These decisions are life-and-death issues for the people who live in the Sundarbans.

Research has shown a high level of apathy towards development in the region from local government bureaucracy, especially the IWD. The state chooses whether or not to respond, with local people unable to take part in any meaningful sense, in the decisions that govern their lives. For example, studies found that this centralised control was at the heart of poorly built infrastructure and the misuse of resources after Cyclone Aila in 2009.

Decisions about embankments could be democratically controlled, through legislative reforms, by the communities whose lives depend on their maintenance. Communities need to be empowered – both through the provision of resources and legal power – to create an environment where people and nature can thrive together.

In recent years, a lot of money has been spent on constructing concrete embankments. These embankments are unfit for the surrounding environment. Research has found that concrete structures disrupt the natural ecology of the islands without offering protection when a strong cyclone hits – in 2012 Anurag Danda, then head of the WWF-India’s Sundarbans and climate adaptation programme, said such structures had been washed away twice at the island of Mousuni.

There is also an urgent need to update the science and knowledge embedded in the way embankments are built. The Bengal Embankment Act assumes a fixed distinction between land and water, as the British based the law on the geography of their own rivers.

Embankments (left) can displace people, who become more vulnerable as they are forced to rebuild their huts (right) outside the area the embankment protects (Photo by Megnaa Mehtta)

But in the delta which makes up large parts of eastern India, the border between land and water is constantly changing. Concrete embankments assume a clear demarcation, but this is not possible in the region.

Architects in other parts of South Asia have been researching new ways of designing in flood-prone and coastal areas, which are cognisant of the local ecology, changing climate and social needs. These approaches try to work with water and floods – for example, embracing overflows into land at certain times and places, overturning many centuries of seeing water as a threat. Many experts are now calling for these ideas to be engaged with in the Sundarbans. The state’s role should be to facilitate the interaction of such experts with democratically empowered local populations.

Recently, the Indian government pushed through a series of reforms that allow more “development” in areas such as the Sundarbans, where mangroves are recognised as a crucial buffer against cyclones and storms in a climate-stressed world. An investigation found that the reforms ignored 90% of public representations made nationwide. This demonstrates how coastal areas have always been ruled from the top down.

There is also widespread flouting of environmental rules to create ‘eco-tourism’ in the region. The badly planned construction of roads, resorts and jetties leads to massive habitat destruction. Moreover, infrastructure for tourism, such as hotels and restaurants, takes priority in the allocation of vital resources like water, with groundwater being diverted from local people and farmland.

Meanwhile, while local people have forestry rights, conservation concerns are often used as an excuse to deny their rights and criminalise their activities.

In 1979, the state carried out a massacre of hundreds of Dalits (people in the lowest group in the Hindu caste system) in Marichjhapi – ostensibly to protect the forest. For decades, interest in the Sundarbans has been limited to protecting tigers or forests, largely at the expense of communities. Recently, a planned relocation of populations in the Sundarbans to create buffer zones has been advocated by some researchers.

The overall approach could be described (to use the words of Nivedita Menon, the professor of political and feminist theory, from a different context) as privileging ‘the environment over people, and development over the environment’.

Mangroves, migration, embankments and eco-tourism will all have some role to play in rebuilding efforts. But, a reframing (and decolonising) of governance and law is long overdue. The rights of residents need to be reflected in law and policy. Ignoring the voices of the suffering has been central to the story of the Sundarbans. It must not be repeated now.

Birsha Ohdedar is a lecturer at the School of Law and Human Rights Centre, University of Essex, UK. He works on water, climate justice and human rights issues in India.

By Mayank Aggarwal
India proposes to open 52 new coal mines of at least one million tonne capacity each, which could increase the country's methane emissions by 45 million tonnes in 20 years
END_OF_DOCUMENT_TOKEN_TO_BE_REPLACED

By Shi Yi
China’s first five-year plan since its 2060 carbon neutrality pledge last year fails to set an emissions ceiling, but draws back from economic growth at any cost
END_OF_DOCUMENT_TOKEN_TO_BE_REPLACED

By Soumya Sarkar
High heat and humidity will take an increasing toll in death and ill-health in India and other tropical countries unless global temperature rise is limited to 1.5 degrees Celsius
END_OF_DOCUMENT_TOKEN_TO_BE_REPLACED

By Deepa Padmanaban
Climate change has hastened the melting of snow in the Himalayas in recent decades, creating unprecedented vulnerabilities that scientists are yet to fully understand
END_OF_DOCUMENT_TOKEN_TO_BE_REPLACED

By Moonis Ijlal, Shreeshan V.
New rules announced by the power ministry on selling surplus electricity from rooftop solar installations could hold back expansion of the sector that has seen slow growth
END_OF_DOCUMENT_TOKEN_TO_BE_REPLACED

By Joydeep Gupta
Climate change made the Uttarakhand flash flood in the Indian Himalayas possible, and poor development policies on building dams and roads made it disastrous
END_OF_DOCUMENT_TOKEN_TO_BE_REPLACED

By Soumya Sarkar
The United Nations has warned that immediate action is needed to face the triple environmental emergency of climate change, biodiversity loss and pollution
END_OF_DOCUMENT_TOKEN_TO_BE_REPLACED
Share This