Large-scale use of pesticides to kill locust swarms in India, which saw the worst outbreak in three decades this year, is hazardous to human health and can potentially harm local ecosystems, and key fauna and flora 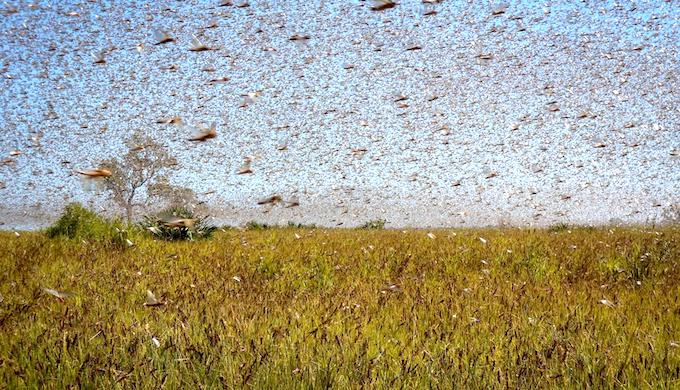 The danger of locust swarms has passed for now. For five months from March 2020, hundreds of field teams were deployed in India and Pakistan to kill locusts that swarmed in several provinces in the two countries.

The situation seems to be easing now. “The desert locust situation continues to improve in southwest Asia,” the Food and Agriculture Organization (FAO) said in its latest update. Locusts destroyed crops in large parts of India and Pakistan from March to July. Experts have warned that such outbreaks can become increasingly frequent in the future.

Once locusts start to breed and swarm, there is very little option but to spray large amounts of insecticides to control the outbreak.

The pesticides that kill locusts have toxic effects on the environment and human health as well. There is also a potential for harm to local ecologies and signature species and friendly pollinators, experts note.

Risk to health and environment

“Generally, these are broad-spectrum chemical insecticides, such as pyrethroids, neonicotinoids and organophosphates, which may pose a risk to human health and the environment,” said environmental toxicologist Harold van der Valk, author of an FAO manual on pesticide risk reduction for locust control.

It is not an easy task to keep the adverse environmental effects of locust control to a minimum. The best way is to control the locusts in the desert areas where they are breeding, said Chetan Desai, a scientist at Sardarkrushinagar Dantiwada Agricultural University in Gujarat.

“Pesticide spraying by locust control boards is not done near farms, residential areas and animal habitats,” said Desai, explaining the ideal scenario. “Spraying is done in places where there is less movement of people and animals. In addition, warning banners are put up to keep people away from such areas.”

“In dealing with desert locust outbreaks, FAO relies on the preventive strategy, which includes early detection of infested areas and rapid response, which includes targeted treatments of locust groups,” said Alexandre Latchininsky, pesticides expert at FAO. “Insect growth regulators (IGRs) and biopesticides are most suitable for such preventive treatments.”

In the case of the 2020 desert locust emergency, heavy rains early in the year tipped the balance by providing favourable conditions for breeding in large areas, and prevention was no longer feasible. Between March to the middle of July, locust swarms were reported from several areas in Pakistan and in as many as seven states in western and northern India.

“Under such conditions, to prevent crop and pasture damage, the most appropriate tool is the use of conventional pesticides, which provide fast and efficient control,” Latchininsky said.

The widespread spraying of harmful chemicals in a large landscape can have an adverse impact, experts said. As the swarms were quite large, large amounts of highly toxic chemical insecticides were used to control their spread, particularly in Rajasthan and Gujarat.

“These chemicals will remain in the ecosystem for long and that is a disaster on local ecosystems,” said Sumit Dookia, a wildlife biologist teaching at Indraprastha University in Delhi.

When spraying is done near inhabited areas, shepherds, farmers, residents of villages (close to areas to be treated) are generally instructed to keep a safe distance from the spraying and avoid re-entering the treated area immediately after the insecticide application.

“However, sometimes these instructions are not respected, or excessive spray drift occurs, and such bystanders could be exposed to the insecticide,” said Harold van der Valk. “When crops are treated for the control of locusts, pre-harvest intervals need to be respected to ensure that insecticide residues do not pose a risk to consumers. Similarly, drinking water sources should never be over-sprayed. However, if such measures are not respected, risks to consumers may ensue.”

For local populations living in the areas treated against locusts, it is important to observe re-entry periods, livestock withholding periods and pre-harvest intervals, FAO guidelines said.

“All the pesticides that are used in locust control pose some risks to human health, although certain products are less hazardous than others,” Latchininsky said.

Chemical insecticides used for locust control are insecticides, which means they kill not only just locusts but also other insects and arthropods present in the environment, some of which could be beneficial ones such as honeybees, other pollinators or natural enemies of locusts.

“In order to reduce this undesirable effect of the friendly fire, several precautions must be taken before and during the locust control operations,” Latchininsky said. “Spraying is done typically in the early morning hours or after sunset when beneficial insect activity is the lowest.”

FAO strongly recommends that special care is given to ecologically sensitive zones, which include nature reserves, wetlands, etc. In such areas, anti-locust treatments should be reduced to a minimum and control operations should be performed with low-risk insecticides, such as biopesticides.

Followed in the breach

These recommendations are followed mostly in the breach in India, alleged Ashish Gupta of Gram Disha Trust, a grassroots non-profit that works with smallholder farmers. “We have heard reports of pesticides being sprayed indiscriminately without strictly following safety precautions,” Gupta said. This has implications for environmental pollution, he maintained.

Latchininsky of FAO, however, said that in terms of the ecosystem contamination, the times when anti-locust treatments were performed with highly toxic and persistent insecticides such as organochlorines are long over. “Currently used insecticides break down rather quickly in the soil or in water,” he said. “So, if applied at correct dose rates, they will not persist in the ecosystem.”

Gupta expressed doubts whether this was the case when spraying was done to control the locust swarms. He pointed out that the pesticides that the Indian government has recommended to control locusts include toxic agents such as Malathion, Chlorpyrifos and Deltamethrin. Organophosphate pesticides such as Malathion and Chlorpyrifos are highly toxic to humans and animals.

These chemicals remain on leaves of vegetation and on the ground, which ultimately enters into the food chain and will be bioaccumulated in the ecosystem, said Dookia. “I am not at all in favour of such a massive scale spraying of highly toxic chemical insecticides.”

Locusts are a part of desert biodiversity and many birds and animals feed on these protein-rich insects. Their onset is also correlated with the breeding season of highly endangered birds like Great Indian Bustard, drongos, bulbuls, sparrows, hawks, eagles and shikras.

The Great Indian Bustard roams around in many of the areas in Jaisalmer where locusts breed. This highly endangered species is fond of eating locusts. “We have seen them running after locusts and eating them by the mouthful,” Dookia said.

Locusts are also eaten by Indian coursers, cream-coloured coursers, migratory raptors, harrier, eagles and falcons also feed on them. “If any bird eats insecticide-sprayed locusts, the chemical will surely impact their health,” said Dookia. “It’s a serious point to note.”

Locust control teams should be sensitized to this issue and they should be asked not to spray pesticides near the habitats of iconic species such as the Great Indian Bustard, he said.

“Last year, I started a campaign with the help of local wildlife volunteers and the ERDS Foundation (a local NGO) and was able to get responses from the district magistrate, divisional commissioner as well as chief wildlife warden,” Dookia said. This resulted in more attention being paid to this. “Probably this could be one of the reasons why last year was a good breeding season for the Great Indian Bustard.”

Locusts are a centuries-old problem, but there are now eco-friendly solutions available to deal with the menace. Experts such as Desai and Dookia say that biopesticides are a good idea.

Agriculture scientist M.S. Swaminathan is also in favour of using traditional solutions rather than chemical pesticides. “The best way in controlling the locust invasion is to spray neem seed decoction over the plants,” Swaminathan said in a statement. “Neem is a strong repellent. Neem also serves as fertilizer.”

There are other biological solutions as well. “Linseed oil, combined with some essential oils, is highly effective in killing locusts, recent research has found.

This was first published in Mongabay India.