Extreme weather events have risen dramatically due to climate change, the United Nations said, urging action on early warning systems to minimise losses and save lives

Over the past 50 years, more than 11,000 disasters have been attributed to weather, climate and water-related hazards, resulting in two million deaths and USD 3.6 trillion in economic losses.

The average number of deaths for each disaster has fallen by a third during this period. But the number of recorded disasters has increased five times and the economic losses have increased by seven times, according to a new report by various UN bodies and international development agencies.

The rise in frequency, intensity and severity of storms, floods, droughts and wildfires as a result of climate change has hit vulnerable communities disproportionately hard.

Despite that, one in three people are still not adequately covered by early warning systems, according to the 2020 State of Climate Services report launched on October 13, on the International Day for Disaster Risk Reduction.

In 2018, around 108 million people required help globally from the international humanitarian system due to these disasters. By 2030, it is estimated that this number could increase by almost 50% at a cost of around USD 20 billion a year, the report says. 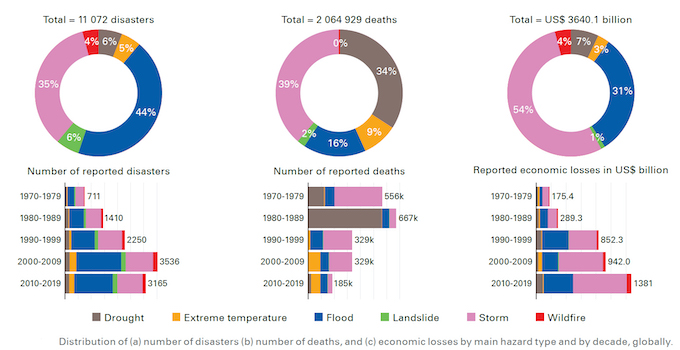 Produced by 16 international agencies and financing institutions, the report identifies where and how governments can invest in effective early warning systems that strengthen countries’ resilience to multiple weather, climate and water-related hazards and provides successful examples.

However, data provided by 138 WMO members countries show that just 40% of them have Multi-Hazard Early Warning Systems (MHEWS). Only 75 countries say they provide impact-based forecasting services.

“Early warning systems (EWS) constitute a prerequisite for effective disaster risk reduction and climate change adaptation. Being prepared and able to react at the right time, in the right place, can save many lives and protect the livelihoods of communities everywhere,” said Petteri Taalas, Secretary-General of the World Meteorological Organisation (WMO), which coordinated the preparation of the report.

“While COVID-19 generated a large international health and economic crisis from which it will take years to recover, it is crucial to remember that climate change will continue to pose an on-going and increasing threat to human lives, ecosystems, economies and societies for centuries to come,“ he said.

An increase in climate-related disasters indicates that more money for adaptation is required, specifically for modern weather stations and related equipment.

Climate finance has improved, crossing the USD half-trillion mark in 2017-18, according to the report. But adaptation finance is only 5% of it. Money for early warning systems is a much smaller fraction.

An estimate by the Global Commission on Adaptation says USD 180 billion will be needed every year during 2020-2030.

The report makes six recommendations to improve the implementation and effectiveness of early warning systems worldwide:

By Anjali Notandas
Concerned about the dangers of climate change and environmental degradation, children in India have taken to activism, demanding their rights to a better future
END_OF_DOCUMENT_TOKEN_TO_BE_REPLACED

By Soumya Sarkar
The rapid warming of the Indian Ocean due to climate change is leading to more cyclones pummelling South Asia, as storms gather more quickly and become more intense
END_OF_DOCUMENT_TOKEN_TO_BE_REPLACED

By Soumya Sarkar
The locust swarms that destroyed farmlands in western and northern India are linked to the warming of the Indian Ocean. Such proliferation is more likely as rainfall patterns change
END_OF_DOCUMENT_TOKEN_TO_BE_REPLACED