The United States under President Joe Biden has re-entered the Paris climate agreement, providing a renewed impetus to act on the world’s deepening climate crisis 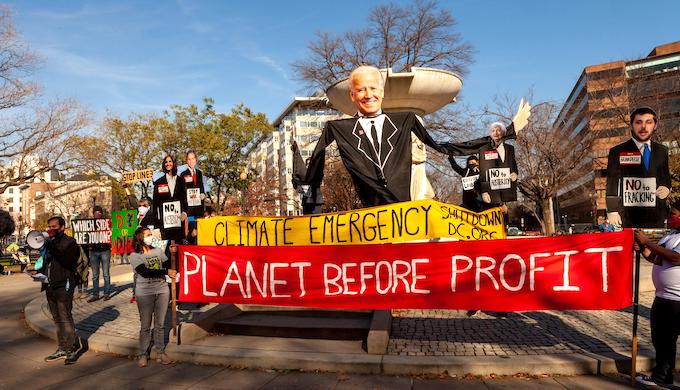 Within hours of assuming office as US President, Joe Biden reversed predecessor Donald Trump’s decision to walk out of the 2015 Paris agreement, bringing the world’s second-largest emitter of greenhouse gases back to global efforts to restrain climate change.

Biden signed the order in the White House on Wednesday, along with other environmental action including the blocking of the contentious Keystone XL pipeline and stopping oil drilling in two national parks. The US will re-join the Paris pact after a 30-day notice period.

The executive action by the new US President is expected to breathe new life into international climate negotiations at the UN climate summit scheduled to be held in Glasgow, UK, in November this year.

The summit, postponed to 2021 due to the Covid-19 pandemic, comes five years after the landmark Paris Agreement that set a target of keeping global warming “well within” 2 degrees Celsius from pre-industrial days. Signatories to the agreement are expected to announce more ambitious plans to achieve the target before the Glasgow summit.

Biden ran on the strongest climate platform of any major presidential candidate in US history. He has promised to combat climate change with a USD 1.7 trillion plan aimed at fighting what he calls the “existential threat of our time.”

“We’re going to combat climate change in a way we have not before,” Biden said in the Oval Office before signing the executive orders, the New York Times reported.

“Internationally, it’s an important way of making clear the US is going to take care of business at home,” David Waskow, director of the non-profit World Resources Institute’s international climate initiative, said in a statement. “There will be an expectation that the US brings forward a new, ambitious target under the Paris agreement.”

Environmental groups in the US have advocated a commitment to cutting greenhouse gas emissions by as much as 50% over the next decade, which will require significant domestic actions.

The climate crisis deepened in 2020 while the world faced the Covid-19 pandemic. The year set new records in extreme weather events, including severe cyclones and wildfires, and the receding of glaciers and melting of ice at both the poles.

Although there was a brief reduction in carbon dioxide emissions due to reduced economic activities triggered by pandemic lockdowns, the world is still heading towards a temperature rise in excess of 3 degrees Celsius by the end of this century, the United Nations Environment Programme warned in its Emissions Gap Report 2020 released in December.

Biden has appointed John Kerry, former US secretary of state under Barack Obama, as the new climate envoy of the US government. There has to be a “wholesale transformation of the global economy” if the world is to reach net zero carbon dioxide emissions by 2050, Kerry said at a G20 business leaders forum.

“We need to all move together, because today very few are on a trajectory of the steep reductions needed to meet even current goals, let alone the targets we need to avert catastrophic damage,” Kerry said in his first remarks after being appointed US climate envoy.

Biden is expected to host an international climate summit ahead of the Glasgow talks.

“At the COP (Conference of Parties, the official name of the annual UN climate summits) in November, all nations must raise ambition together, or we will all fail, together,” Kerry said. “Failure is not an option.”

With the United States re-joining the Paris agreement, there will be increased pressure on countries to raise their climate ambitions. India is well poised to meet these challenges.

India was not only on track to fulfilling its climate commitments but would go further, Prime Minister Narendra Modi had said at the Climate Action Summit jointly hosted by Britain, Italy, Chile and the United Nations in December.

“We must accept that if we have to overcome a serious challenge like climate change, then what we are doing at the moment is just not enough,” the Indian Prime Minister had said. “The time for talking is over; the world needs to act now.”

“Five years after the Paris Agreement, India is among the few developing countries that are not only meeting their green targets but are aspiring to more ambitious climate goals,” India’s foreign secretary Harsh V Shringla wrote in a Reuters article.

“Energy is at the centre of all climate strategies,” Shringla said. “We believe India has become a clean energy powerhouse and is a leader in energy transition from carbon dioxide-producing sources to renewables and non-fossil-fuel sources.”

However, Indian policymakers react with irritation when asked if India would raise its Paris ambition before the Glasgow summit. They see it as an attempt by rich countries to push the responsibility to India. Prakash Javadekar, India’s environment minister, has recently reiterated the government’s demand that developing countries must be given more “carbon space” so that they can catch up with rich countries. The policymakers see any attempt to get India to commit to a “net zero” carbon emission target as a ploy to push action to the future. Why don’t the rich countries talk of actions they are taking now, they respond.

“About half of the emissions cuts needed to put the world on a path to net zero by 2050 will need to come from technologies that are not on the market yet,” Fatih Birol, executive director of the International Energy Agency, told the Guardian newspaper. “Innovation is extremely critical. The US can be a leader in innovation and has a major opportunity – and responsibility – to push for clean technology innovation.”