A lot of the inefficiency in India’s energy sector is routinely laid at the door of power distribution companies (discoms). Such inefficiency also often leads to higher carbon emissions. A couple of new studies say one of the main reasons is that electricity utilities in many developing countries, including India, often don’t get fully paid by consumers for the power they supply.

Ailing state-owned discoms continue to hamper the efficient functioning of energy generation and transmission. By May 2020, Indian discoms – owned by state governments – owed overdue payments to generators to the tune of INR 1.5 trillion (USD 16 billion), creating a liquidity crunch across the entire power sector, reveals a study titled The Curious Case of India’s Discoms: How Renewable Energy Could Reduce Their Financial Distress by the Institute of Energy Economics and Financial Analysis (IEEFA).

This has led to widespread outages and rationing of power, according to another study led by researchers at the Energy Policy Institute at the University of Chicago (EPIC). This poor electricity access may be a consequence of society treating electricity as a right rather than a commodity to be bought and sold, said the study titled The Consequences of Treating Electricity as a Right.

This sets off a vicious cycle, says the EPIC study. Consumers regularly don’t pay their full bills and governments often tolerate this. Power utilities then lose money every time they supply more electricity.

Eventually, these companies become bankrupt and cut off supply because they can no longer pay generators without recovering costs from consumers. Finally, since customers receive poor energy supplies, they are even less likely to pay their full bills, the study said.

Over the past two decades, India has improved access to reliable and affordable energy critical for economic growth. Hundreds of millions of households have been connected to the electricity grid for the first time.

But the growing demand for energy in India has largely been met by highly-polluting coal. As a result, the South Asian nation is now the fastest growing carbon emitter in the world, and annual concentrations of particulate pollution have increased by 60% between 2000 and 2016. These pollution and carbon emissions will only grow as hundreds of millions more citizens gain access to reliable electricity.

Studying power supply and consumption in impoverished, rural areas of the eastern province of Bihar, researchers found that the link between payment and supply had been severed. Customers on an average received about 17 hours of electricity a day, and many paid less than 20% of their bills.

Areas that paid more didn’t necessarily get more power. When researchers combined this data with observations from several field experiments in countries like Brazil, Pakistan and South Korea, they found that this was indicative of a broader trend. 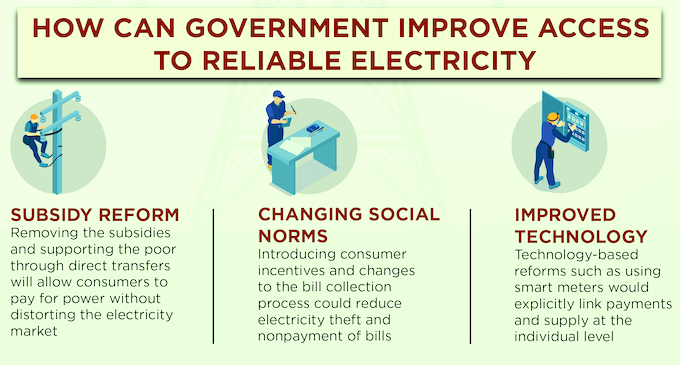 This is despite that fact that India’s power consumption per person is near the lowest among big countries globally. The IEEFA study says that in 2018-19, per capita power consumption was 1,181 kWh, even after consumption increased around 6.2% in the past decade, thanks to strong economic growth.

Power consumption, however, is unequal, with some states recording an increase of more than 10% every year, the IEEFA study shows.

Power distribution, it says, is the weakest link in the entire value chain of the Indian electricity sector. Dominated by conventional sources of energy (coal, diesel, gas, nuclear and large hydropower) and a progressive shift towards renewable sources (wind, solar, bio and small hydropower), India’s power sector is saddled with various issues.

“It is critical to provide electricity to the poorest but doing so in a way that causes electricity markets to fail harms everyone,” said EPIC study’s co-author Michael Greenstone. “Our view is that no solution will work in the end unless the social norm that electricity is a right is replaced with the norm that it is a regular product that people pay for, just like food and cell phones.”

The EPIC study suggests three changes to the current system: subsidy reform, changing social norms and use of improved technology.

Since consumers of all incomes often enjoy electricity subsidies, the subsidies are frequently regressive and poorly targeted, it said. Removing these subsidies and supporting the poor through direct transfers will allow them to pay for power without distorting the electricity market.

Introducing consumer incentives and changes to the bill collection process could reduce electricity theft and non-payment of bills, the study suggested. It shows that theft is not restricted to the poor. Indeed, larger consumers account for most of the losses.

Technology-based reforms such as using smart meters would explicitly link payments and supply at the individual level, the study says.

Among other ideas to encourage payment of bills, researchers worked with the state-owned electricity distribution company in Bihar on an innovative pilot programme that linked the amount of electricity supplied to consumers to payment rates in their neighbourhood. Areas that paid their bills more often were thus rewarded with fewer outages.

Additionally, power theft is one of the main reasons why discoms are in a bad financial state, said Anant Sudarshan, South Asia Director of EPIC.

One concern with the present tariff structure is that non-payment may be tolerated for some consumers (poor consumers) because they have low ability to pay, he said. This is a legitimate policy goal but in effect this is a “hidden subsidy” that also has the effect of strengthening the norm that payment is not essential for power.

A possible solution is to instead make direct transfers to low-income consumers, Sudarshan said.

“At the heart of our recommendations is the goal of achieving universal access to electricity that runs reliably 24-hours a day, every day of the year, and the economic growth that it facilitates,” said Sudarshan. “Most of these policies complement one another and seek to change how people think about electricity, that is, to break the social norm that it is okay to not pay their full electricity bills.”