A long-term low-carbon economic strategy can help a country to reduce policy uncertainty, which would help investment decisions by both the public and private sectors 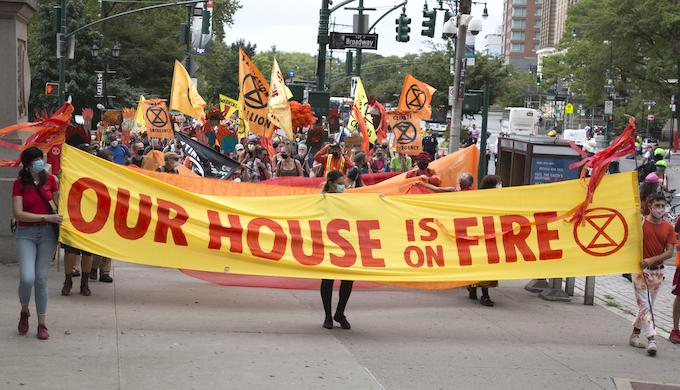 A march by climate activists (Photo by David Grossman/Alamy)

Unlike the Kyoto Protocol, which negotiated a set of binding commitments from countries and fixed mitigation responsibilities, the 2015 Paris Agreement seeks to create a cooperative and level playing field by allowing countries to voluntarily submit their climate goals, known as nationally determined contributions (NDCs).

As many as 190 countries have submitted their NDCs till January 2021 to the United Nations Framework Convention on Climate Change (UNFCCC). NDC is a commitment from a country submitted to the UNFCCC with measures around policy and implementation that will contribute to achieving the emission reduction targets of the Paris Agreement. These NDCs are supposed to be updated at regular intervals.

However, even if the goals in the submitted NDCs are met, according to the United Nations environment Programme’s (UNEP) Emissions Gap Report 2020, the world is still heading for a catastrophic temperature rise above 3 degrees Celsius (from the pre-industrial level) by end of this century.

This is far beyond the Paris Agreement goals of limiting global warming to well below 2 degrees Celsius and trying to keep warming within 1.5 degrees rise. The world is already 1.2 degrees Celsius above the average temperature in pre-industrial times.

UNEP’s 2020 report also finds that a brief dip in carbon dioxide emissions caused by the Covid-19 pandemic will make no significant difference to long-term impacts of climate change.

Out of the currently submitted NDCs, very few are ambitious enough in terms of their emission reduction targets to help achieve the stated goals of the Paris Agreement. For instance, India’s existing NDC targets till 2030 are compatible with 2 degrees rise, which represents fair share of a global effort, even while it allows the country’s total emissions to increase, according to the Climate Action Tracker.

As per Article 4, paragraph 19, of the Paris Agreement, all countries should strive to formulate and communicate long-term low greenhouse gas emission development strategies, taking into account their common but differentiated responsibilities and respective capabilities (CBDR-RC), in the light of different national circumstances.

Countries are expected to communicate their long-term strategies that would lead to low-carbon growth by the year 2050. The kind and nature of strategy to be followed are not delineated within the pact, nor is there a pathway to decide what kind of strategy a nation must follow while elucidating a mid-century strategy or long-term strategy (LTS).

The LTS contains details of a country’s ambition towards mitigation and adaptation potential to achieve low-carbon growth. The scenario planning is by 2050. LTS communicates what the country can do until 2050 to ensure that the global average temperature rise is not beyond 2 degrees Celsius by the end of this century.

The nature of the LTS document has meant that countries can map out national circumstances and effectively communicate domestic interest internationally. But, with no clear-cut guidelines, governments can easily choose to work around the LTS document in the manner they wish to.

LTS preparation requires significant resources and efforts. First, there is a need for detailed emissions and economic modelling for the entire economy as well as for key emitting sectors. Broadly, five key sectors, including energy, industrial processes and product use, agriculture, waste and land use and forestry, need detailed emissions and economic modelling till 2050.

Second, there is a need for extensive stakeholder consultation to seek inputs from those who would be impacted by and contribute to the implementation of the policies and programmes to reduce greenhouse gas (GHG) emissions. The LTS proposal based on low carbon emissions and economic modelling will have to be revised to account for the concerns and inputs of the stakeholders.

Even then, it is not sure if modelling will turn out to be an effective instrument of planning. Thus, it is important for governments to take into confidence their people about the significant changes and efforts that would be needed to de-carbonise national economies.

There are some key differences between NDC and LTS:

Planning and frequency: In terms of planning, the NDCs generally plan for 10-15 years. The LTS on the other hand is prepared for a duration till 2050. NDCs have to be updated every five years, including going through a thorough review process, while the frequency of updating LTS has not been specified yet.

Targets: NDCs urge developed countries to take a lead in taking economy-wide reductions, while developing countries should focus on mitigation efforts with an aim to have economy wide reductions considering national circumstances. There is no such requirement or distinction for LTS development.

Accounting and reporting: Suitable accounting methods have to be followed by governments with regard to their NDCs. Principles of environmental integrity, transparency, accuracy, completeness; comparability and consistency have to be followed. Double counting must be avoided in NDC reporting. No specifications have been provided for reporting related to LTS. There are strong reporting mechanisms present for NDC’s with focus on regular information flow. No such requirement exists for LTS.

Identifying and developing frontier technology sectors: LTS development can help identify frontier technology sectors which can be the economic growth engines for the future and support decarbonisation of Industrial sectors. For example, it is in India’s interest to actively promote international innovation, technology learning and diffusion as India does not have cost-effective reserves of natural gas or coking coal and so the development of a renewables plus hydrogen economy is in its interest. Hence, investment in hydrogen fuel cell technology development for use in transport and aviation sector can lead to development of a new sector in the country.

However, if there is no clarity regarding support for adoption of such technologies in medium to long term then investors would ideally avoid research, development and demonstration (RD&D) investments. At the same time, there would be intense competition for rare-earth elements (REEs) that are critical enablers for high-technology devices. There is a need to ensure ease and accessibility of these in an equitable manner.

Support for LTS development not only helps the country developing their LTS, but also helps the international community know about financial and technical support requirements to help achieve the goals of the Paris Agreement.