Why India and China are driving the global green shift

In his new book, John Mathews argues that the two powers are destroying the fossil fuel status quo 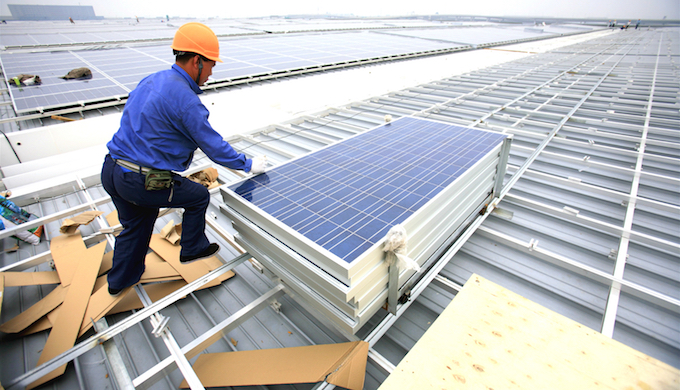 China has moved away from dependence on fossil fuels and external resources and has shifted instead to renewables and a circular economy, and India is following closely behind, John Mathews said in an interview. Edited excerpts:

In your latest book you argue that we’re living through a profound industrial transition – a global green shift in terms of how energy and resources are used – led by India and China. What does this transformation look like and what’s driving it? Are we really saying goodbye to fossil fuels?

In my book I seek to establish an argument for the green shift that is grounded in the realities of manufacturing and the industrialisation processes that are underway in countries like China, India and Brazil. So my argument does not start with climate change and how it is the great moral imperative of our time, but rather with the options available to China as it proceeds with the greatest economic transformation ever witnessed, at a scale never attempted before.

I argue that China is left with few options other than to seek to resolve its energy security issues through shifting to renewables, and its resource security issues through shifting from a linear to a circular economy. Much of the book is devoted to reviewing the evidence that China is indeed moving swiftly to adopt renewables and to promoting a circular economy (e.g. closing loops to turn outputs into inputs, and engaging in urban mining).

I describe this as a shift, rather than an accomplished fact. There is a clear shift by China, for example, to adopt green energy resources – but China’s energy system is still dominated by fossil fuels (mainly coal) and this will be the case until China’s green shift swings the entire energy system towards green sources by some time in the 2020s.

Do you think China is ready to take a global leadership role on climate change  at a point when the US and Europe appear to be retreating?

China is emerging as a global leader in renewables and circular economy issues to meet its own concerns over energy and resource security – not in order to be a global leader in climate leadership. But if the US turns its back on promoting green industries and the EU slows down in its support for the green shift, then China is likely to find itself in a leadership position willy-nilly. Of course since building renewables industries translates into business leadership in these industries, any move away from direct competition – as in the case of the US under President Trump – plays to China’s manufacturing strengths.

What about India’s transition? After all, it has 400 million people without access to electricity and where development plans depend heavily on fossil fuels

India is in many respects emulating the China model of industrialisation but about 10 to 15 years behind. Thus China initiated its rapid growth with a focus on manufacturing and exports, and now India is doing the same. China then moved to build infrastructure in a big way, and now India is moving to do the same. Then China moved away from dependence on fossil fuels and external resources (the linear economy) and shifted instead to renewables and a circular economy and again India is following closely behind. The present national government in India under Prime Minister Modi is going all out for renewables including solar PV and wind and is discontinuing the earlier dependence on coal. This is a strategy that can be expected to continue.

There are some great examples of advanced circular economy solutions coming out of China and elsewhere – can you describe some of these you find most exciting?

What is distinctive about the Chinese approach to closing industrial loops is that it is able to focus its efforts on existing industrial parks, where there are already agglomerations of firms that can interact and find ways to share resource and energy flows. With my colleagues Dr Hao Tan and Professor Mei-Chih Hu I have been looking at these processes in industrial parks like the Suzhou New District and the Nanjing Chemical Industrial park as well as the Tianjin eco-city. In these industrial parks, firms are induced to cooperate with each other along value chains, e.g. in recycling copper for use in printed circuit boards in the Suzhou park, or in introducing circular flows in the carbon pathway from coal to carbon dioxide and methanol in the Nanjing park.

China is making great strides in dealing with waste from electrical and electronic goods (e-waste), now emerging as the largest flow of waste products globally. The key here is to extract precious metals from e-waste in a process called “urban mining” which is a key example of the circular economy in action, reducing reliance on external resources obtained through virgin mining. China is pioneering commercial collection points for e-waste, which send their products to urban mining companies that then extract copper, gold and other precious metals.

Have these solutions been driven by government targets and incentives, or grassroots entrepreneurs and innovation?

The key advantage that China has in promoting its green shift is that it has governments at national and provincial level that are prepared to set and pursue these targets. China is able to enrol its development banks to ensure that finance plays its role in achieving the industrial targets, as laid down for example in successive five year plans. So China deploys top-down target-setting and government action as well as vigorous entrepreneurial activity, where risks are taken in pursuit of targets and competition can be intense. One area where such competitive forces are displayed is in the emergence of numerous green sectors of the China economy.

You argue this green shift frees countries from geopolitical constraints and competition over scare resources. What about the resources needed for green tech –lithium for batteries, rare earths for solar panels and wind turbines etc.?

There are concerns that while China is cleaning up its pollution at home, it will continue to export dirty energy and industries overseas. Is this happening?

While there is no doubt that China is rapidly greening its domestic energy system and resource-intensive activities, the evidence as to its external orientation is less clear. China’s grand One Belt One Road strategy of linking with countries across Central Asia to build a new Silk Road offers numerous opportunities for Chinese firms to export their fossil fuel and large scale hydro technologies. But there are also growing opportunities for China to export its green technologies and products, particularly as other industrialising countries like India or Brazil or the UAE make strong moves to participate in the green shift themselves, for the same reasons that have motivated China; energy and resource security.

Can we expect losers in this green transition? Will less developed countries be able to find their place in this new industrial system or will competition over green manufacturing lead to tension or even trade wars?

The losers in the green transition will be the countries that fail to rise to the challenge or that continue with established fossil fuel dependence for reasons of industrial inertia. Thus we see tropical islands like Jamaica or Barbados in the Caribbean surrounded by natural resources but constrained to import most of their energy through fossil fuels. The winners in the transition will be the countries that are prepared to invest in industry policy, and are prepared to allow governments to intervene in the markets. One of the reasons that China’s green strategies are so interesting is that they clearly draw from and build on the prior experiences of East Asia in using the strategies of the developmental state. This is what my colleagues Dr Elizabeth Thurbon and Dr Sung-Young Kim have called developmental environmentalism.

Global Green Shift: When Ceres Meets Gaia by John A Mathews was published by Anthem press in February 2017