Rich nations must pay for climate loss and damage 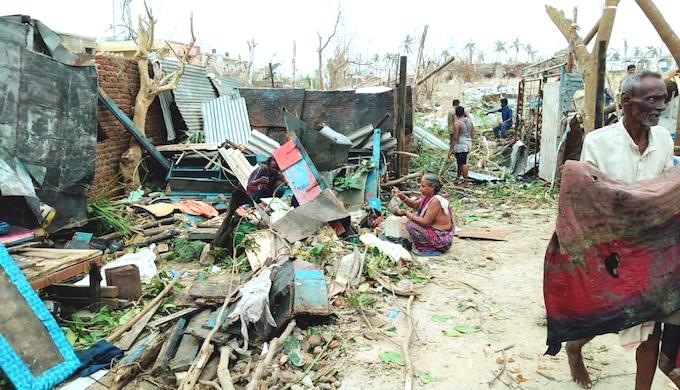 Wealthy countries need to immediately provide public climate finance, based on their responsibility and capacity to act, said a new civil society report. These nations need to support not only adaptation, but to also address the loss and damage already being caused by the climate crisis in poorer countries, the report said.

The US and EU are jointly responsible for more than half (54%) the cost of repairing the damage caused by climate disasters in the Global South, said the report — Can Climate Change-Fuelled Loss and Damage Ever Be Fair? — that was endorsed by nearly 100 civil society organisations, including ActionAid, WWF and Care International.

The world has to effectively respond to climate disasters, change food systems to be more resilient and deal with frequent migrant crises, the report said. “Millions of people around the world are already ravaged by a climate crisis they didn’t cause,” said Sven Harmeling, global policy lead climate change and resilience, Care International.

“Climate fuelled disasters are devastating the lives of some of the poorest people across the globe, people who have done least to fuel this crisis are losing their homes, their food, and their livelihoods,” said Nafkote Dabi, climate change policy lead for Oxfam. “Rich countries must adopt ambitious emissions reductions plans to minimise the impact of the crisis and contribute their fair share to support frontline communities adapt and recover from loss and damage.”

The report was released ahead of the 25th Conference of the Parties to the UN Framework Convention on Climate Change (COP25), starting in Madrid next week.

The civil society organisations calculated the so-called fair share of responsibilities of countries by using an equity analysis. It was based on historic contributions to climate change through greenhouse gas (GHG) emissions, and nations’ capacity to take climate action, based on national income after meeting basic living standards.

Using a 1950 baseline, the report found that the US is responsible for 30% and the EU 24% ‘fair share’ benchmark, compared to India’s 0.5%. Based on estimates of loss and damage costs in developing countries, the report suggested that new and additional finance of USD 50 billion should be provided by 2022, rising to a minimum of USD 300 billion by 2030.

For a representative set of countries and groupings, population, income, capability and responsibility for 2010, and combined Responsibility and Capability Indicator, or RCI, for 2010, 2020, and 2030 (Source: Climate Equity Reference Project)

“The climate emergency is the greatest equity challenge of our time,” said Harjeet Singh, global lead on climate change for ActionAid. “The current, unjust system for responding to climate disasters is pushing developing countries further into poverty and debt.”

“One way to focus efforts would be to enhance nature-based solutions, thereby minimising future loss and damage while also addressing the climate crisis,” said Sandeep Chamling Rai, senior advisor on global climate adaptation policy for WWF.  “If we are to avert chaos, developed countries must prioritise funding for loss and damage.”

The equity analysis of the report was developed by Sivan Kartha, scientist at Stockholm Environment Institute. It is based on the principle that all countries must undertake at least their fair share of the global effort to tackle climate change.

Some countries have an even greater ethical duty to act than others: those with higher income and wealth, level of development and access to technologies, or who have already emitted a great deal for a long time, and thrive from the infrastructure and institutions they have been able to set up because of this.

Responsibility reflects a nation’s contribution to the planetary GHG burden, and is based on cumulative GHG emissions since a specified particular historical start year, and can consider the emissions arising from luxury consumption more strongly than emissions from the fulfilment of basic needs.

By Nambi Appadurai
We have to invest in resilience-building measures, especially in health infrastructure, and weather and disease forecast systems, addressing training and adaptive capacity needs
END_OF_DOCUMENT_TOKEN_TO_BE_REPLACED

By Mandakini D. Surie
The Covid-19 pandemic has shown that universal access to water is critical to public health, sustainable development and economic growth. Our politicians must act now
END_OF_DOCUMENT_TOKEN_TO_BE_REPLACED

By Jillian Du, Robin King, Radha Chanchani
There is an urgent need to address shortcomings of social distancing and hand washing in crowded cities with unequal facilities that will help build better resilience to future crises
END_OF_DOCUMENT_TOKEN_TO_BE_REPLACED

By Soumya Sarkar
Billions of people will suffer from water stress and deprivation that is aggravated by climate change, the United Nations said in a report on World Water Day
END_OF_DOCUMENT_TOKEN_TO_BE_REPLACED

By India Climate Dialogue
Six experts outline what Britain needs to do as it hosts the UN climate summit in 2020, a crucial year
END_OF_DOCUMENT_TOKEN_TO_BE_REPLACED

By Joydeep Gupta, Sapna Gopal
But takes a regressive step in this year’s budget with a huge allocation for coal
END_OF_DOCUMENT_TOKEN_TO_BE_REPLACED

By Joydeep Gupta
It’ll take a global system change if this wish of former UK energy minister Claire O’Neill, who will head the next United Nations climate summit in Glasgow, were to come true
END_OF_DOCUMENT_TOKEN_TO_BE_REPLACED
Share This