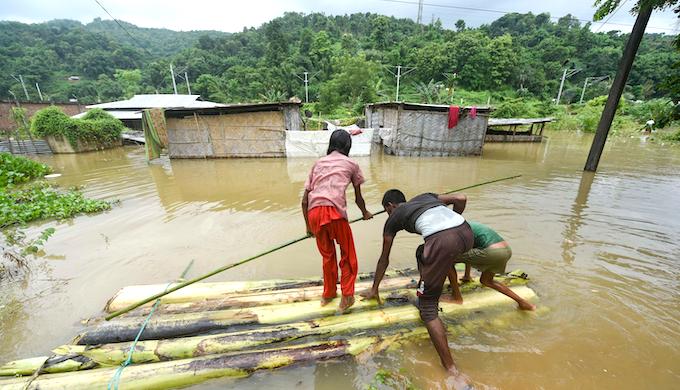 While India has been dealing with the damaging impacts of the ongoing Covid-19 pandemic, it also faces an increase in extreme weather events. In the last few years, we have experienced record high temperatures, recurring forest fires, repeated floods and unprecedented warming of oceans. More recently, floods in Odisha , Cyclone Amphan on the eastern coast and the swarm of locusts hitting even the country’s capital bring to attention the real threat of climate-related disasters.

These extreme events are adversely impacting the health of our economy, people and environment. The year 2019 has been recorded as a significant year of infrastructural destruction and deaths (of approximately 1,500 people) by disasters.

Central and state governments are bringing forward initiatives to enhance capacity to cope with these disasters. Although we have found immediate solutions to tackle the impact on our people and their livelihoods, state policymakers are adopting sustainable practices in thinking long-term on abating and addressing the near realities of these disasters.

We also know that it is the most vulnerable that have been affected by the pandemic as well as other disasters. What then are states doing to build resilience and adapt pathways that effectively respond to the frequency and impact of extreme events such as these?

Ambitious changes in policy and governance are crucial to ensuring the safety and security for people’s lives and livelihoods. The Intergovernmental Panel on Climate Change (IPCC) predicted a timeline of 11 years from 2018 for nations to prevent irreversible damage caused by climate change.

India’s diverse geography requires that states play a significant role in shaping customised and relevant policies to address the fragility of its systems. Moreover, some states, specifically those in geographically hotter regions and with bigger cities, have an even more significant task ahead of them.

State-specific climate action plans, or SAPCCs, are key levers to bringing policy to action. These action plans have given states the necessary platform to access funds, collaborate with experts and synchronise efforts with one another and with the central government.

In Gujarat, climate change departments are working with practitioners and experts to identify their priority areas and employ scientific approaches to address climate vulnerabilities. The state, under the guidance of the Gujarat Ecological Education and Research (GEER) Foundation, has set up an initiative to enhance the adaptive capacity of natural resource-dependent communities of agricultural, coastal fishing and pastoral sectors in the Kachchh region. The initiative is funded by the National Adaptation Fund for Climate Change.

“The revision of the State Action Plan on Climate Change is being carried out with the help of Indian Institute of Technology Gandhinagar and Indian Institute of Management Ahmedabad,” said Shwetal Shah, technical advisor, climate change department, Gujarat. “A specific chapter on vulnerability assessment and mapping of various state policies are included in this plan in order to define the state’s response to challenges arising due to climate change.”

Assam, a north-eastern state that was on high alert during the recent Cyclone Amphan, is paying close attention to causes of frequent and unpredictable rains that have led to severe floods in the region. So far, they have identified widespread deforestation, increase in greenhouse gasses, abnormal temperature rises and destruction to biodiversity as key contributors to these floods.

“Before addressing climate change impacts, we need to understand the causes,” said Mrinal Krishna Choudhury, additional director, Assam Energy Development Agency. “Assam is a perennial victim of annual floods and this year is no different. One of the major causes of it is deforestation. Deforestation leads to removal of top cover of soil and loosens it. Water does not percolate and thereby runs off rapidly causing floods. This also leads to erosion resulting in siltation creating havoc.”

“There is an urgent need to integrate climate change impacts in the planning process to contain deforestation with conviction and promote afforestation aggressively in a mission mode,” Choudhury said. 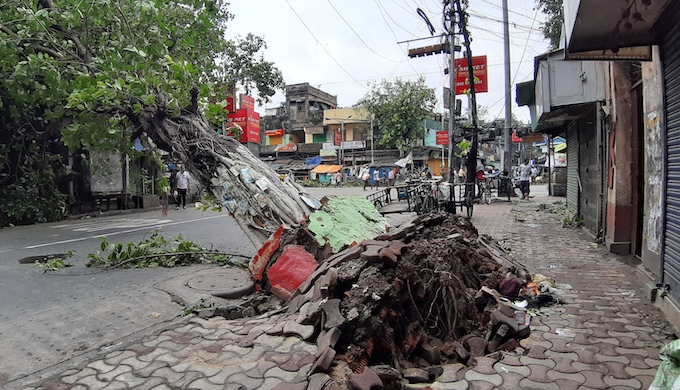 Trees uprooted by Cyclone Amphan tore down shops and telephone wires, leaving millions off the grid in Kolkata (Photo by Wikimedia Commons)

Increased temperatures and the receding of glaciers in the Himalayan regions is not only causing water shortages but also contributing to sea level rise. One-third of the Indian population belonging to nine states lives in coastal regions and is at high risk due to sea level rise. Increased storm surges, severe cyclones and floods are likely to become more frequent, a recent report by the Ministry of Earth Sciences states.

The increase in extreme events puts severe stress on the natural and urban ecosystem of the country, putting pressure on freshwater resources, causing land degradation, damages to infrastructure and impacting food and water security and livelihoods of billions of people.

Such impacts pose a grievous threat to the agrarian economic nature of the country with major consequences to socio-economic development.

Madhya Pradesh has set out to use traditional water sourcing as a means to bring quality water for its citizens in Indore, its most populous city. City and state climate change bodies are working together to enhance the adaptive capacity of their local corporations to address water shortage by conserving and rejuvenating 330 of Indore’s traditional water supply sources with community participation.

Food security is also threatened by the locust infestations across five states in India. The increase of the devastating locust swarms could be due to abnormal changes in the regional climate of the states, according to Lindsay Stringer, professor of environment and development at University of York.

“As temperatures increase with climate change, there is a tendency for more crop destruction from locust swarms,” Stringer said. “It’s difficult to control them as well because the kinds of pesticides that are used tend to damage other insects too, so can be very disruptive to food webs.”

“The combination of climate change and pest invasions on top of other climate impacts and Covid-19 point towards the need for researchers to consider the multiple interactions between different hazards,” Stringer said. “We need a more joined up approach that takes into account whole systems if we are to be able to adequately protect livelihoods and support food security.”

Despite the push from states in doing what they can to address these severe climatic events, protecting the people and ensuring stability, for medium- and long-term change to take place, the provinces need to prioritise planning in an integrated way, according to ecologist Harini Nagendra.

“Currently, state plans are largely created and implemented in silos – energy, transport, construction etc,” Nagendra said. “We need an integrated plan that cuts across these, for example, looking at transport in a way that also encourages behavioural transitions to public transport while strengthening public transport, or which focuses on the implications of reduction in carbon emissions for social justice and systemic issues as well.”

There is also need for a focus on nature-based solutions for climate change, Nagendra said. “For instance, coastal areas need to look at restoring mangroves instead of building protective walls,” she said. “Heat-prone areas need to focus on planting trees and restoring water bodies in addition to white roofs and phone-based SMS alarms for dealing with heat waves.”

When it comes to the impacts of human-induced climate change, science and policy need to work simultaneously to ensure states are prepared for the grim future predicted by climate scientists. These include steps taken by the government of Gujarat to address climate vulnerabilities using scientific models.

As more frequent extreme events arise in the medium to long-term future, the more vulnerable states in particular need to be equipped to combat the aftermath of such events and avoid major climate catastrophes.

The Under2 Coalition is enabling states to do that by bringing collaboration and knowledge for states to commit to ambitious climate actions in line with the Paris Agreement. The fight against climate change can only be won if social justice is coupled with climate action to ensure no one gets left behind as we tackle one of the biggest threats the country has seen.