People in Tamil Nadu have come out strongly in favour of the state government’s ban on throwaway, single-use plastics such as carry bags and cups

Arun Kumar, a vegetable seller in Chennai, showing the cloth bags at his shop. He has stopped selling anything in plastic carry bags since the inception of the ban on single-use plastic. Kumar said that he charges INR 10 (USD 14 cents) for each bag if some customer is not carrying his own bag. He said most customers carry their own bags and he hardly sells five to 10 bags a day (all photos by Athar Parvaiz)

With India playing host, Beat Plastic Pollution was the theme of the World Environment Day last year. Even as the campaign urges governments, industry and communities to come together and explore sustainable alternatives to plastics, single-use plastics continue to be in use in almost all the states across India despite 25 states and union territories in the country having some form of ban on the use of single-use plastic for years now.

But the south Indian state, Tamil Nadu, seems to be quickly putting itself on a green path by curbing plastic pollution despite being the latest state to ban single-use plastic. Ranked as 11th largest state by area and sixth largest state by population in India, Tamil Nadu begin 2019 on a green note with the state government’s order, issued on June 5, 2018, of the ban on single-use plastics taking effect from January 1 under the provisions of the Environment (Protection) Act, 1986.

A man carrying stuff in a jute bag as he enters Chennai’s Marina Beach along with his family. Marina beach is one of the most polluted beaches in India.

What is extraordinary about this official ban on single-use plastic is the role being played by people for weeding out plastic from Tamil Nadu’s markets and, in effect, from its land and water bodies.

A shopkeeper selling reusable bags in a fish market in Chennai. An organiser of the market, Murugan, said that a lot of plastic bags were being used in the fish market before the ban. But now, he said, plastic has completely vanished from the market

“Plastic is ruining our land and water bodies besides causing flooding in Chennai almost every year by clogging drains. I think people have realised it and are doing their bit to weed it out,” said E. Dharmaraj, a lawyer at Madras High Court. “The way I see people carrying their own reusable bags, I think we are switching over smoothly,” said Ramya Ananthakrishnan, a doctor in Chennai.

The cooperation of people with the government for successful implementation of the ban is quite visible in the markets. The shopkeepers are selling products in paper and cloth bags, while most of the customers can be seen carrying jute bags and other reusable bags for purchasing grocery and other items. Some shopkeepers have started offering a slight discount if people carry their own bags.

A woman carrying fish she has bought from the market in two non-plastic bags. Since the ban on plastic carry bags came into force on January 1, most people carry their own bags to buy fish

“We feel overwhelmed by the positive response from people. They are learning very fast how they have to rid Tamil Nadu of plastic,” said Sai Prassad, Public Relations Officer of Tamil Nadu Pollution Control Board (TNPCB).

According to D. Karthikeyan, Commissioner of Greater Chennai Corporation (GCC), apart from causing pollution, plastic waste has been mainly responsible for blocking drains. “We have been increasingly witnessing it since 2015 as plastic waste is not only blocking the small drains, but major drains as well,” the commissioner said.

Raman, a flower seller in Chennai, said that he has stopped selling flowers in plastic bags after the government imposed a ban

Mahesan, Chief Engineer, Buildings, Mechanical and Solid Waste Management at GCC, said the clogging of waterways results in stagnation of water which leads to breeding of mosquitoes and causing diseases like malaria and dengue among people.

What is also noteworthy is the strategy adopted by the Tamil Nadu government for successful implementation of the ban. The state government provided a transition period of six months, from June 5, 2018 to January 1, 2019, for everyone to get accustomed to the new eco-friendly alternatives to plastics.

Plastic refuse in Chennai’s Koovum Canal, which used to serve as a waterway for transport from Chennai to Nellore in Andhra Pradesh. Government officials and residents of Chennai say that flooding in the city is often caused by blocking of drains because of plastic pollution

Though Tamil Nadu Plastics Manufacturers’ Association (TAPMA), which represents some 8,000 plastic manufacturing units in the state, has criticised the ban and called for its withdrawal, the Madras High Court has rejected its plea to quash the ban on single-use plastic. TAPMA says that the ban allows multinationals to sell their packaged projects, but disallows small retail outlets and grocery shops to use plastic which, TAPMA argues, will impact 200,000 small business units. 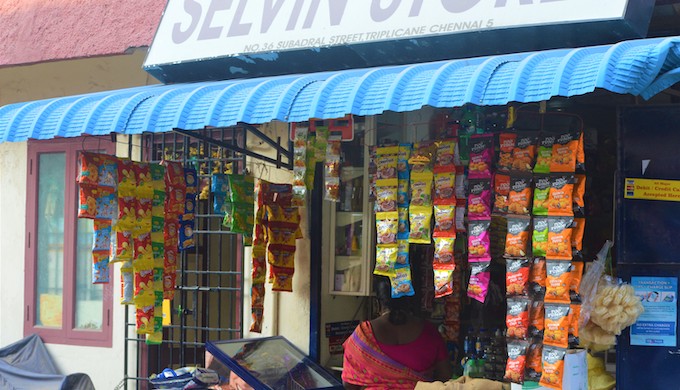 Tamil Nadu Plastics Manufacturers’ Association (TAPMA), which represents some 8,000 manufacturing units in the state, says that the ban allows multinationals to sell their packaged projects, but disallows small retail outlets and grocery shops to use plastic which, TAPMA argues, will impact 200,000 small business units

But Prassad said that the Tamil Nadu government has plans for taking further decisions to ban all kinds of plastics and impose heavy fines on those who don’t comply. “So far, no need of imposing fines was felt as people are willingly cooperating. How plastic bags are going out of use is quite apparent given that community dustbins now contain no plastic bags as compared to their heavy presence before the ban was implemented,” Prassad said.

By Shally Seth Mohile
Weak consumer appetite, lack of charging infrastructure and a high payback period is holding back adoption of electric cars for personal use in India
END_OF_DOCUMENT_TOKEN_TO_BE_REPLACED

By Soumya Sarkar
In a promising outlook for light mobility, penetration of electric 3-wheelers in India may rise up to 75% by 2030, followed by 2-wheelers at 35%
END_OF_DOCUMENT_TOKEN_TO_BE_REPLACED

By Soumya Sarkar
Renewable power is surging despite the Covid-19 crisis and is on track to become the largest source of electricity by 2025, ending the dominance of coal
END_OF_DOCUMENT_TOKEN_TO_BE_REPLACED

By Anjali Notandas
Concerned about the dangers of climate change and environmental degradation, children in India have taken to activism, demanding their rights to a better future
END_OF_DOCUMENT_TOKEN_TO_BE_REPLACED